There’s a first time for everything. Todd Poquette, along with friend and cyclist Marc Salm, just finished a crazy epic feat: riding over 1,000 miles in under 10 days on a brand new route — circumnavigating Michigan’s Upper Peninsula (UP). (Technically, some of their “route” existed, but most of it wasn’t marked on any map, or documented anywhere online.)

They dubbed the trip Project Adventrus, a personal adventure and goal tied to a greater mission. “My intention is to make Project Adventrus the platform for creating extensive bikepacking and adventure routes here in the UP,” said UP local Todd Poquette.

Not only is 1,033 miles in 10 days pretty terrific, but so is the terrain and scenery.

Project Adventrus was a 1,033-mile circumnavigation of the Upper Peninsula on bicycles. The route followed dirt roads, gravel, singletrack, and ORV trails. The team experienced rain, sleet, hail, snow, freezing temps, miles of subpar terrain (think mud), literal roadblocks, and some serious bushwhacking. And to the best of their knowledge, the journey had never been done before.

“We spent hours scouring GoogleMaps, searching for trails and roads that would keep us off the beaten path. Much of the route was unverified beyond a GoogleMap verification that a road was there at one time,” said Poquette. “It was with intention we went into the ride not knowing what we’d face, or if the roads would even be there.” 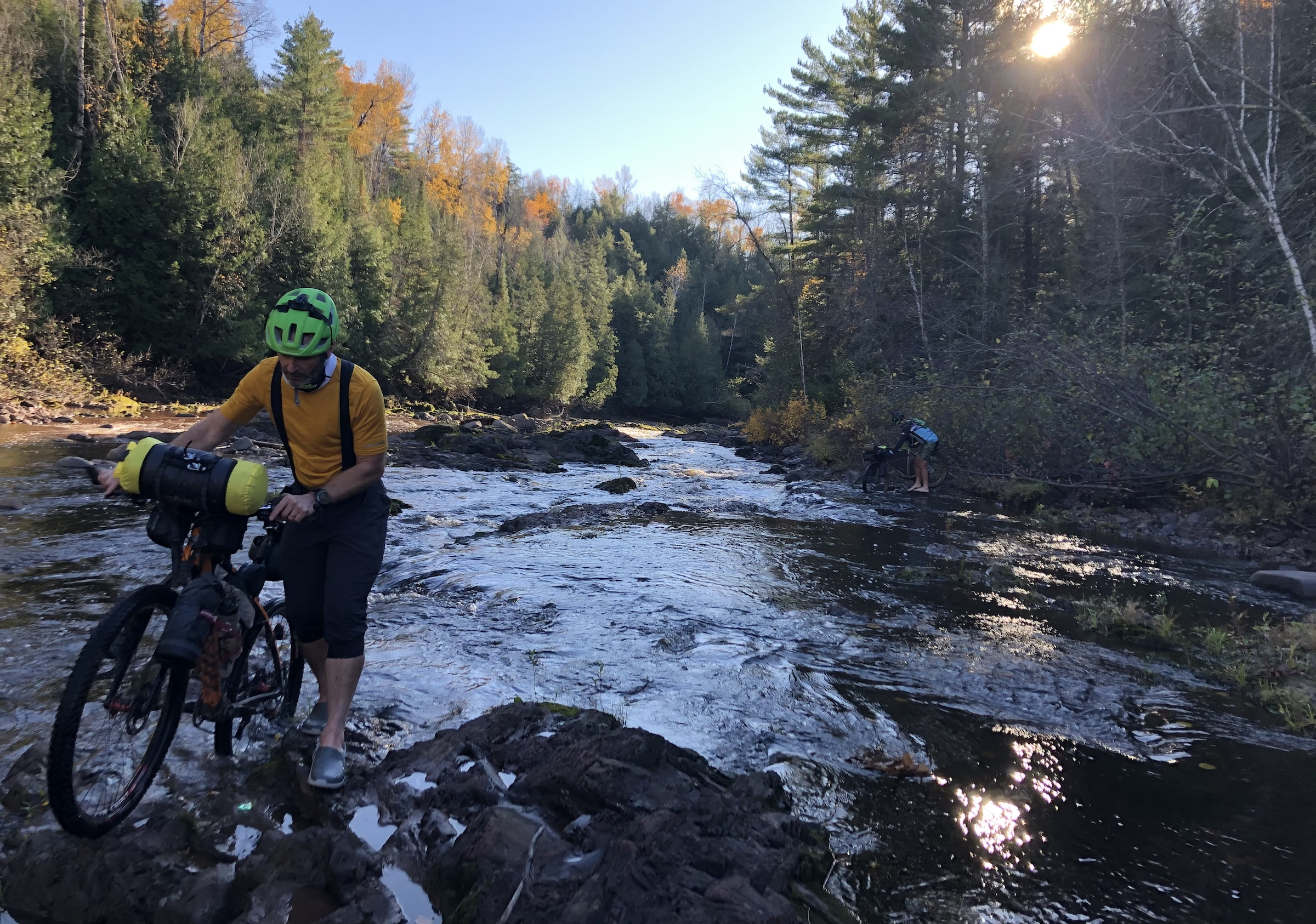 A route of this magnitude created obstacles, but that’s what made the adventure — and challenge — so rewarding. “When you factor in the weather we experienced and special features like hundreds of miles of sand (literally hundreds, at times off your bike pushing it for miles), it is incredible to think we got it done in 10 days.”

There were multiple hike-a-bike moments through deep ravines, route-finding and cycling in the dark of night, a Montreal River crossing on the northern tip of the Keweenaw, and so many more memories for the duo that were inextricably linked to this specific and special place.

The duo rode 116 miles on the first day and 114 on the second. So there were definitely long days in the saddle. “140-mile days were common. I hope this story inspires and encourages people to #beadventrus, and challenge themselves,” Poquette wrote.

Here’s a condensed list of the gear the team used to make the Michigan Upper Peninsula bike adventure possible:

When he’s not adventuring and crushing insane mileage goals, Todd Poquette serves as Director of Adventure for the 906 Adventure Team, a 501(c)3 nonprofit. (He’s also the co-founder of the Upper Peninsula’s brutally difficult Marji Gesick Bike Race.) As an organization, their mission is to empower people to discover the best version of themselves through outdoor adventure. Due to COVID-19, their organization couldn’t run events this year.

“With [the onset of COVID-19] canceling literally everything, I felt it was on us (an adventure team) to step outside the box and adapt to the circumstances. We turned our usual Crusher event into a self-supported event anyone could do between July 1 and October 1,” explained Poquette.

Then he started thinking, What’s next? What can we do to bring people together? Like for many of us, getting outside was the answer. That’s when Project Adventrus was born.

There was no real plan: just some gear, some friends, a route that had never been done, and 10 days to do it.

As the lines blur between road, gravel, and adventure cycling, Thesis carves its own path. We rode the Thesis OB1 bike on singletrack, trail, and tarmac. Read more…