Paddling phenom Dane Jackson set a new Green Race course record of 4:04, just missing out on cracking the 4-minute barrier. We got to chat with Jackson after his big win and get some insights on how he prepared, how the race went, and what the future holds.

On the first Saturday of every November, whitewater creek racers from around the globe converge on the Green River Narrows in western North Carolina. This year marks the 24th running of the Green Race. A massive field of 145 paddlers stepped up to take on this intimidating steep Class V whitewater racecourse this year.

Dane Jackson continued his domination of all whitewater kayaking competitions at this year’s Green Race. Jackson is only 26 years old and arguably the best, most versatile whitewater kayaker in the world right now. He’s part of the Jackson Kayak family dynasty and sponsored by such big names as Red Bull and GoPro.

“This is my 10th year competing in the race, and I always look forward to it. It’s one of my favorite days of the year,” Jackson said.

In his 10th Green Race appearance, Jackson took the overall title for the second year in a row. In the process, he laid down the fastest time down the course in history.

His time of 4 minutes 4.4 seconds was one second faster than the course record he set last year. Not only that, but he also set a new short boat record of 4:24. 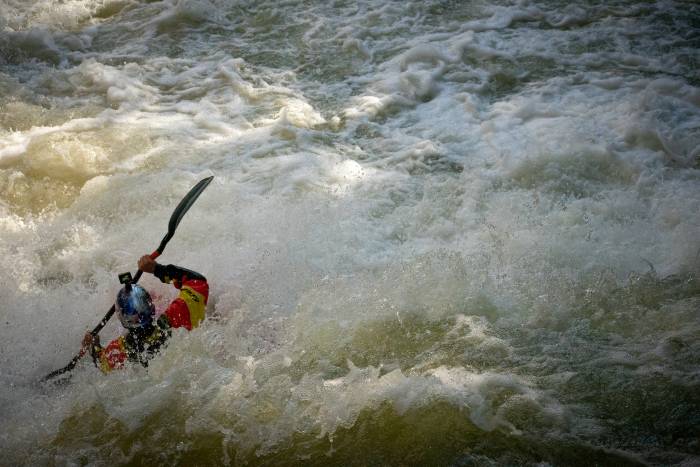 Jackson’s performance was so dominating that he beat the second-place overall finisher by a full 8 seconds and the third-place finisher by a massive 16 seconds. His short-boat time not only gave him the short-boat win and set a new course record, but it was also good enough for 10th place overall.

How Dane Jackson Prepares to Race

Jackson took the Green Race super seriously this year, aiming to crack the elusive 4-minute barrier. Besides many top-to-bottom practice laps on the racecourse, at a wide range of water levels, he also analyzed tons of video footage.

For a month-and-a-half, he watched GoPro footage from previous races and practice laps. He analyzed every segment of the racecourse to optimize his lines. He even broke the course down into segments and took notes in a spreadsheet form to really digest the data he was collecting.

The fastest practice lap Jackson had recorded this year was a 4:06, so he was extremely happy with his race-day performance at 4:04.

Jackson decided to try a lighter boat this year to help him chase that sub-4-minute time. He paddled a Jackson Karma Unlimited, an 11’10” racing creek boat, which he had custom made in a lightweight layup. Between about 4.5 pounds less plastic in the boat and removing some weight in the outfitting, he was able to lighten the boat by about 6.5 pounds.

Less weight in the boat made it easier to correct, turn, maneuver, float just a bit higher in the water, and keep the bow on the surface. All of this combined added just a touch more performance to an already race-proven design. 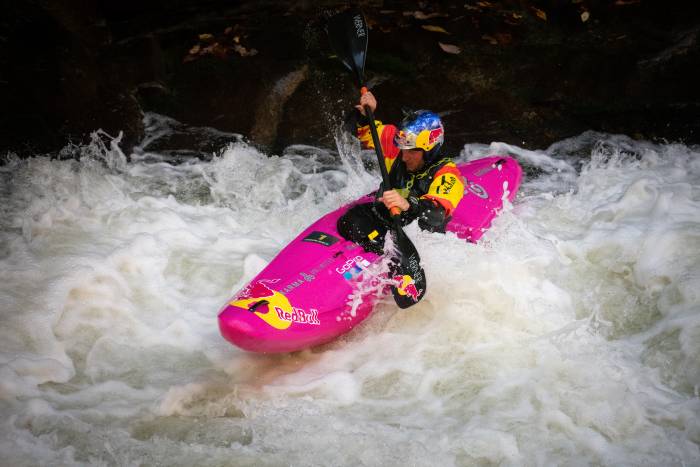 I asked Jackson about the possibility of using carbon or other lightweight-material boats. He was skeptical and planning to stay with plastic on the demanding course for the foreseeable future.

Jackson said, “I don’t think I’d go composite or anything like that — just too high a risk.” He likes the stiffness and low weight of composite kayaks but worried about messing up, breaking the boat, and putting himself in danger on the river.

He said a perfect run is way more important than boat materials. He’ll consider switching to different boat construction only after he puts down the perfect race run.

The overall winner from the previous year always gets to be first off the start line the following year, at high noon. Jackson paddled both long and short boats, which meant he had to make two laps of the course and deal with all the logistics of that endeavor. As first off the line, he had the time to make it happen and recover a bit between laps.

Water level is super important for any whitewater race. The levels fluctuated wildly during practice in the few weeks leading up to the race. On race day, there were a healthy 11-plus inches of water on the gauge.

“The water level was a rare in-between level, not too high, not too low,” Dane said when describing the day’s river conditions. “That level gave me the potential to have the fastest time, but also made the moves harder for the long kayaks, especially in the second half of the course. When I got to the bottom, I knew I didn’t quite reach my goal of a sub-4-minute time but was stoked to have a run without any major mistakes.”

Jackson reckoned it was “one of the hardest levels to put together a top-to-bottom clean run.” The moves on the big rapids were a bit harder than at lower levels, but water flowed faster on the less steep upper section.

With that said, it was also his dream level. It meant that if he ran it perfectly, he’d set a record. He also said that a slightly lower flow might even make for a faster time. That’s because it would be easier to put together a perfect top-to-bottom lap.

The other option for recording a sub-4-minute time would be for the river to be over 18 inches. The incredibly high water level would make for a super-challenging course but offer up really fast-flowing water.

The day before this year’s race, the water peaked around 19 inches. At that level, Jackson recorded a practice lap in his longboat of 3:50, even with a few big mistakes on the course. He figures a 3:40 is possible on this course with a similar level, perfect lines, and hard paddling.

Can a Kayaker Crack 4 Minutes?

Besides the high water option, Jackson also thinks that at normal flows, like 9.5 inches or so, a sub-4-minute time is completely possible. Although he didn’t make any big mistakes this year, he didn’t have a perfect run.

The energy of the crowd in the gorge, numbering in the hundreds, especially at the big rapid known as “Gorilla,” fuels racers to go hard on the extremely steep bottom half of the course. No other whitewater race offers this level of up-close-and-personal paddling experience with such a huge crowd.

The steep Class V whitewater and hundreds of diehard fans that hike out to the race make it a special experience for Jackson and all who compete. The race is all about bragging rights and competing against world-class paddlers on a world-class racecourse.

Will the 4-minute barrier be broken soon? Only time will tell. But Jackson and other top racers are working hard every year to find those minute changes that will give them the mental, physical, and gear edge to make it happen.