The sport of surfing is preparing for the Olympic Games in 2020. And new technology has top surfers headed to the Texas desert to train. We traveled to Texas to learn more.

Rolling out to the Barefoot Ski Ranch and Surf Resort after a 90-minute drive from Austin, I’m beginning to wonder how in the hell there could be a world-class surf wave in the middle of Texas.

Past a few more farms and fields, a large but discrete gate appears. We bang a hard left down a gravel road into what at first appears more like a backwoods waterpark than a first-rate surf facility. But it quickly proved me wrong.

We crossed over the “longest lazy river in the world” and into a sprawling manmade pool system pumping out waves that made even a landlubber like me drool. The Barefoot Ski Ranch (BSR) is, according to elite surfers and locals alike, the only place like it in the world: a “surfer’s paradise.” 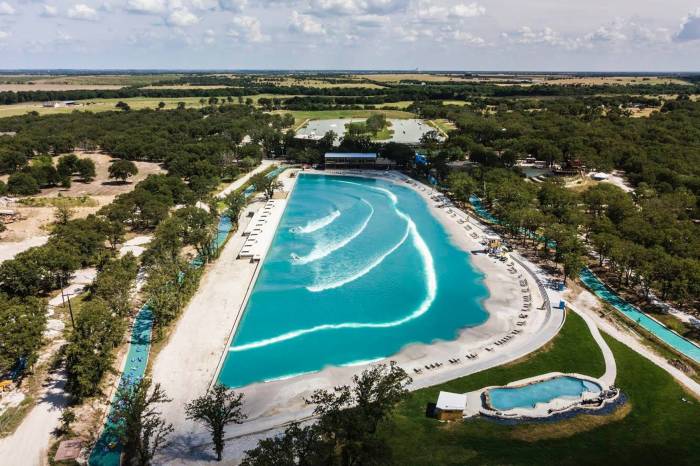 BSR’s wave pool is a “field of dreams” for surfers. Capable of creating consistent, near-perfect, head-high waves at a rate of 150 per hour, it gives surfers something the ocean rarely provides — repeatable consistency. Every wave is nearly the same, allowing one 8- to 10-second ride after another, where surfers can dial tricks and train like never before. The pool is so impressive, in fact, that the U.S. Olympic surf team selected it as its official training facility in preparation for the 2020 Games in Tokyo.

Powered by American Wave Machines’ (AWM) PerfectSwell surf technology, there’s no other place — including the coasts — that produces the sheer amount of consistent waves that BSR does. The only other manmade surf spot in the U.S. that comes close is the Kelly Slater Surf Ranch in Lemoore, Calif., which uses its own technology, The Kelly Slater Wave Company. But that’s not open to the public. BSR is.

But forget the general public; we had the whole facility to ourselves for the weekend. I’m here as a guest of event sponsor GMC to see the second annual Stab High Aerial Surf Competition, a new breed of surfing comp judged on aerials alone.

Now in its second year, more than two dozen of surfing’s premier aerialists — pro surfers like Chippa Wilson, Noa Deane, and Albee Layer — traveled from California, Australia, and other global surfing hotspots for this weekend, literally out in the middle of the country. They mixed it up with locals and regional surfing fans who made it to the party.

The bottom line is that these surf parks are changing the sport in an unprecedented way. They allow progression and access similar to what progressive terrain parks did for snowboarding. But what we’re seeing is also akin to what skate parks did for kids everywhere.

Or, perhaps even more so, what pool and foam pit training did for Olympic aerials.

Surf Training: All About Consistency

“From an everyday surfer’s perspective, we want to surf as often as we can and for as much time as we can. The wave pools not only allow consistency, but they are more reliable than Mother Nature most times,” said pro surfer Kevin Schulz, who is a contender for the 2020 Olympic team.

He also took home the Freak Peak award at the weekend’s comps, pulling an aerial move he had never done before his first time out on the manmade wave. It’s stuff like this that’s blowing these guys’ minds, and all for the betterment of the sport.

Just hours after his first time in a legitimate wave pool, Schulz said he’s a huge fan of the pool movement.

“I was landing tricks I had never even tried in the ocean,” he said. “I kept trying to wrap my head around surfing in the middle of Texas, while people were seated in stadium fashion, watching on while they were drinking beers from the bar. Surfing needs this kind of personality so people can have something to relate to, similar to the NFL or NBA.”

Even the new Olympic Surfing logo is an image of someone doing an aerial, for those looking for further proof of the sport’s direction.

But given surfing’s inherent connection with the sea, are surfers ready for a seismic shift in the sport that could bring it thousands of miles inland?

When I scoured the scene, I found that Waco locals absolutely love the place. Recreational athletes are driving from Dallas and Austin every week to partake in the world-class six-tower cable park, water slides, lazy river, and the surfing facility every weekend now. They’re employing many, giving people a place to cool off and party, and infusing the entire region with surf culture.

And that’s what draws the most elite surfers in the world to these facilities. 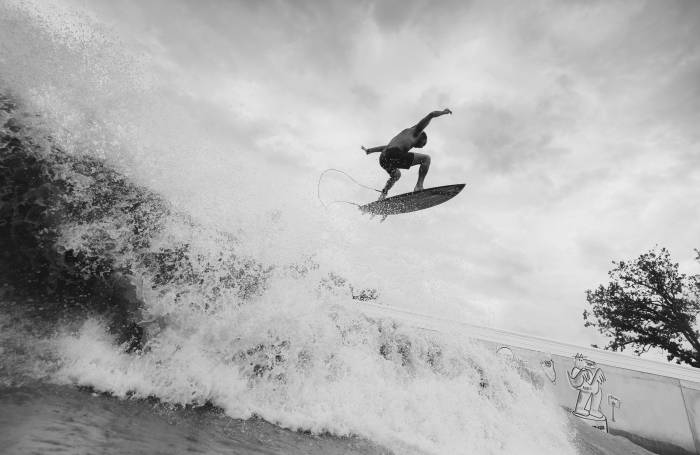 “It’s complementary to all the stuff happening in the ocean,” explained Stab Magazine’s Aaron Carrera. “We would never move away from the ocean.”

But, Carrera noted, the pools allow Stab and other sponsors to put on events that have never been done before.

“You’re always going to have people that are critical of any sort of progression, even if we were doing an air show in the ocean,” he told me. “We’re gonna see people doing stuff that we didn’t think was possible 5 years ago because there is this level of technology out there. It’s making it so anyone can go and experience surfing who wouldn’t otherwise be able to at a landlocked area. It’s completely changing the way people view surf.”

But given the park’s obvious energy and water use, some surfers question if this is a good use of resources. “American Wave Machines sought efficiency first in the use of power,” explained Willy McFarland, the brand’s business development manager and son of its founder.

Based in the Silicon Valley of surf, Solana Beach, California, McFarland outlined some pretty impressive claims about the technology’s environmental impact — or lack thereof. According to him, the BSR surf facility uses less water to fill and maintain than a large golf course pours down the drain in less than a week. And because the whole electric system can be powered by renewable energy, there’s no burning of fuel or emission. This way, the carbon footprint of flying and driving to the venue ends up being much larger than that of the pool itself.

McFarland explained, “Using our patented digital controls, we’ve identified the times when peak power is required for a wave. When it’s not required, which is most of the time, we can store the energy or use less.”

The scalable AWM technology also allows for smaller pools than were previously possible, such as at the neighboring NLand Surf Park in Austin that is now out of business. After the initial fill of about 500,000 to several million gallons, only evaporated water is replaced and the rest is constantly filtered. The evaporation loss is equivalent to less than 5 percent of what a golf course uses in one day, according to McFarland.

Could Wave Parks Grow the Sport of Surfing?

While the pools do require both energy and water to run, many surfers think it’s worth the sacrifice to bring the sport to new enthusiasts.

“The pools are bringing surfing to landlocked areas and encouraging more and more people to be involved in a really unique culture. I think wave pools are the key to our sport flourishing in the future,” Schulz said.

AWM technology has no moving parts in the water and doesn’t require visible concrete sidewalls. So BSR is able to crank out a large variety of waves to accommodate any level of surfer, as well as both right- and left-breaking waves.

“When creating the surf, we always have on eye on the ocean, particularly on weird waves, and examining the ways in which energy interacts to create them,” McFarland said, using the Stab High Freak Peak contest as an example. “After seeing a video of a pro land a pretty insane air using a backwash peak, we set out to find that in the pool. We didn’t really have any expectations and we could never predict what happened next.”

With only a couple of initial repetitions his first time in the water, Schulz did this:

During today’s @stab_high practice session, @kevin_schulz landed what some are calling the biggest air in Waco’s brief history. Fair claim? (We think so.) Tomorrow’s main event will take place on the “standard” air section, but the Freak Peak (pictured here) has its own subdivision, where each surfer has a single chance to land the most fucked up air—the winner of which takes home $10k. Suffice to say, this effort would have rained 9s and 10s from the judges. Video: @kyleflath @vanssurf | @monsterenergy

“Surfers are incredibly adaptable when given repetition. We take a lot of feedback from pros and amateurs alike and are always looking expand the arsenal of surf,” McFarland told me. “It has been really fun to watch.”

Up Next: National Hammock Day: Save Up to 60%

Saving…
National Hammock Day: Save Up to 60%
You Can Rent Jimmy Chin’s Adventure Van This Summer
×