Electricity is so interwoven into our daily lives that we take it for granted — that is, until the next ice storm knocks out your power, or you can’t attend that Zoom meeting because your laptop is out of juice.

I often take my work on the road and so exactly 4 years ago, I found myself looking for a way to be powered for longer. My solution was to assemble a portable secondary lithium pack — and it’s a solution that is now more approachable than ever. Here’s how I did it.

Lithium can save you money in the long run. A Dakota 100Ah lithium battery will cost you about $900, whereas an entry-level 100Ah lead battery only costs $250. However, you can only discharge a lead battery to 50% or it will die prematurely. That means you need two 100Ah lead batteries for the same useable energy.

Next, you have to look at lifespan. A typical lead battery will last at most 500 cycles, while a lithium battery will last at least 2,000. You’d need to replace your lead battery four times as often. The equivalent utility you get from lithium would cost 2 x $250 x 4 replacements = $2,000 in lead cells! Do the math — lithium is less than half the price of lead in the long run.

There are also some lead AGM batteries that can last 1,000 cycles, but you’ll pay more accordingly.

Adding to the value proposition, lithium is smaller and lighter. In a van camper, every cubic inch is important. Lithium is 60% lighter than comparable lead batteries and 20% smaller.

Lithium can be charged faster and is much more shelf-stable — you don’t need to keep it on a tender. Lithium also performs better in warm weather than lead.

Why Not Go Lithium?

Cold temperatures can reduce the usable capacity of lithium cells, and they can’t be changed below 32 degrees. For that reason, most lithium cells should be placed inside the vehicle while lead batteries can be housed elsewhere in the vehicle chassis.

Note that if you have flooded lead cells, you should not install them in your vehicle, as they can emit dangerous hydrogen gas when overcharged.

You’ll want a special charger when using lithium in a vehicle, one that uses an isolated DC-DC converter. These can be slightly more expensive than the isolators used with AGM cells, but they’ll maintain a better charge and store more energy even on an AGM battery. The Victron 18A isolator we used is about $117.

Lithium cells are notoriously temperamental and require special charge and discharge circuitry. The Chevy Bolt battery fire debacle is a prime example of this. Those packs use lithium-ion cells made by LG.

For a secondary power system, you can choose the safer lithium iron phosphate (LiFePO4) cells which, while slightly heavier, are far less likely to catch fire. Lithium iron cells still need safety circuitry and charge protection, so it’s important to purchase them from a reliable manufacturer.

I stumbled upon Dakota Lithium at the Outdoor Retailer show back in 2017. Dakota was founded in the Pacific NW in 2008 and now offers an industry-leading 11-year warranty. As an EV systems engineer, I’ve built plenty of packs myself. It’s not rocket science, but there are plenty of ways to do it wrong.

So, I happily handed over $600 for 60Ah of lithium cells (the prices have dropped dramatically since then). I fashioned a rugged case for my cells and have since taken my Dakota pack on many extended camping trips and on-site customer visits. And I’ve even powered my refrigerator during an ice storm. It’s been a workhorse of a pack and so far doesn’t show any signs of degradation.

This summer’s adventuring included #vanlife ownership and rental — read all about it. The van’s electrical system was miswired and overdue for an overhaul. Dakota Lithium stepped up to help with its newest and biggest pack to date — a 200Ah lithium pack to replace the aging 75Ah AGM that came in the van. That’s five times the energy!

My energy appetite may have been bigger than my van’s stomach. Even though it’s denser, the Dakota Lithium 200Ah pack is mega! There’s no way it would fit in the same spot as the old 75Ah lead battery.

One other overlooked upside to lithium is that you can install it in any orientation. Even sealed lead batteries must be installed flat with the terminals on top. Because of this feature of lithium, I was able to shoehorn the 200Ah pack into a rear cabinet.

While I’m giving up storage space, this actually cleaned up the wiring really nicely. I am no longer forced to route long battery leads across the chassis. In my van, this frees up storage behind the seats, where I can now install bike fork mounts in the old battery tray for interior bike transport.

Dakota partners with Victron for their DC-DC, solar, and display accessories. I knew I wanted a smart display to give my van renters peace of mind.

The Victron BMV-712 smart battery monitor was an easy choice, as I’d used one previously on a solar boat project. At just over $200, it doesn’t come cheap, but it offers a great suite of features that includes a Bluetooth-connected app. I can watch in real time the estimated hours of battery remaining when I turn on the refrigerator or plug in my PC to charge.

The DC-DC converter was very easy to wire and replaced my isolator relay. I also wired in the 120V charger, which will charge the pack when I have the van plugged in at camp. While my existing lead 12V charger would work, the provided lithium charger can safely charge to a higher voltage — which means more energy.

For most builds, lithium can be a drop-in replacement. Dakota, Battle Born, and other suppliers smartly size their batteries to fit in existing lead battery form factors.

I went a bit overboard — even with all lights, fans, refrigerator, and laptop charging, I can park for nearly a week without recharging. While I could use a smaller pack, one upside is that I can ditch solar completely. I don’t need to worry about getting enough sun exposure, and I don’t have to clutter my roof with silicone cells (which means more room for toys).

If I were to do it again, I’d start with one 100Ah battery and add more as needed. 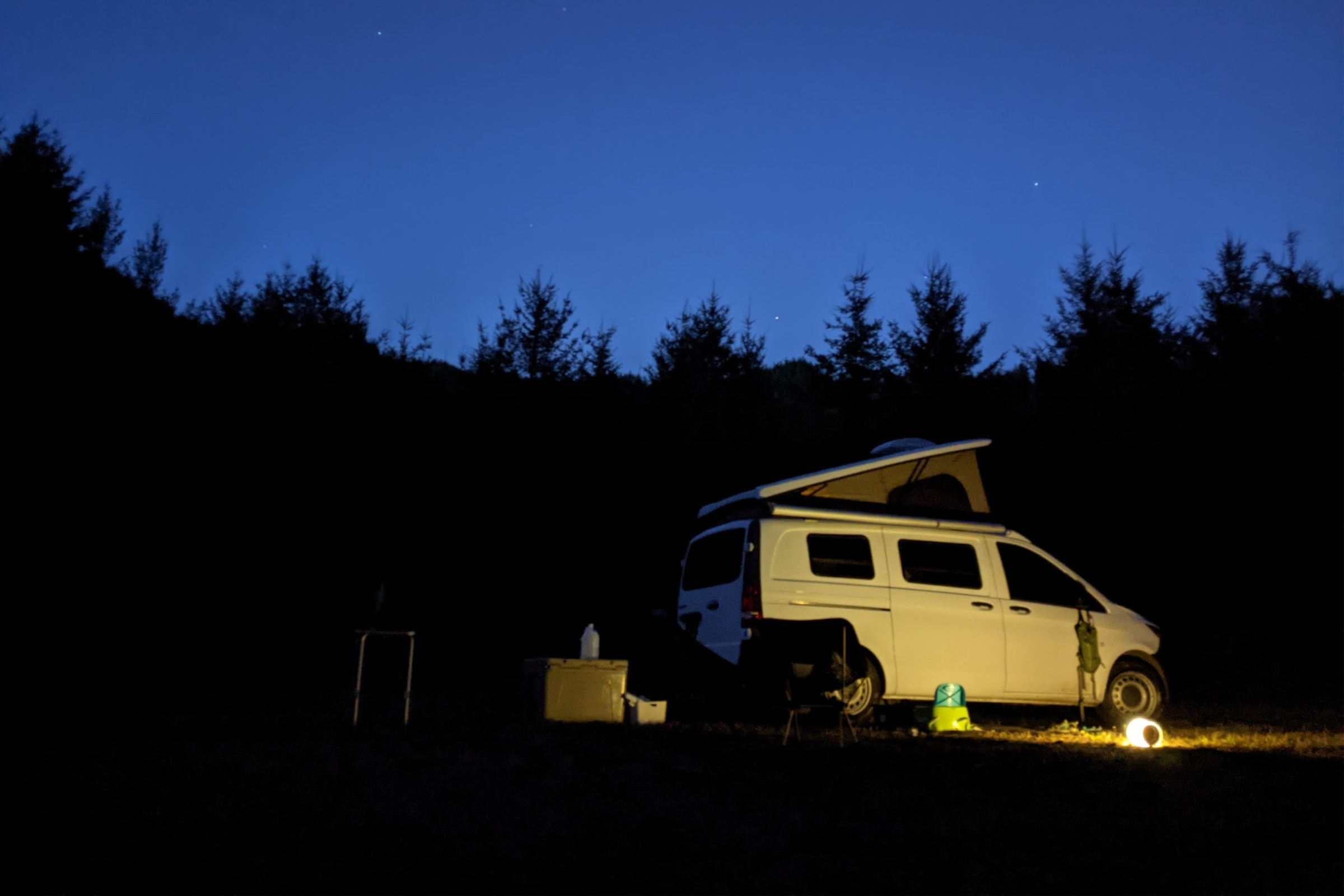 With this much energy, I’m reconsidering how many fuel sources I need in my rig. My van is equipped with a propane stove, and it’s a bit fussy to fill the tiny tank every month and deal with open flames in a vehicle. It’s feasible to run a power inverter and an induction cooktop and never worry about gas again.

This winter, I have plans to mount up snow tires and camp out at Mt. Hood for ski trips. I had been contemplating getting a propane heating system installed, but I recently discovered how comfy you can be with a simple 12V heated mattress pad and heated blanket. Conductive heat is much more efficient than convective (heating the air) and I can run them all night.

The more energy you have, the more options you have — and the further you can roam. While the upfront cost is still high, the recent drop in prices almost makes lithium a no-brainer. Whichever brand you choose, make sure they have a strong track record and warranty behind their products.

Up Next: Polaris Introduces the World’s Most Powerful Stock Side-by-Side