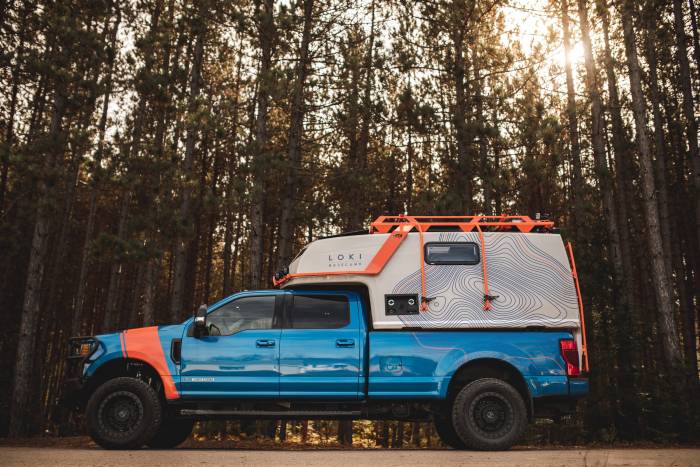 We tested out the Loki Icarus, an all-season composite truck camper with a modern aesthetic and thoughtful minimalist amenities.

First announced in fall 2021, the Icarus is Loki’s second camper design. It’s smaller and lighter than the Basecamp Falcon. And, like the Falcon, the Loki is designed for year-round, off-grid use.

There were two things that impressed me most about the Loki Icarus. First was the clever solutions to camper living, amenities that solve off-grid problems, and the added convenience to camper living that I never anticipated I could have. And, the camper’s ability to withstand the weather.

I tested this camper over two weekends in the Vermont woods, using it as a base camp for bike adventures on frosty fall days, and to power tools at an off-grid camp that I was helping renovate.

I hope to have the chance to test it again on a ski trip. Not many campers can truly handle the cold, but this one claims it can.

Until recently, I owned an F-350 with a Hallmark K2 camper, and I’ve also tested Loki’s Basecamp Falcon on an F-350. Driving through corners, or bouncing along Class 4 roads, both campers changed the handling of the vehicle. With the Icarus on an F-350, I sometimes forgot I had the camper on my truck.

Before Loki actually produced the Icarus, its goal was to build a fully featured but compact camper for smaller trucks. Now that the Icarus is in production, Loki advises that you put the Icarus on an F-250 or larger truck.

It’s TBD whether this camper is compatible with an electric drivetrain truck, which was also one of Loki’s original goals. The camper is heavier than originally anticipated, and the payload on various EV pickups is not clearly defined.

Loki is testing this camper on a Rivian. Ford has advised customers not to put any camper into the bed of the Ford Lightning.

Because storage space inside is limited, Loki now offers its own storage-enhancing flatbed system compatible with F-250- and F-350-size trucks. But you can also run the truck on the Super Duty or comparable truck you already own.

Some campers feel confining. This one does not. With the doors open, I could watch the sunset from behind a magnetic zippered bug netting door that kept critters out without blocking airflow or the view. I could step outside to shower or cook with the van kitchen within reach. I could also hang out on the rear threshold.

Oversized windows and a roof hatch have both bug screens and blackout screens, which let lots of light into the camper and also blocked it out when you want to sleep. The roof hatch gave me access to solar panels, a roof rack, and more, but as configured, there wasn’t space to chill as there was on the Basecamp Falcon.

The Icarus has the most dialed systems and modern conveniences of any camper I’ve tested. Gray and freshwater systems won’t freeze in winter when the camper heat is on, as they’re fully contained inside the insulated vehicle. With the camper plugged into shore power, tank heaters prevent freezing even in sub-zero temps.

I was able to control all indoor and outdoor lights, radiant floor heating, outlets, cellphone booster antenna, and hot water through the Redarc RedVision system app from my phone. It took seconds to turn anything in the camper on and off. The convenience was impressive.

“The Falcon series campers are big, and they’re expensive,” said Marc-André Paillé, Loki’s Director of Marketing and Customer Experience. “We designed and built the composite Icarus to be a more compact camper for people who want to overland, or who want just to enjoy being outdoors with some of the comforts of home.”

For a solo traveler or a couple, it’s ample space. For a couple who tends to bring gear for too many sports for any weekend away and three 50-70-pound dogs, it was somewhat cramped.

While there was limited storage space for personal gear, there was ample room for everything I needed for cooking and eating, including a convection burner, a toaster, pots and pans, and more.

My personal gear lived in a duffel bag I hooked above the single seat next to the sink. When I wanted to use the seat, I chucked the bag on the bed.

Loki crams conveniences into the Icarus that are awesome. At the back door, the camper had a push-button-activated air compressor. During my review, I used it to inflate both my bike tires and a paddleboard. Of course, it can also be used to inflate truck tires after you’ve aired them down.

Also by the back door — a spigot with hot water, and a mesh door panel to store a shower attachment. Loki also included a shower pod with the camper I tested for days when I wanted to shower inside without getting the camper soaked. An outlet at the base of the back door was also perfectly positioned for outdoor cooking on the convection burner.

I’ve owned and tested many campers that claim off-road readiness, but then have cabinets that swing open when I’m driving on washboard or components that break when the going gets rough. Loki’s campers, both the Falcon and the Icarus, are the most robust campers I’ve used.

The difference is in the details. Locking latches on the cupboards closed with a solid click and didn’t bounce open even on the roughest roads. A drawer-style fridge with a small freezer held enough food and drink for several days for two people, and it stayed shut without an auxiliary lock.

Loki spec’d a Max fan that kept the rain out but let air in. The windows even latched open in multiple positions, so you can dial in the airflow to your tastes and changing weather conditions.

This camper is for people who want to be self-sufficient, and who don’t plan to plug in. The air conditioning runs off solar — in every other camper I’ve tested, it had to be plugged into shore power.

Hot water and radiant floor heating are powered by diesel from the truck’s tank or from a 30L reserve tank, depending on how you spec the camper. The camper holds 15 gallons of fresh water and 13 gallons of gray water.

A swiveling wood table raises and lowers. I could use it sitting on the couch, or from the kitchen seat for eating, working, and playing cards. Every Icarus is custom outfitted, so buyers can work with Loki to come up with the perfect configuration.

The Icarus I tested had tracks throughout. The kitchen seat in the camper I tested was attached to those tracks, so I could move it around. On nice days, I moved it to a track low on the van door. And with the camper open, it became a table for outdoor cooking as well as a tool bench.

Despite the extremely compact space, the Icarus felt like it had a lot of counter space for meal prep and storage. A cover folded over the spacious sink to convert it to counter space. I could still use the built-in and separate UV water purifier faucet with the sink closed to fill my water bottle.

I currently own an Airstream with a solar system I haven’t gotten around to upgrading yet. It was refreshing to be in a rig with 270 watts of solar and 600 mAh of battery storage. Even after several overcast days, I didn’t worry that the camper would run out of juice.

And the power delivery was robust — enough to run a high-draw air compressor and a table saw on a sunny day while helping a friend renovate an off-grid cabin.

I tested Loki’s very first Icarus Series camper, which has been improved for customer builds. The bed was claustrophobic, but Loki has fixed that issue.

The new over-cab bed has gained 3 inches of headroom and the bed is a foot longer. It will now fit taller campers and will sleep two people better than before.

The bed I tested was on a slide that was hard to operate solo. Since its first Icarus build, Loki redesigned the slide and made the bed a foot longer. Taller users can still spec a slide, but it should work much better.

I was fine for a couple of nights at a time on the 1.5-inch thick foam mattress full-size bed, but it was hardly luxurious. If spec’ing this camper for my own use, I’d likely opt for a thicker mattress.

The standard Icarus Series camper has around 5’9″ of standing height, with an available Max edition offering up to 6’4″ to stand up in.

I used the radiant floor heating to take the chill off during cool and clear Vermont fall nights. A diesel-powered heater keeps the camper warm in winter even if you’re holed up inside waiting out a snowstorm at the base of your favorite ski area.

Made for Weekends, but Flexible Enough for Long Trips

There aren’t a lot of changes I’d make if I owned this camper. I would likely opt for Loki’s 3-inch thick mattress, though. As a cyclist, I’d add a bike stand to the camper’s side rails. And, I’d ask Loki to install fork mounts inside the camper so I could have bikes inside on longer drives.

When I had the camper, I mounted Yakima’s EXO rack on the back with two storage boxes, and on a different occasion with one storage box and a two-bike-rack setup. This setup increased my storage adequately.

The space was lovely to be in, and for a solo traveler or a minimalist couple, I can’t think of a better truck camper. I loved this camper for its modern aesthetic and streamlined systems. Every unit is custom-built to suit the owner’s tastes and preferences and is pretty configurable.

Loki is positioning the Icarus for weekend warriors, mostly because of the limited storage. If you embrace the tiny house aesthetic and are comfortable with a stripped-down packing list, there’s no reason you couldn’t use this camper for longer trips or live out of it for the long haul. This is especially true if it’s mounted on the back of a crew-cab pickup with storage room in the back seats of the cab.

“The Icarus is smaller, but everything is there,” said Paille. “We continue to evolve it to be the most innovative camper and a true adventure vehicle.” 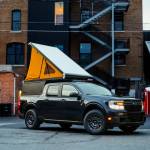