Home » Camper & RV » The Future of Van Life Is Here. And It’s Electric!

Van-based travel has been accelerating the past few years — and the pandemic lit full afterburners on the well-established van life movement. But this mobile-living diehard says he’s discovered what’s next.

When your parents start talking about buying an empty van and building it out, you know the bubble has peaked. And with COVID fears reaching every corner of America, virtually everyone wants a private hotel room on wheels.

So, what’s next for the van life industry? Electric vans. That’s right, lithium-ion units and battery packs are taking the place of fuel tanks and emissions — the van life trend is making a pretty big shift. And the industry’s biggest companies are leading the charge.

So we caught a look at what’s next for electric vans in the U.S. 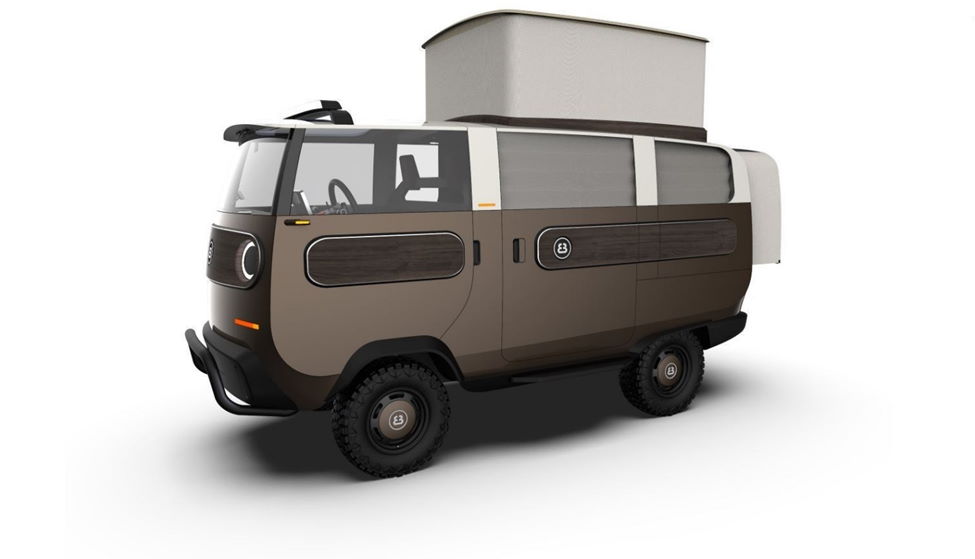 If you couldn’t guess from that list, electric vans debuted in Europe first. Currently, you can’t actually walk into a U.S. dealership and buy one — yet. But trust us, the concept is sound.

The electric evolution is driven by economics as much as it is by environmental concerns. Commercial sales, which account for a majority of van sales, are all about return on investment. Businesses looking to save on fuel see electric’s quick recoup on stop-and-go delivery in cities.

And Europe’s density and strict emissions have accelerated the adoption overseas. 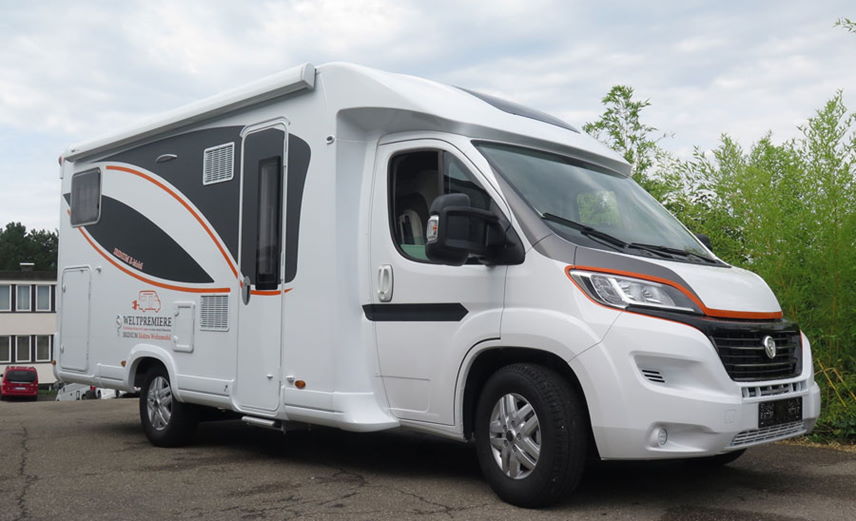 Accordingly, the first electric RV on the market is a German model from Iridium. This class B RV has a 249-mile range and is built on a Fiat Ducato (Americans know it as the RAM ProMaster) chassis for a cool $175,000.

If that looks a bit large for your garage, a few outfitters have taken Nissan’s e-NV200 compact van and made it into a micro-campervan for two. 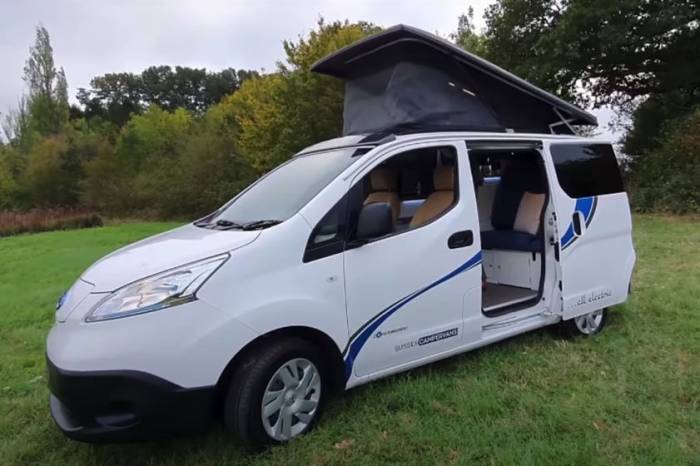 This one, shown above from Sussex Campervans, has a starting price north of $78,000. From the factory, the leaf-based e-NV200 has a range of only 124 miles. When you add in all the weight of a full camper build, you’re going to lose that real quick, especially at highway speeds.

The A-Team Van Is Up for Auction, and 2021 Is Already Better Than This Dumpster Fire Year

We pity the fool who doesn't understand how awesome this is. Read more…

It’s crazy, but I’ve owned and driven electric vehicles (cars and bikes) for the past decade. And I’ve learned more than a few things along the way.

If you’re out to save the planet, electrified van life probably won’t make the difference you’re hoping for. It’s true that your tailpipe emissions are zero, but you need to also consider the full lifecycle cost of the batteries and electric drivetrain. Really, it all depends on how (and how far) you drive.

The science is clear: Electric cars are better for the environment, even if you charge them from coal power. But cars and RVs are different use cases. The average RV moves just 4,500 miles per year. At that rate, the energy and materials put into making the battery pack won’t be offset before the batteries degrade with age. At that low mileage, it will also make it near impossible to recoup the cost of fuel you save by going electric.

On the other hand, if your campervan doubles as a second vehicle, it could be a climate win. Combustion engines pollute the most during the first few minutes of warmup. Replacing small trips with your electric van could pay off. If you live full-time on the road, you might also rack up enough miles and fuel savings for the numbers to work out.

The obvious roadblock for electric van life, range is quickly impacted by the addition of weight and accessories like awnings, racks, and toys. Most of the things that add to the camping experience are going to decrease your autonomy and have you stopping at every charger you can find.

Hearing “Are we charged yet?” while sitting in a sweltering parking lot is not the way to spend your hard-earned vacation days.

Range anxiety is real. As an early EV adopter, I’ve found myself in trouble when the weather turned cold, a road was closed, or a charger was out of service. You do not want to find yourself stuck on Thanksgiving in your van in a snowstorm with your in-laws in the back (speaking from experience).

But the good news is that technology moves quickly, and batteries are getting better every year. Sooner than you think, an e-van may start to make sense. For the U.S. market, I expect the first conversions to be rated for 200-plus miles (at which point your kid will need a bathroom break anyway!).

Solar is also improving, but even the biggest array that can fit on your van would only trickle a big EV battery pack. 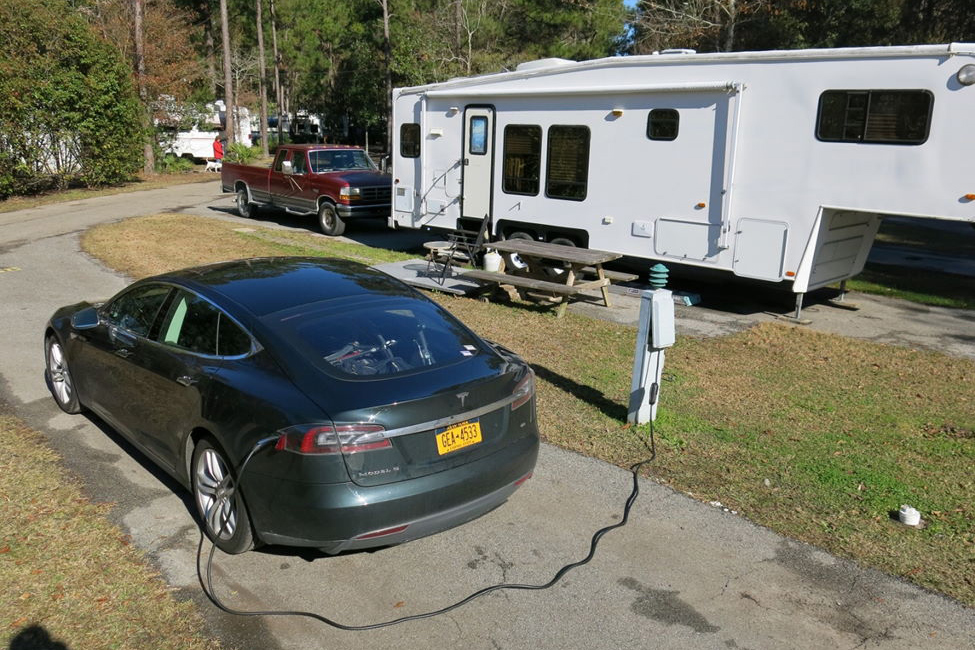 Another plus to combat range anxiety: Most RV parks are already wired with 240V power. So charging up quickly at camp is more feasible than you might think. (And several gas station chains are making the switch too.)

It makes a lot of sense to travel with a massive energy bank, as most van life builds include the addition of battery banks anyway. The batteries on one of these electric vans could power your remote office on wheels for a month if you stay put. You no longer need a separate “house battery” when you can tap into your EV’s battery for all your electronics charging needs.

Other synergies play to the e-van advantage. Electric vehicle climate control runs off your battery directly and can be used with the vehicle powered off. So you might not need a separate AC or heating system.

Tesla actually has a “Camp Mode” that allows you to run climate control all night if you want to sleep in your model X. We can’t wait to see what camper tricks await us with the arrival of the Cybertruck, as you know Musk won’t let companies like Rivian steal all the overland electric truck press. 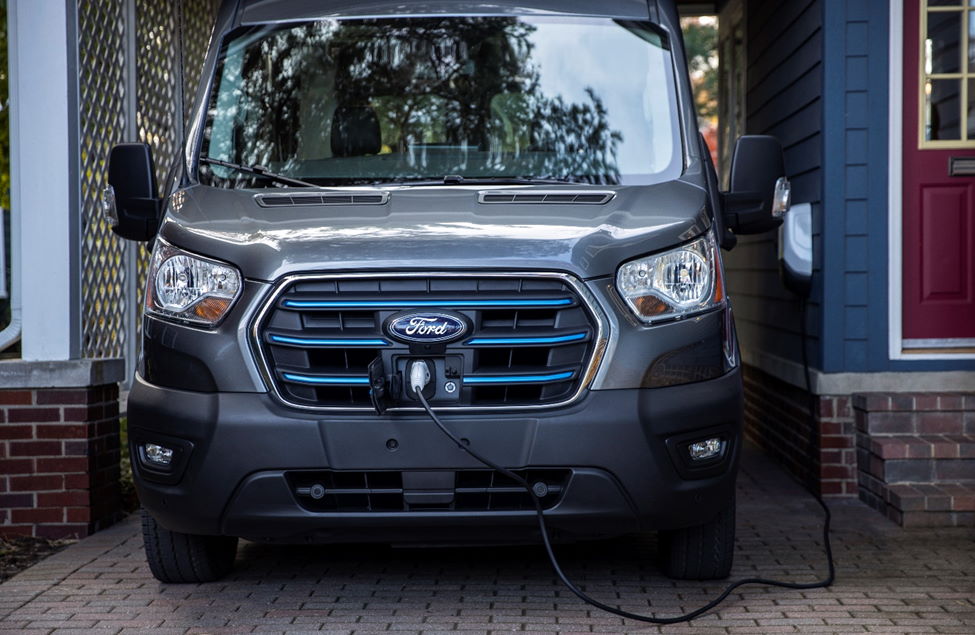 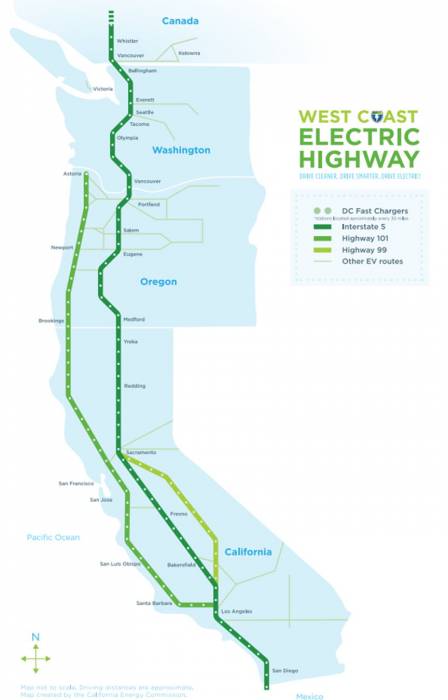 RV hookups help while you’re parked, but on the road, charging infrastructure is everything. Bigger batteries are just like bigger gas tanks — they take longer to fill. The best DC Level-3 chargers can give you an 80% charge in about an hour. Tesla superchargers are faster, but they only work with Tesla cars.

Universal charging infrastructure will be playing catch-up with Tesla for years to come, but the newest e-charging sites could fill a van in 20-30 minutes.

Only a few pilot stations have this technology, and most vehicles aren’t equipped to accept such a high rate of charge. If you want to head out tomorrow, the West Coast is the only area of the country with sufficient Level-3 stations to keep you juiced on the long haul — at least in reasonable time frames for general travel.

A great use case for electric campervans could be an e-van rental fleet. VW’s hippie favorite “California” campervan is poised to be reborn as an EV and might make a perfect West Coast rental if it ever makes it to production in the U.S.

E-vans will hit the U.S. market this year, and the race to delivery is a close one. We’re putting money on the Ford E-Transit landing first on dealer lots — although Rivian may sell more chassis to Amazon directly by then. Mercedes is waiting until 2023, and Fiat-Chrysler is being coy about the RAM ProMaster chassis getting electrified.

With the way battery prices are falling and charging infrastructure is expanding, it may only be a question of when your next campervan will run on electricity. But it will be many years before e-vans become the norm. Remember, tailpipe emissions aren’t the whole story — look at the full lifecycle cost of your vehicle. 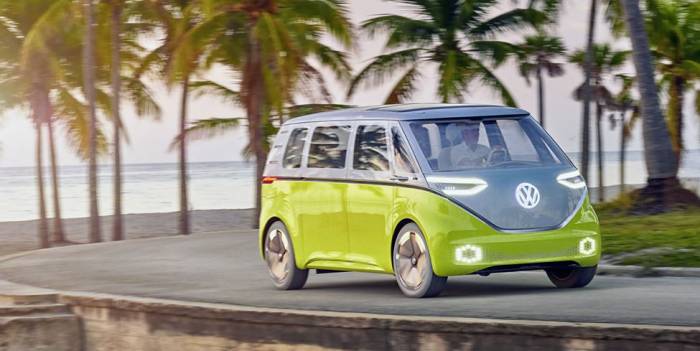 A great option, if you’re not ready to buy or will live in your van full-time, is to consider renting an e-van out on a site like GoCamp or Outdoorsy. The more use we make of existing vehicles, the fewer vehicles we need to produce and the fewer emissions we generate.

The road to conscionable van life will look different for everyone, but adventuring out into nature while leaving a small footprint is what we all look forward to.

Rivian showed off its most recent R1T prototype at Overland Expo West. The vehicle featured a full suite of overland and off-road components. Is this the first full electric overland adventure vehicle? Read more…

The 2021 Winnebago Revel offers a host of new upgrades to elevate the van life experience. Large batteries and a new kitchen are the big upgrades. Read more…

Up Next: TruckHouse BCT: The Luxury Overland Tacoma Camper of Your Dreams