Before you connect to shore power, know the risks and prepare for the worst. One rogue electrical current could inflict catastrophic damage to your RV. Enter the Power Watchdog.

Living and working full-time in a travel trailer or motorhome often involves the occasional RV park stopover. One welcome perk of an RV park is unlimited electricity and the freedom to flip switches with abandon. But can you trust that electricity?

I used to wonder if the no-name surge protector I bought with our coach was anything more than a big empty box. Then a random blast of power tripped all of our breakers — thankfully with no noticeable damage. That’s when I started shopping for a surge protector I knew would do the job.

It has a ridiculously long name, but the Power Watchdog 50 Amp Smart Bluetooth Surge Protector with Auto Shutoff — whew! — was my solution. It looks like a typical surge protector, and, like most, it insulates RVs from wonky watts.

What makes it a world’s first is the active monitoring of incoming loads and the ability to display voltage data via a connected iOS or Android mobile device. It even sends alerts if it detects a bad ground, reversed polarity, or currents outside the optimal range. 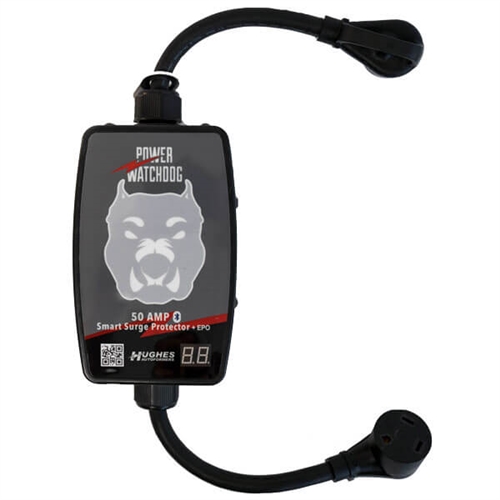 If the Watchdog detects a corrupt power supply, it instantly cuts off the offending current. The face of the unit glows red to indicate the danger, and a small digital readout displays a code identifying the nature of the problem.

When the Watchdog is content with the incoming current, the dog’s face glows white. The advanced internals allow the unit to automatically toggle incoming power on and off as it deems safe.

Because I’m far from an electrical engineer, I didn’t fully appreciate the many dangers presented by unregulated electricity. It’s not just a torrent of volts I have to fret, but also prolonged or recurring drops in current tax electrical components causing a buildup of heat, premature wear, and eventual failure. The Watchdog ensures our RV escapes catastrophic jolts, but also less obvious and progressive damage.

The Proof of Power

The very first time I used the Watchdog, I thought it was defective. I pulled into an RV park eager to try my new toy and plugged it into a 50-amp power pedestal. The face of the unit instantly glowed red.

I notified the park manager, and after a few more tests with additional tools, we determined the voltage was dangerously low. With my cheapo surge protector, I would have never known the stress inflicted on our RV’s expensive electrical system. The Watchdog proved its worth immediately. 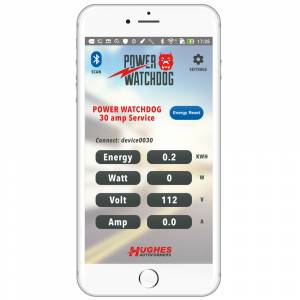 I initially dismissed the mobile app as a novelty, but it’s now a favorite feature. The occasional glance teaches me about our electricity demands in a variety of situations. I’m now a power pedant scrutinizing every inbound volt- and amp-eating appliance.

My new electrical edification pays dividends when not hooked up to shore power and relying on our gas or solar generators. I have a much better understanding of the power we need and use.

Although it’s not as important to me as it might be to others, the app measures power consumption. Some parks bill for electricity, typically charging per kilowatt-hour. The app may help some users avoid surprise power fees.

The Price of Protection

At $275 for the 30-amp model and $330 for 50 amps, the price may weaken some knees. It’s not cheap, but a quick inventory of the expensive electronics in our RV more than justifies the spend. No one wants to buy insurance, but it’s too expensive not to. One momentary episode of watts gone wild could cause thousands of dollars in damages. That’s not to mention the risk of fire, injury, and other horrors.

As much as I appreciate the app connectivity, advanced features, and access to information, the best attribute of the Watchdog is less obvious. It’s my ability to plug it in and walk away that I like most. It’s the peace of mind knowing Sparky the Destroyer can’t get into my house.