Home » Camping » How A Rooftop Tent Raised $2 Million On Kickstarter

A little-known brand just blew past its fundraising goals on Kickstarter with a rooftop tent. This is how. 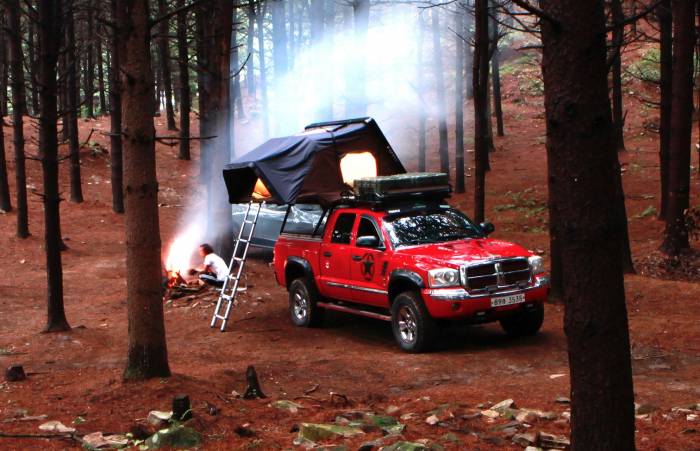 Rooftop tents are not new. Dozens of brands build them in Australia, where the concept originated decades ago. Today, while relatively new to the U.S. market, several brands serve North American consumers.

But don’t tell iKamper. The brand’s current Kickstarter raised $2.1 million with 15 days remaining in its campaign. Those are huge dollars for the crowdfunding site, where the brand set a goal of just $100,000.

The first ingredient in a successful Kickstarter is a good product. The iKamper Skycamp looks to fit the bill. It is the fourth model launched by iKamper, which was founded in 2012 in Paju, South Korea. The brand’s U.S. office is based in Boston.

The brand calls it the “perfect rooftop tent for travelers on the road.” Having used a rooftop tent for trips around Canada and Alaska, the design strikes me as solid, although I’ve not seen it in person. Check out the video below for the elevator pitch.

The Skycamp is a hard-shell tent, meaning the guts of the tent, when closed, are contained within a literal hard shell.

The shell opens upward, canting to one side, revealing a ladder and the tent fabric. By leveraging the ladder, an expanding floor section opens outward while tensioning the tent fabric.

This results in quick setup and large internal space that can sleep up to three adults. 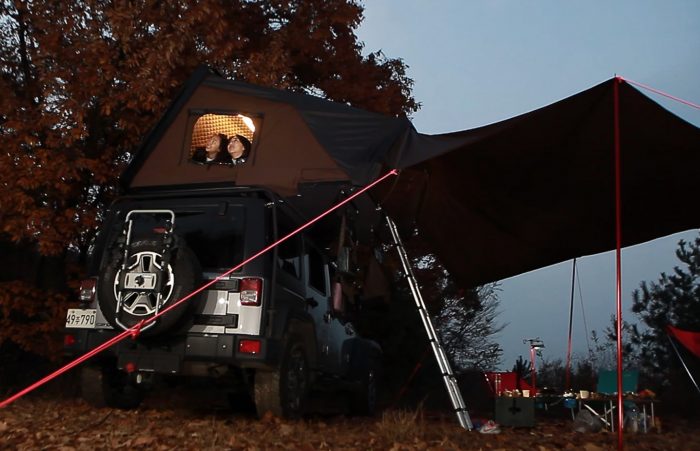 The brand calls it the “first expanding hardshell tent,” which may be the case. Most soft shells expand with a floor that opens like a book, resulting in huge interior space. But for a hard shell, this is unique.

Like most rooftop tents, the rig has a memory foam mattress, venting systems, and windows. The ladder and many of the components look extremely similar to those used by other brands of rooftop tents.

So how did this tent blow up Kickstarter? We reached out to the founder, Soon Gyu Park, to find out.

“Simply put, it looks great!” Park wrote as the first part of a bullet list explaining the brand’s success. And I tend to agree. 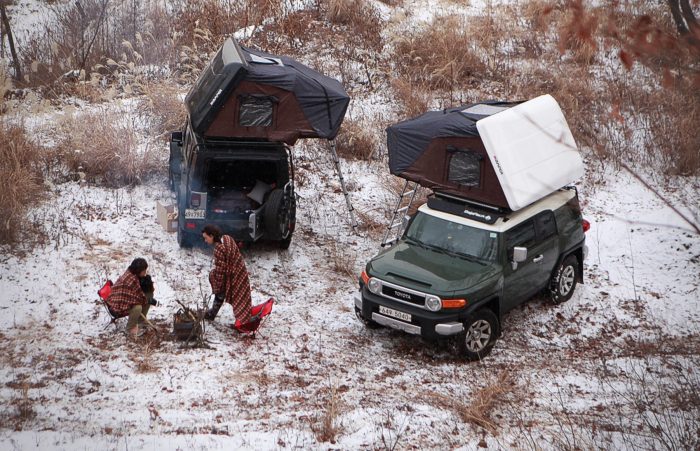 Rooftop tents are a current media darling. They look badass in photos atop rugged SUVs, and Skycamp picked up coverage from mainstream media outlets.

Tech Insider, The Sunday Times, Lonely Planet, Business Insider, and more publications covered the Kickstarter early, boosting it to prominence and fueling the aspirations of many to get outside and camp in comfort.

And why not? As noted, we’ve used and love rooftops tents for certain situations. North Americans take note: This trend is probably here to stay.

Long the realm of niche brands, rooftop tents got a nod from a mainstream manufacturer. Yakima, a juggernaut rack maker, launched the Skyrise this spring for $1,000 to $1,350.

And while the Yakima Skyrise is not particularly unique among the niche, it is a significant indication that North American consumers are on board with this type of camping.

Another brand, Tepui, went all-in on the North American market. Based in Santa Cruz, Calif., the brand made inroads across the continent in recent years.

The tents are a fairly common sight in campgrounds and mountain towns across the West. We’ve tested the Kukenam Ruggedized model and loved it.

With its latest Kickstarter, iKamper capitalized on a burgeoning product segment. And its product, the Skycamp, has some unique features.

For those interested in this style of camping, iKamper appears solid. And with $2 million in raised capital, the brand should be on firmer footing as it launches fully in North America.