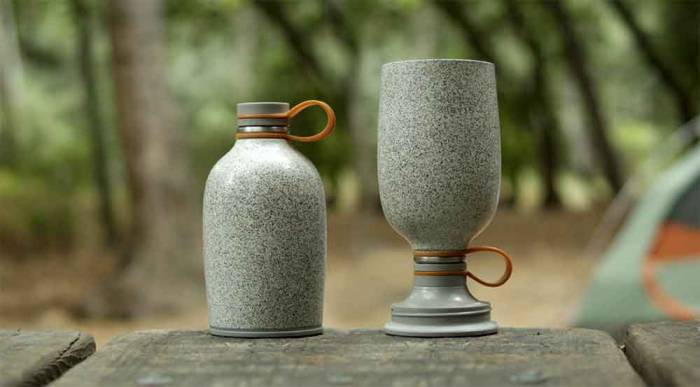 [leadin]A new take on the humble insulated cup comes from an industrial designer tired of seeing people slurp out of canteens.[/leadin]

This redesign is so simple, you’ll probably slap your forehead and think “why didn’t I think of that?”

The Pint is a growler-shaped canteen that stores hot or cold liquids. But twist off the bottom and it converts to an oversize wine-glass shaped drinking vessel in just a few motions.

“I got tired of seeing people drinking coffee from their canteens,” inventor Matty Martin said. A Kickstarter campaign has launched to bring it to market.

We haven’t tested it yet, but it appears that you can convert it without pouring out the beverage it carries. Thus, you could transport your coffee, then flip it over and open the Pint into a cup to savor the drink.

A camper and outdoors enthusiast, Martin worked for three years with Google X. He was a designer working on Project Glass, helping shape the product and its accessories.

The 16-ounce Pint has double-wall stainless steel sides for insulation. It can store coffee or beer, or anything hot or cold, and it is made to regulate liquid temperature for hours.

The plastic parts are BPA-free, and the caps remove for cleaning “because everyone eventually puts coffee inside their bottle and has a hard time cleaning it,” Martin said.

It comes with two finishes, a black carbon and a textured “granite” look.

Despite his roots in the tech world, Martin said he kept an open mind when switching to outdoors gear.

“I work by the idea that a designer shouldn’t add personal style to shape product, but by understanding the core function of the product it begins to design itself.”

The Pint is Martin’s first product made for the outdoors. It launches on Kickstarter on October 20th. For now, take a look at his site and a preview of this new kind of camping bottle at stablegoods.co.