Tackle the great outdoors with solar charging and stainless steel. 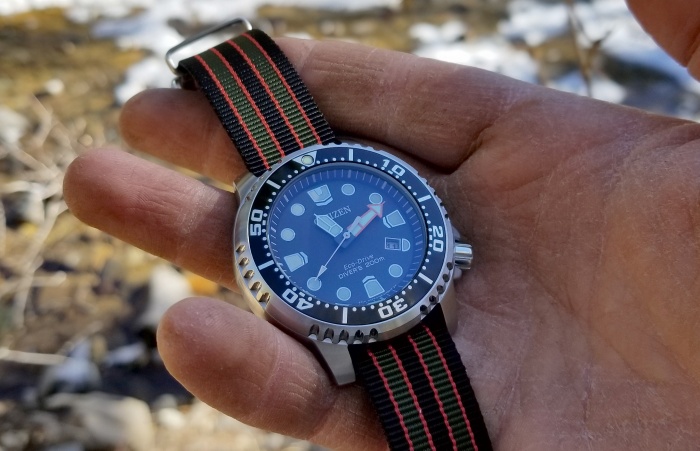 In the active outdoor world, traditional watches have become all but extinct. Wearables such as Fitbits and Apple watches have taken over the wrists of countless adventurers.

But all of these trendy items share one functional concern: the need for frequent charging. The Citizen ProMaster Diver, however, gets its power from the same source as plants and outdoor enthusiasts alike – the sun.

In short: Citizen’s ProMaster Diver sports an uber-visible, glow-in-the dark face, months-long runtime on a single solar charge, and just enough features – submersible to 200 meters, durable construction, “hackability” – that make it a solid investment for those willing to spend more than $200.

The ProMaster’s price generally ranges between $240 and $300 – but you can find it online for less. If you’re thinking this seems a bit high, don’t worry, we’ll touch on that below. For now, wrap your brain around a few of its features.

This Diver comes armed with solar charging, hackable movement, and an anti-reflective mineral crystal, all housed in a 43-mm steel case.

For those not familiar with the term, “hacking” is the ability to pull the crown out and stop the hand from ticking. If you’re into accuracy, hackable movements are the way to go.

Citizen includes a polyurethane strap that denotes dive time and decompression stats. This helps you to make use of its 200-m water resistance.

The indices and hands glow brightly, with a pleasing blue/green compound. The outer diving bezel rotates through a 60-click, one-way cycle.

Under the crystal, Citizen equipped the ProMaster with a date window and applied markers. These circles and polygons are large and easily readable, even in the dark. And it only takes a moment of sun exposure for those radiant areas to really pop.

The name is a bit of a misnomer. Citizen has several models in the ProMaster line, including the newly released version offered here (and reviewed here). For my purposes, however, the ProMaster Diver BN0150-28E seemed to check all the right boxes.

It’s got the classic Seiko SKX look I was interested in, but without the dated feature set. Sure, the SKX is a hard-use icon, but its lack of hackability makes it difficult to set on a second-to-second level. And it doesn’t have mechanical movement, so it’s impossible to hand wind.

Meanwhile, Citizen’s E168 EcoDrive, as noted, is hackable. And it sports a runtime of approximately six months from a full charge in total darkness. But it’s not just the sun that provides power. Indoor lighting will also boost the ProMaster’s batteries, so it’s difficult to imagine a situation where you’d run out of juice.

The big question here is this: Why would you pay more than $150 for a watch you’re planning to take into the wilderness? What if you smack it on a rock, drop it in the lake, or lose it in the brush? Let’s tackle these topics one at a time. 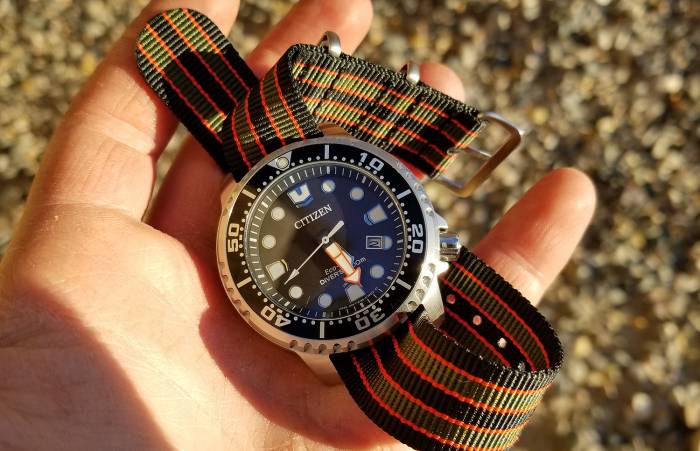 First, this watch is made of stainless steel. Unlike Timex’s brushed brass or Casio’s plastic chassis, this adds a noticeable solidity to the timepiece. And while mineral crystal isn’t as durable as pricier sapphire, it’s good enough to repel most impacts.

Plus, I expect my outdoor watch to earn a few scratches, anyway. Patina is part of the charm.

Second, the ProMaster Diver is rated at 200 meters (or 660 feet) of water resistance. If you can hold your breath long enough to go in after it, your watch is going to be OK. Streams, rivers, and showers pose no threat to this Citizen.

Lastly, the manufacturer has equipped this watch with some pretty substantial spring bars. They’re thicker than those on many of my other watches, which suggests enhanced durability.

And while the included rubber strap is no slouch, I opted to upgrade to a NATO strap for a little extra security. I tend to trim the keeper portion off for a more streamlined ride. Keeping it around, however, would further fix it to your wrist.

After several months of service, I have nothing but good things to say about my Citizen ProMaster. If you’re looking for a rugged, low-maintenance timepiece with a modern classical look, I’d recommend giving it a try.

The most important question with any watch is this: How well does it keep time? Per Citizen’s specs, the ProMaster Diver will operate within the range of plus-or-minus 15 seconds per month. Not bad, right? Compare that to the SKX, with its estimated variance of -20 to +40 seconds per day. Per day!

Granted, most folks report better than advertised timekeeping. But do you really want to stake $200 on it? Between its solar charging, water resistance, and excellent construction, the Citizen ProMaster Diver offers reliability and a solid return on your investment.

Up Next: Battle Of The Beams: Headlamps vs. Flashlights