Maddie Miller, a 21-year-old climber, this weekend broke a record of successfully summiting all 50 American highpoints. It took her 41 days, 16 hours, and 10 minutes.

The trip, called the 50 Peak Challenge, began on June 27th when Miller reached the summit of Denali, unanimously considered the most difficult ascent. (Arnot had planned to embark on that climb, but was unable to accompany Miller on the first peak due to an injury acquired on Mount Everest.)

To date, 273 people are confirmed to have summited all 50 American highpoints.

Miller’s record sets two milestones: the first woman to complete the challenge in under 50 days, a feat only accomplished by two other male groups, and the fastest known time for anyone.

We talked to Arnot at the OR Show in person last week, where she stopped en route to completing the final peak in Hawaii, Mauna Kea. She noted the injury from Mount Everest, which she summited without supplemental oxygen earlier this spring, as keeping her from climbing Denali. 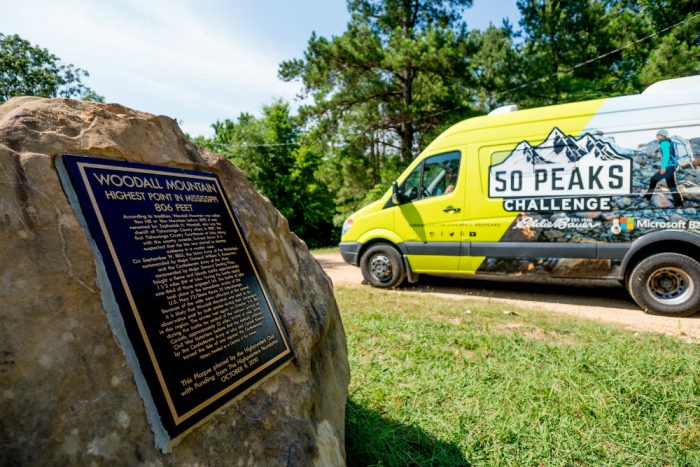 While Miller “owns” the highpoints record, Arnot’s impressive resume and experience certainly contributed to the successful endeavor. Arnot’s recent ascent of Everest made her the first American woman to do so without the aid of an O2 tank, and increased her record number of Everest ascents by a U.S. woman to six.

Dubbed a guide-in-training, Maddie Miller, age 21, is just hitting the scene. Currently in her senior year at Colorado College, she met Arnot during a serendipitous climb of Mt. Rainier arranged by Miller’s parents as a high school graduation present. Arnot had a history as a hired guide for the Miller family of Sun Valley, Idaho.

On Rainier, after the climb, Miller casually mentioned, “wouldn’t it be cool if we did each state’s highpoint?”

The two formalized a mentor-apprentice mountaineering relationship, and began training and planning for the record attempt.

In order to set the 50-peak record, Arnot and Miller had to climb as many as five peaks a day. Some peaks are a few hundred feet and took a matter of hours. Other major western summits took a day or more.

During the Denali ascent, Miller was under remote supervision and guidance from Arnot, who went on to lead the remaining 49 summits and help clinch the record.

To see more for their trip, check out Melissa Arnot’s 50 Peaks Challenge page.