A new book from a beloved outdoors author tells an inspirational story of recovery from alcoholism through rock climbing and nature. 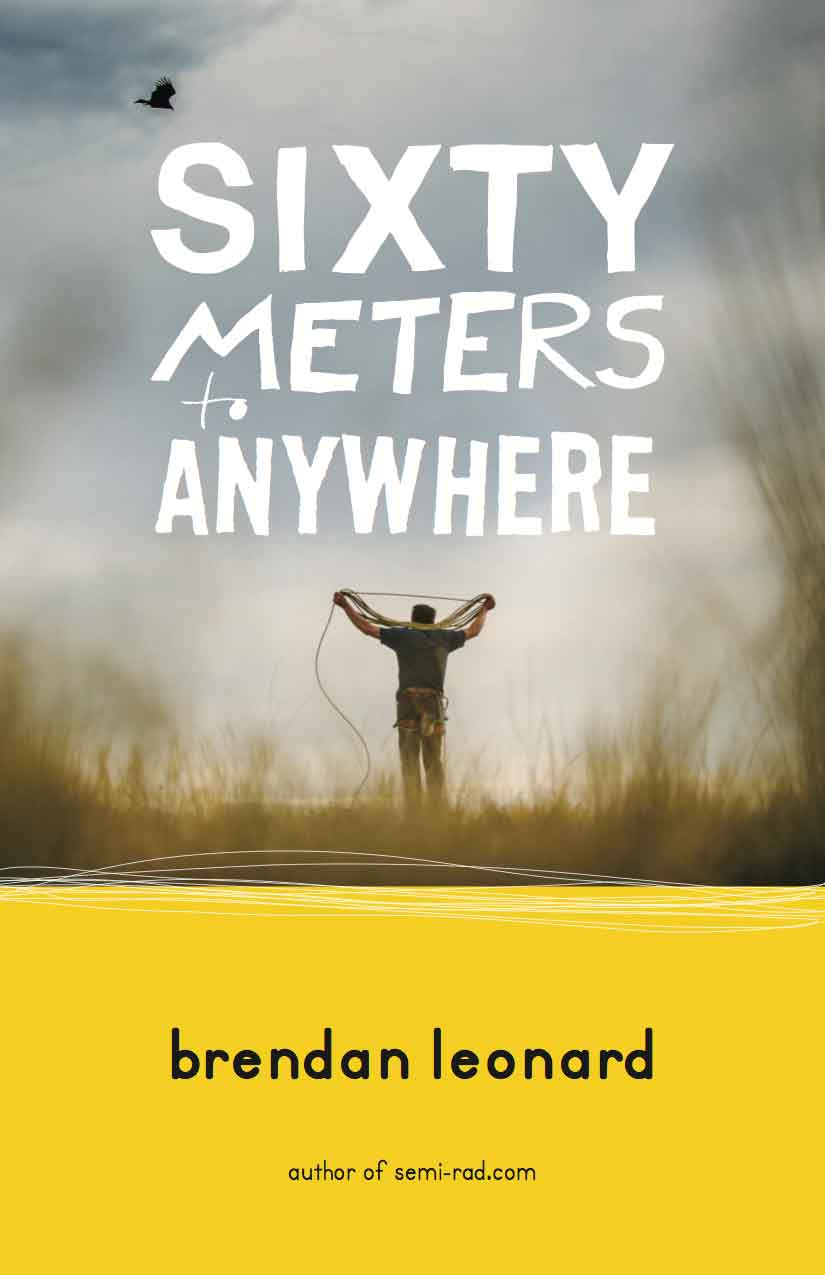 The book’s title comes from the standard length of a climbing rope, and in its 224 pages author Brendan Leonard uses the rope-length range as analogy and literal reference to a tether that helped reorient his life.

Leonard, 37, lives in Denver, Colorado, or on the road in his van. Readers are likely familiar with his hilarious hand-drawn diagrams such as “But did you die?” and humorous essays like “Backpacking is Sexy” from Leonard’s blog, Semi-Rad.com. In Sixty Meters to Anywhere, Leonard takes a more serious, pensive approach that might come as a surprise to those familiar with the lighthearted comedy of his blog.

Sixty Meters to Anywhere is a mountain-based memoir that delves into Leonard’s darker past. It tells the story of a kid from the cornfields of Iowa who finds himself in jail for his second DUI. He bull rushes through sobriety and the painful social awkwardness that follows, ultimately arriving at the end of a 60-meter climbing rope.

This piece of outdoors equipment and the freedom it affords end up changing his life.

Leonard has written an emotionally honest and candid book about his journey through alcoholism and sobriety. His life became about what he did not do, and left him vulnerable, full of doubt, and lacking identity.

You wouldn’t know it today. Brendan Leonard is a popular writer, surrounded by dozens of people at social functions. He directs short films and writes for magazines. Basically, Leonard is the guy most people want to be like. But his memoir shows us the pain that he went through, from hitting rock bottom, to realizing all the bad things that were happening were likely the result of the fact that he was an asshole, to years of chain-smoking sobriety.

Leonard’s genuine writing style invites readers into his journey. “There were… days I was drunk, and days I was looking forward to getting drunk.”

Perhaps that is why the book is refreshing. This was no look-at-how-cool-my-life-is book. Much of it is not even about the lifestyle he now lives. Rather, the book is the story of the slow, painful process of growing up and becoming healthy, illuminated by self-effacing prose that portrays the protagonist as an accessible hero.

“At twenty eight, I had graduated from pointless shit like sitting on a barstool for hours at a time to pointless shit like crawling sideways across a meaningless rock face and wishing I could just get a few feet farther. It was exactly what I needed.”

One of my favorite parts of the book is when Leonard’s father calls to tell his son, several years removed from his second DUI, that he himself was caught driving after too much to drink and then urinating on the side of the road. The officer who caught him made the dad decide between an arrest for DUI or indecent exposure. I won’t wreck the punchline, but it ends with a howling good joke.

I would guess many people can relate to the pains Leonard experienced growing up. If not through alcoholism, then social anxiety, depression, shame, or failed relationships.

Those who are familiar with Leonard now — the charismatic, funny, and downright cool guy — might be surprised to learn of his not too distant past struggling with identity. His story is powerful. And many of us who love the outdoors can relate to what Brendan has discovered.

Perhaps this book will not resonate with people who are not drawn to wild landscapes, climbing, or living in a van. But I bet that even city-dwellers know what it’s like to be searching for a lifestyle that fits, that just feels right regardless of personal success or accolades.

Leonard asks an important question that rings true for those who dream of following their passions: “Is it more foolish to risk your life or risk wasting your life?”

Sixty Meters to Anywhere, while written by a climber, is not a climbing book. You don’t have to be a climber to relate to this book. This book is not reserved only to the desert rat or the mountain monkey. Because ultimately, this is a book about finding an identity, and that is a universal story.

—Sixty Meters to Anywhere ($16.95), published by Mountaineers Books, is available now on Amazon.com and in bookstores everywhere.

Up Next: Everest Region ‘Disaster Relief Center’ Opens This Spring