Hoo-boy. Let’s say that Jon Krakauer does not look good in this portrayal. If you’re familiar with Krakauer’s version of events in “Into Thin Air,” and also with those of Boukreev in “The Climb,” well, let’s just say the movie takes an interesting angle.

Krakauer’s version of events, where he questioned Boukreev’s judgment in refusing to use supplemental oxygen while responsible for climbers in Fischer’s expedition, drew the two into a real-life spat and led Boukreev to counter “Into Thin Air” by writing “The Climb” with Gary Weston DeWalt.

While the film is subtly critical of Boukreev’s bravado – Hall, adult-like, declares his guides will all have oxygen, or be fired – it makes the Russian look comparatively heroic in the blizzard while he marches out into the blinding wind and snow to retrieve lost climbers (none of Fischer’s clients perished in the storm); meanwhile, he beckons Krakauer to help, but the writer opts to stay in the tent, whining about snow blindness and moaning like a sniveling wimp. 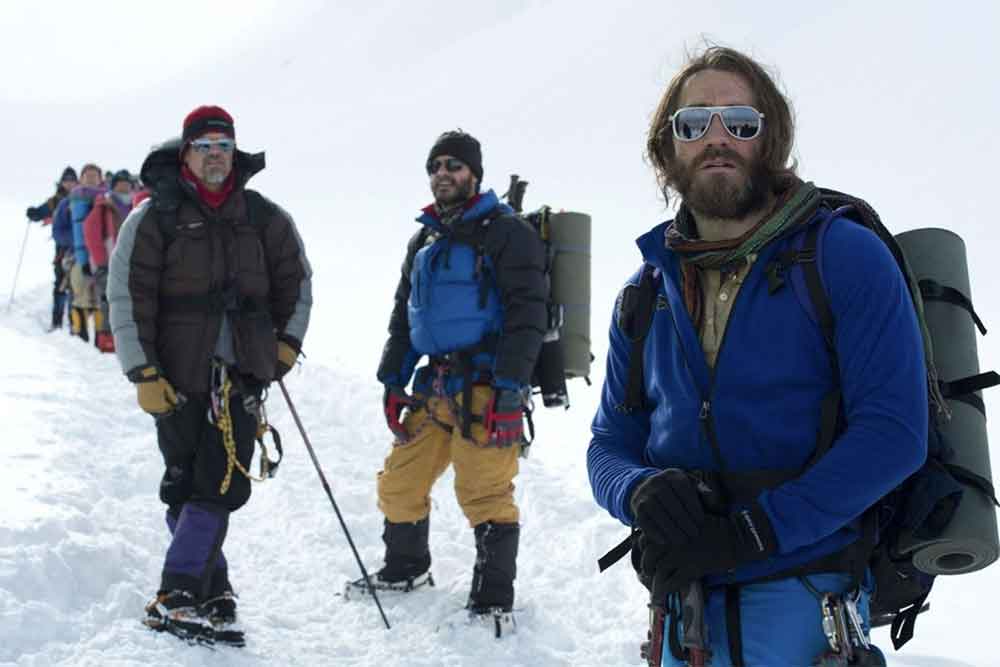 Later, when the group is discussing helping their physically compromised teammates, Krakauer declares “it’s gonna take all we’ve got just to get ourselves down…I don’t wanna die, man.” He reprises the role of sniveling wimp when they return to basecamp, sobbing in the arms of Hall’s camp manager Helen Wilton (Emily Watson).

I’m a Krakauer fan and am inclined to think this was mostly due to subpar, melodramatic acting by Michael Kelly (surprising, given his brooding performance in House of Cards). Either way, in a film that largely avoided taking sides in the various controversies that emerged after the tragedy – Sandy Hill Pittman, derided in “Into Thin Air” as an aloof, unprepared socialite, gets pretty neutral treatment, for example – Krakauer looks like an oaf. I hope he responds.

Some of the compromises of plot and character development are the price you pay for the big-studio dollars needed to create a virtual setting so truly spectacular it doesn’t feel virtual at all.

And despite familiarity with the story, I recommend this movie. This isn’t the time to turn up your nose just because you’ve read the book – or books. Mountaineering is on the big screen, people.

Like me, any climber and/or GearJunkie reader who sees it will probably find something to nitpick; but the true test of a mountaineering film is whether it makes me want to go climb the thing myself after I watch it. That wasn’t the case when I saw “Vertical Limit,” but it is absolutely was the case after “Everest.”

“Everest” was released on IMAX screens last Friday and opens everywhere this Friday (Sept. 25th, 2015). You can find show times and buy tickets at everestmovie.com.