But the niche activity has limited participants in the highest grades. I wanted the low weight for big multi-pitch backcountry ice that involved long approaches. I wondered if the aggressive tool would work for ice that wasn’t in the realm of the “world’s hardest.”

I tested the Grivel Dark Machine in Alaska last winter, strapping it to my pack for long ski or snowshoe approaches to climbed and unclimbed objectives. The hardest pitch clocked in at WI5+ and the lowest at WI3. Some classics were repeated, and a first ascent was made. In just over a week of almost daily adventures, I honed in on what and where the Dark Machine shined and when it was adequate.

In short: The Grivel Dark Machine is one of the lightest technical ice tools I’ve used and carries logical advantages. But the lack of weight and high aggressiveness was sometimes a noticeable limiter. If moving less mass can mean the difference between success and failure, the Dark Machine fits that bill. It’s also stellar if the menu of ice is limited to steep climbing. But it isn’t ideal for less brutal angles and broader objectives.

The main shaft is carbon-wrapped aluminum, while the handle is carbon fiber. This blend of materials makes the most contribution to the impressively light weight. The verified weight is 17.2 ounces each (with the stock Ice Vario pick). The only ice tool I’ve used lighter than this is a 100% carbon/Kevlar shafted Trango Kestrel. This tool weighed 15.2 ounces with the stock pick.

The bottom handle is carbon fiber with an aggressive textured clear coat, while the upper handle has a minimalist rubber sleeve. The head, spike, pick, and head bolts are steel.

The handles and main shaft are smaller in diameter than any other technical ice tool I own. The curvature of the tool is also one of the most pronounced.

Grivel supplied this Dark Machine with the Ice Vario pick. The brand labels the Ice Vario as a “mountaineering and ice climbing” pick, which seemed most appropriate for my Alaska trip. Grivel offers many Vario pick options. Some are more oriented toward mountaineering, and others are directed at pure ice and mixed climbing. It also provides compatible Vario accessories like hammers and adzes.

As soon as I picked up the Grivel Dark Machine, the exceptionally high center of mass and minimal total weight caused some concern. Usually, the high balance point is a good thing as it adds power to the swing. But I had never swung an axe with such an exaggerated balance point. Since I use hammers on big ice missions, I packed a pair of the Hammer Varios. These would add 2.4 ounces to the back of the head. Yes, it would push the balance point upward. But I reasoned that the added weight would provide a more familiar feeling.

I also felt the handles were on the small side, so I brought some tape. I knew I was testing different gloves, and it seemed better to have the option of increasing grip size than having them be too big. I learned later that this was Grivel’s logic as well. It purposely kept the grip small and avoided shaping it so climbers could alter the grip to best suit their anatomy.

I took the Dark Machines on a warm-up run on a moderate and classic multi-pitch route that varied in grade from WI3 to WI4. I immediately wanted more weight. I felt like I was altering my normal swing due to the very low weight and high balance point. The only description I can make is that on lower-angle ice, I felt like I had to stiffen my wrist more than usual. I couldn’t just let the axe rotate at my wrist, then allow the handle to turn in my hand at the end of the swing. I needed more oomph, which I did with my entire arm.

Then on very low-angle ice, the extreme curvature of the tool forced the spike to hit when the pick did, popping the pick out. This wasn’t dire as the angles were so low, but it did reinforce that the tool is destined for more challenging ice and may not be the best choice for adventures into unknown territory.

A few pitches up, we hit thin, hard ice. If the pick hit stone or glanced off unforgiving ice, the reverberations through the Dark Machine were harsh. This surprised me as the Trango Kestrel didn’t react this way, nor did any of the aluminum shafted tools I’ve used. I chalked it up to the carbon-wrapped shaft having less damping ability than carbon/Kevlar or aluminum. I thought this characteristic could lead to more fatigue over a long day or multiple days of climbing.

But oh, the low weight! Some of our routes required hours of approach skiing or snowshoeing. My total pack weight was noticeably lighter when the Dark Machine was the tool of the day. Ditto on long routes; the benefit of carrying less mass on both my arms and body was noticeable. My shoulders felt it the most.

On a later outing, I added the Hammer Varios to both tools for added swing weight. The hammer made the tool feel better when it stayed straight. But the downside was that if the pick was off-angle or twisted on impact, the increased weight at the back of the head added to the rotational momentum. The tool would turn in my hand more, or I had to grip harder for the swing to stick.

When It Was Stellar

When angles kicked back or formations forced leaning back, the aggressive shape of the Grivel Dark Machine allowed a natural and intuitive swing. I felt almost like I was sport climbing. The pick angle matched the steep ice angle without directed efforts, and hooking features overhead was a joy. I felt the tools were at home when the face was vertical, but the formations above cast shadows. The low weight saved my arms and shoulders when the protruding features didn’t let up. This was when the tools had no equal — steep, challenging ice was the Dark Machine’s domain.

All of our routes but one ended up being in the shade, so I wore thick gloves. The smaller handles worked fine in this scenario. I appreciated the option to wrap them with tape to alter the size. I wished that other brands would adopt this logic.

For this backcountry big ice trip, the Ice Vario picks were ideal. They penetrated hard ice and hooked well, and I didn’t feel like they shattered brittle ice any worse than other picks. The Ice Vario picks proved remarkably robust, holding their edges well for the entire week and giving me the confidence to thrash them when required. After all that Alaska could dish out, the only visible wear on the entire tool was on some of the decals.

I chose the Grivel Dark Machine primarily based on weight. I had a lot of ground to cover horizontally and vertically, and the days were long. The main goal was energy efficiency. I knew the tools were shaped for challenging grades, but I hoped they would work. And they did, with a few caveats.

The Dark Machine crushes on difficult ice. When you get into WI5s and the formations kick you back, the combination of aggressive tool shape and angle combined with low mass can help you be an ice-climbing hero. But the tool was less effective and sometimes awkward on easier terrain, which many difficult pitches have before or in between.

The Grivel Dark Machine was still viable for the wide-open menu of big, backcountry Alaskan ice. But it would be most effective when the objectives are narrower in focus. Or if the consequence of not having a tool destined for more challenging terrain was dire. If success comes down to a stopper section of steep ice at the limit, then yes, this tool will go on my pack.

This tool would rage for more challenging routes in places like Ouray Ice Park. I intend to prove that at the first opportunity. But I now know that taking a less aggressive tool with different weight distribution could be a better choice for ventures into unknown terrain. 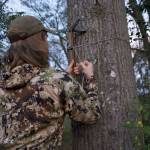 For less than $250, the Tethrd Skeletors offer a lightweight, quiet, and durable set of four climbing sticks. Read more…