In a sport full of edges and ledges, La Sportiva is helping climbers bring out their best performance with the exact opposite. No-Edge climbing shoe technology brings the foot closer to the rock.

La Sportiva’s patented No-Edge technology is already baked into the Futura, Genius, and Maverink models. And it just made its debut on the women’s Futura as well.

The technology has a loyal following. “No-Edge shoes are my go-to for comfort and ease of use,” said Alex Honnold, who recently set a speed record on Yosemite’s El Capitan. “They’ve just made climbing more fun and comfortable.”

Giuliano Jellici, the father of La Sportiva’s current research and development manager, first envisioned the idea 20 years ago. In 1998, the Mantra, a soft slipper of a climbing shoe, was the first iteration of the No-Edge concept.

“It was possibly ahead of the times for climbing technology, but the Mantra was mostly overlooked by the climbing community,” said Pietro Dalprà, La Sportiva climbing footwear product developer.

“Giuliano developed the technology with the idea that rock shoes using No-Edge technology would give the climber the most ‘natural’ fit in a shoe,” he said.

In No-Edge models, the sole wraps and follows the natural shape of the toes. It eliminates the sharp angle that creates an edge on traditional climbing shoes.

No-Edge Technology Is Gaining a Foothold

Anyone who climbs regularly knows that increased sensitivity in a shoe is a critical performance point, especially for standing on small holds. 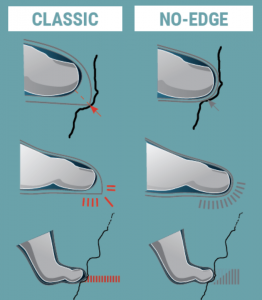 Essentially, the radius of the soft No-Edge sole has a bigger rubber surface area. That means more of the sticky stuff comes in contact with footholds. The technology delivers a subtle sensitivity that can be the difference between a send and a fall.

“The rubber layer is quite thin, which creates incredible sensitivity and allows the foot to stay very close to the rock or plastic. The tension that continuous rubber creates on the soles and toecaps helps with pressing directly onto footholds, conforming and shaping around them, without the ‘break,’ or edge, between the sole and the toecap on edged shoes,” Dalprà explained.

“The more you climb in them, the more you become aware of subtle differences in foot placements,” Dalprà said.

“No-Edge can improve a climber’s footwork by increasing their body awareness, lead to being lighter on their feet, and by encouraging more fluid and natural movement.”

Elite climber Keenan Takahashi likes the No-Edge for smears, where the toe rolls easily in the gym. It works on volumes and slab-smearing, and on a particular crux where you know your feet slip, he said.

“I’m primarily a boulderer who obsesses over minutiae, so there are many times where I’ll climb with two different shoes to maximize efficiency for crux moves,” Takahashi said.

Norwegian climber Rannveig Aamodt appreciates the confidence boost No-Edge gives her on limestone. “I feel like the No-Edge technology is almost like cheating on certain rock types,” she said.

“It really helps me on limestone because I get a lot more surface contact between the rubber and the rock, and it can literally turn a tiny glassy blob or slippery dish into a solid-feeling foothold.”

Who Should Try La Sportiva No-Edge? Dalprà knows No-Edge is technology but said it’s become more of a “philosophy” in the climbing world. No-Edge shoes can help anyone — from beginners to elite athletes — climb in a more natural, fluid style.

Honnold said No-Edge has helpful advantages for newbies. “In a lot of ways, the No-Edge concept is almost better for the casual gym climber who doesn’t want to worry about his/her footwork too much. Just throw your foot on a hold and expect it to stick!”

Aamodt agrees the technology can assist all climbers. “The benefits are totally unrelated to how hard you climb,” she said. “There are 5.10s in Colorado that I find significantly easier when wearing No-Edge Futuras simply because they have the ability to turn small, slippery holds into holds that feel solid.”

Despite the advantages of La Sportiva’s No-Edge innovation, Dalprà doesn’t expect “edged” climbing shoes to go away any time soon. There are some very specific cases where a shoe with an edge helps. For example, an edge is nice for projects where you’ve already memorized the footholds or on big-wall climbs where super-precise footing is essential.

Additionally, a climber’s weight, personal preferences in comfort and fit, and terrain will weigh into any climbing-shoe decision. That said, No-Edge is a clear choice for anyone looking for a softer, grippier way up the wall.

This article is sponsored by La Sportiva. Check out its line of No-Edge rock climbing shoes here.