Steve Plain became the fastest person to reach the peak of every continent’s tallest mountain this week, finishing the coveted Seven Summits in 117 days. 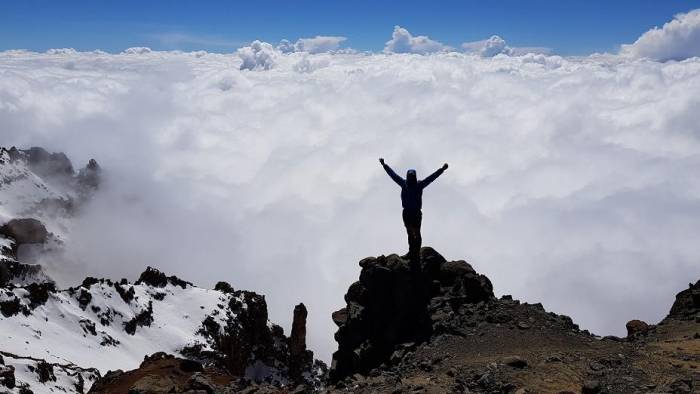 Four years after a spinal injury nearly left him paralyzed, Australian mountaineer Steve Plain conquered one of the world’s most challenging physical feats.

On Monday, the 36-year-old successfully summited Mount Everest, setting the speed record for climbing the highest point on every continent.

New 7 Summits World Speed Record. Project 7 in 4 complete. Here Steve stands on the summit of Everest, with Jon @mountexpeds and Pemba. Pemba assisted with Everest and Lhotse while Jon has been with Steve as friend and climbing partner for 6 of the 7 summits plus the high double, Nuptse attempt and Kosciuszko Steve has inspired many on his journey and we thank everyone for their wellwishes along the way and particularly since Monday. He will soon be back, rested and ready to return his many messages. Until then stay tuned for more photos in coming days. #Project7in4 #complete #everest #nepal #7summits #teamwork #believe #achieve #celebration #culmination #support #recover #mountain #mountaineer #mountainclimbing #worldrecord @mounteverestofficial @everest_roofoftheworld @natgeoadventure #abcmyphoto #nevergiveup

Atop Everest’s 29,029-foot peak, Plain stopped the Seven Summits clock at 117 days, 6 hours, 50 minutes. This is more than one week faster than the previous record of 126 days, set last year by Polish climber Janusz Kochanski.

Plain set off on Project 7 in 4 (seven summits in four months) on Dec. 20, 2017. He followed a planned route that began in Antarctica, actually tagging eight summits. His accomplishment is the harder version of Seven Summits postulated by early climbing pioneers. The route includes both Carstensz Pyramid and Kosciuszko in Australia.

In order, he summited the following peaks:

“What a day. I’m actually lost for words,” Plain wrote to Instagram followers after summiting Everest this week. “Three and a half years ago I was lying in hospital with a broken neck and at that time set myself the goal climbing the 7 Summits in under 4 months. Today I completed that goal.”

In December 2014, Plain suffered serious injuries while swimming in the ocean. According to his blog, a wave turned him upside-down and dumped him into the sand.

Despite doctors informing Plain he would require a wheelchair, he quickly resolved to climb all seven summits. Following intense physical therapy, Plain made several “practice runs” on some of the world’s most notable peaks.

Less than a year after the injury, Plain summited Mt. Aspiring in New Zealand. In 2016, he summited Mt. Yanapaccha, Mt. Chopicalqui, and Mt. Alpamayo in Peru. Then, he summited the Himalayas’ Ama Dablam and Lhotse over the following year.

Hats off to Steve Plain for crushing one of the most coveted records in endurance and climbing, and for beating the odds to tell this inspiring story!

Up Next: Ortovox Recalls 3+ Avalanche Transceivers