Ski jumps are typically reserved for the high-flying efforts of skin-suit-wrapped winter athletes. But this summer, the Red Bull 400 event series transforms ski jumps into race courses. And one of the first events of the tour was at Michigan’s own Copper Peak.

'The Hardest 400 Meters Of Your Life'

Sprint, or slog, more than 40 stories toward the sky up a 35-degree ski jump for glory... and sheer pain. Read more…

Check out the video below to watch the sufferfest.

The Red Bull 400 took place on May 12 in central Michigan with 450 competitors. The men’s and women’s divisions crowned the winners Ian Torchia of Marquette, Mich., and Anna Mooi of Ironwood, Mich., with times of 4 minutes 48 seconds and 7 minutes 15 seconds, respectively.

Now entering its eighth year, the Red Bull 400 continues to expand its reach with 17 events across the world.

“It was awesome to have an international event come to our town – for the exposure and to highlight the awesome recreational opportunities we have here in Ironwood,” said Mooi after her victory.

The course has runners ascend 140 meters in elevation across 400 meters in distance. At peak steepness, the climb reaches 37 degrees, with athletes forced to tough it out on all fours.

According to Red Bull, the lactic acid buildup is about 20 times more than normal running, and muscles struggle to get enough oxygen to function. Ahmet Arslan, Turkey’s defending champion, has won 14 of the 16 Red Bull 400s he’s attempted.

“You must use the whole body,” Arslan said of the Red Bull 400. “When I reach the finish line, I don’t feel my muscles.” 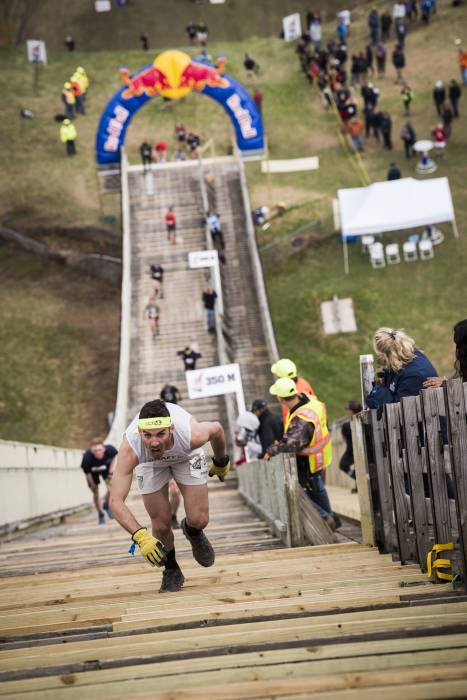 He says after 100–150 meters, his muscles and lungs tightened up, and the lactic acid buildup was overwhelming.

The ski-flying hill has not seen an international sports competition since 1994. But as we reported in February, Copper Peak organizers hope to re-establish the ski jump and region as a “global outdoor recreation destination.”

Up Next: Broken Back, Shattered Hip: 100-Mile Run 10 Months Later