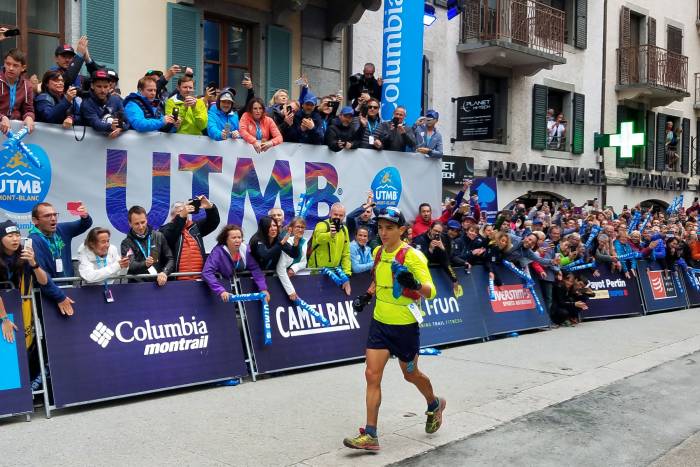 Many expected the iconic Ultra-Trail du Mont Blanc men’s race to be a showdown between fan favorites Jim Walmsley and Kilian Jornet. But Xavier Thévenard took the crown while Francesca Canepa scored an epic win on the women’s side.

This was Thévenard’s third win at the prestigious 106-mile ultratrail race, held Saturday.

“I tried not to go too fast with my pace,” Thévenard stated shortly after greeting the crowd. Having run a smart race, he said he didn’t experience any real lows and wanted to manage it better than last year by pacing himself.

He remained level-headed, showing no signs of fatigue and maintaining an exceptionally humble spirit. “In an emotional trail race like this, you cannot get ahead of yourself,” he said.

But many didn’t see this year’s results coming. The race heavily banked on a showdown between two of the strongest contenders: HOKA athlete Jim Walmsley and Spain native Kilian Jornet. Cold conditions, injuries, and even bee stings were enough to take out many on the course.

And Thévenard had his own issues leading up to his latest victory. Just last month, he was disqualified from the Hardrock 100 in southern Colorado for receiving water and ice away from an assigned aid station. But the setback only seemed to fuel his impressive finish at the Ultra-Trail du Mont Blanc in 20:44:16.

“I wasn’t thinking about it really. But when I was running more towards the front with Zach Miller, I started to think more about the victory. I knew that the road was still long. My advantage was when I saw that Zach Miller wasn’t feeling as good at the time,” he said.

“I was running my own race; it’s an ultra-trail, and anything can happen. I do not run after the victories, but I run to be in the mountains and have fun.”

Italy’s Francesca Canepa earned her first Ultra-Trail du Mont Blanc victory with a time of 26:03:48. Following a similar strategy to Thévenard’s, she stayed consistent despite the grueling conditions and remained conservative with her speed.

Canepa’s journey is inspiring considering the former snowboarder only started running six years ago at age 40. “Winning was entirely out of my mind before the race,” Canepa told the press at the finish line.

Spain’s Uxue Fraile took second place for the women’s side at 26:08:07. And a surprised and emotional Jocelyne Pauly took third at 26:15:11.

The UTMB: A Truly Epic Race

Stretching across sections of France, Italy, and Switzerland, Ultra-Trail du Mont Blanc (UTMB) is one of the most prestigious ultratrail races in the world. The race is known for its insane gain — over 32,000 feet — and cutoff time of close to 46 hours.

The 15-year-old event was especially harsh this year. It caused close to 600 DNFs from start to finish.

Gladiators like Magda Boulet were taken out for brutal weather conditions and injuries throughout the course. This year’s conditions sent runners out in freezing temperatures, rain, and wind. According to the UTMB’s Twitter account, strong winds were expected to drop temps to 14 degrees F with windchill. The first 50 miles were brutal for everyone, a scene reminiscent of this year’s Boston Marathon.

As leading men dropped out, it cleared a path for others to move into podium position. Romanian runner Robert Hajnal took second at 21:31:37, and Jordi Gamito from Spain energetically claimed third place at 21:57:01.