If it ain’t broke, don’t fix it. And while the Anasazi Moccasym wasn’t perfect, Five Ten had damn well better make the update — the NIAD Moccasym — better.

The original Five Ten Anasazi Moccasym grew to be one of the most popular slippers since its release in 1992, adored by rock climbers across all disciplines. Climbers had to earn the fit, but the natural leather upper stretched to become a second skin.

The first-ever asymmetrical shape moved the tip of the shoe to the big toe for more power. The sensitivity placated the most critical boulderer, and the thin profile fit well into cracks. And it was the first shoe to use the now-legendary Stealth C4 rubber. They never edged well, but it was a slipper, and rock jocks understood.

When Five Ten announced a rework of the staple slipper in the form of the NIAD (Nose In A Day) Moccasym, I was skeptical. They became available in April, and when I first put them on, the warning lights flickered — they were noticeably stiffer than the originals. But with time, I realized the added stiffness addressed a primary weakness of the original Mocc to produce a better tool.

The Five Ten NIAD Moccasym may give up some of the original sensitivity and softness, but the shoe provided better edging, and the trade-offs were minimal. Other nuanced improvements were added to the package, making the NIAD Moccasym a better weapon overall. 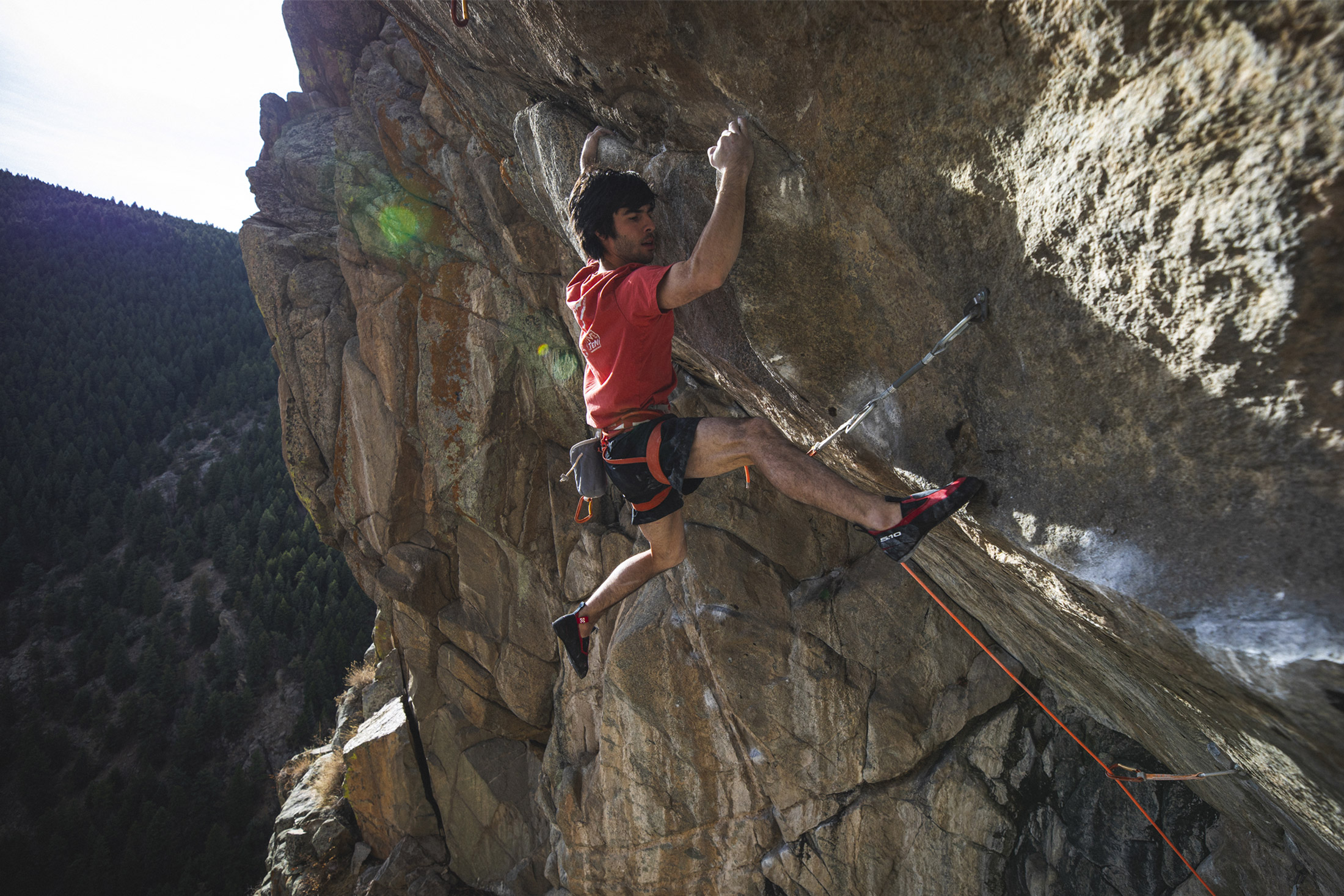 Out of the box, the new Moccasym was much stiffer, but over a 4-month testing period on boulders, gym walls, and boards, multiple times a week, the shoes softened significantly. Not quite to the softness and sensitivity of the originals, but close. Much of this is due to the 4.2mm C4 outsole (versus 3.5 mm of other NIAD Anasazi shoes) and a 1.0mm full-length Bontex midsole.

The good news is the leather upper conformed to my foot and continues to do so, delivering that oh-so-nice painted-on fit. The leather is a new HT (high-tear strength) version, directly addressing the blowout issue for well-worn original Moccs, which I assumed was the opportunity cost for leather that formed to the foot. 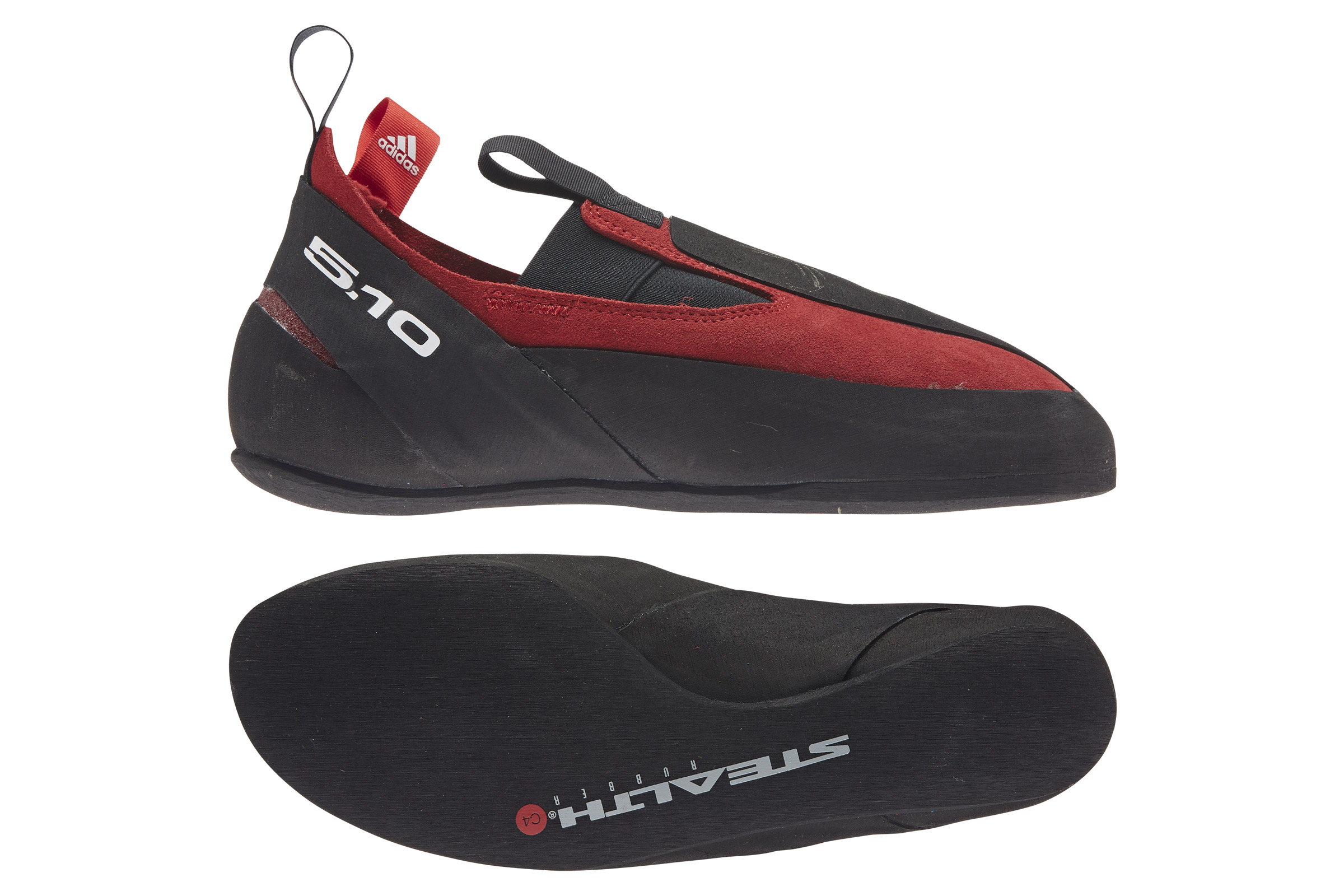 Other Updates on the NIAD Moccasym

The heel slingshot rand is now two pieces instead of one, and they are larger and relocated. And they produced a touch more tension than before, which I appreciated.

It’s not “redpoint,” curl-your-toes tension, but it made the shoe more usable on more minor features. Another benefit of the two-piece rand is a better-fitting heel, as the rand overlap isn’t at the center of the heel anymore.

There are rubber patches over the toes and instep now, and they added grip for modern-day hooks and scums. I also felt they offered a little more protection from sharp features during super-high-pressure toe hooks.

Five Ten’s slipper update fit me just as well as the original Moccasym; I have a narrow heel and a wide forefoot, with a thin vertical profile. I felt the leather touching every part of my foot without gaps other than the heel.

A small break in the rubber coverage between the slingshot rand and the rubber heel cup formed a small “ledge” where I could feel the difference in tension and contact. But I never thought it affected performance.

The amount of tension provided by the slingshot rand felt ideal to me for high-performance training. It wasn’t as much pressure as a high-stakes redpoint shoe, but it was more than a training shoe fit. It was enough to prevent rolling on a small edge, but I could keep the shoe on for extended durations.

For training and local steep bouldering, the Five Ten NIAD Moccasym won me over. The sensitivity was great for our local limestone bouldering’s slick and polished features, and the Stealth C4 rubber delivered outstanding adhesion.

I could edge confidently on smallish features due to the slight gain in stiffness and slingshot rand tension, but in no way were these edging masters. But it was a welcome improvement over the original Moccasym.

They stabbed moderately small pockets well (down to a two-finger). And although the shoe is flat, there was enough conformity to pull my hips in if there was a positive lip on the pocket.

The NIAD Moccasym could heel hook as well as any other slipper I’ve used. It sufficed when the heel hooks statically held my hips in closer to the wall up to about 40 degrees overhanging, on one-pad holds. But for heel hooks that required a lot of power, the Mocc fell short, just like any other slipper in the same situation.

My favorite performance-oriented attribute of the Mocc was the ability to train at a high level on the boards or in the gym while still being comfortable. I could keep the shoes on for an hour of training without issue.

An Update That Doesn’t Suck

When it comes to athletic shoes, I know what I like, and when I hear an update is coming, my usual response is to buy up all the stock I can. And I felt the same about the Moccasym.

Yes, the original had shortcomings, but across a wide range of purposes, the shoes were all-time favorite slippers to many.

But Five Ten did the OG Moccasym justice with this update. The NIAD Moccasym retains the fit, comfort, and Stealth C4 rubber with changes that make it a better all-around slipper. I may be old and crusty, but I admit it when a brand touts “new and improved,” and it turns out to be just that.