Even the biggest names in outdoor sports are in lockdown. But they’re still getting after it. Here’s how they’re working out and what they’re listening to for motivation.

Two surefire ways to beat the doldrums are working out and rocking out. We talked to some of the greatest endurance running, climbing, skiing, and cycling athletes to find out how they’re doing both.

From strict regimens (like Ashima Shiraishi’s) to exploratory walkabouts (like Rickey Gates’), these athletes are doing everything to keep their edge. And their taste in music — well, see for yourself!

Who Is Lael Wilcox?

Ultra-endurance bikepacking is about as niche a sport as you'll come across. But in short order, Lael Wilcox has helped raise it out of obscurity and even cultivated a cult following. Read more…

“I’m doing all of my strength training and yoga on the back patio in Tucson, Arizona,” Wilcox said. “Wheelie Practice is at the local park half a mile away. All of my favorite routes close to home in Tucson for riding, running, hiking, and blading are on my komoot account.”

Wilcox added, “For longer days, I love listening to audiobooks. My recent favorites are the ‘Cormoran Strike‘ private investigator series by Robert Galbraith (a pen name for J.K. Rowling).” 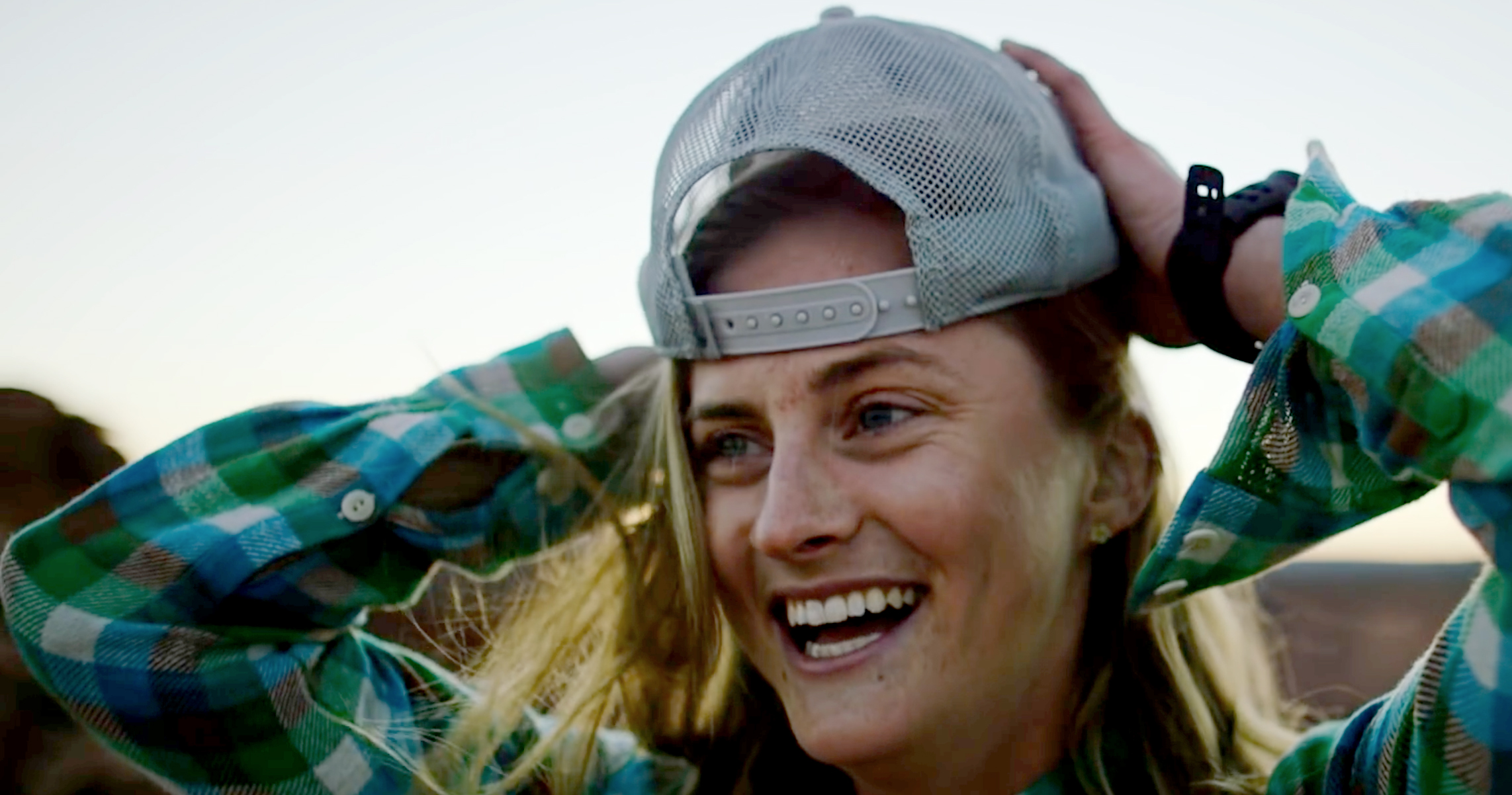 Who Is Clare Gallagher?

Patagonia sponsored athlete Clare Gallagher first wowed the ultrarunning scene by winning the Leadville 100 and putting up the second-fastest women’s time ever. Gallagher also set a course record on the Ultra-Trail du Mont-Blanc CCC and won the Western States 100.

“I don’t really work out other than 10 single-leg backward lunges a few times a week,” Gallagher told us. “I work out most Wednesdays and do longer runs on the weekends, typically. The rest is all runs from my house — classic boring runner shit. Although I don’t find it boring because I’m exploring parts of Boulder I’ve never run through before!”

But if “boring runner shit” is your jam, you can track Gallagher’s runs on Strava. To get an idea, here’s a taste of her weekly running regimen:

Gallagher gave us her “playlist of the moment, ‘freediving.'”

Prince, dedmau5, Nirvana, The Cure, and an eclectic mix of other artists make up Gallagher’s list — which she says relates to the recent “freediving kick” she’s found.

“Its title relates to the fact that I’m on a freediving kick,” she said. “I just read ‘One Breath‘ by Adam Skolnick, which tied with one of my favorite books, ‘Deep‘ by James Nestor. Even though I’m in landlocked Boulder, Colorado, my mind’s reprieve is in the deep ocean where there are still healthy coral reefs.”

Hot on the heels of her win at the Western States 100-mile ultramarathon, Clare Gallagher visited GearJunkie to answer our most burning questions.  Read more… 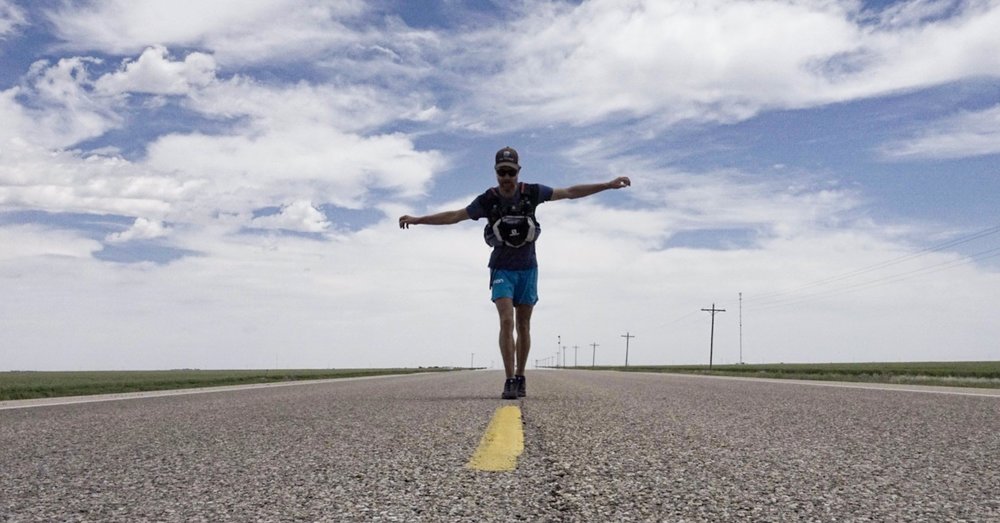 Who Is Rickey Gates?

“I have been chipping away at my #EverySingleStreet project while on quarantine,” Gates said. “The idea is simple: Run, walk, or bike every single street within a given town or city. A year-and-a-half ago, I did this project in San Francisco over 40-ish days, and then parts of Mexico City after that.”

You can see the video here:

“I am now living in a new city, Santa Fe, and had been working on this project intermittently,” he told us. “But now that we are being encouraged to stay close to home, this project has taken on a new meaning. I showcase my own projects and that of a couple others on this website that I put together.”

Here’s how to walk “every single street” in your town, according to Gates:

Regarding his tuneage, Gates said, “I simply let Spotify decide that for me with its Discover Weekly. It’s usually a mix of bluegrass, 1970s afro-pop, and Billie Eilish (just getting into her). If I really need to crank, I’ll find some hip-hop, like pre-MAGA Kanye or Kendrick [Lamar]. Oh, and pretty much anything from Senegal — so trance-y.” 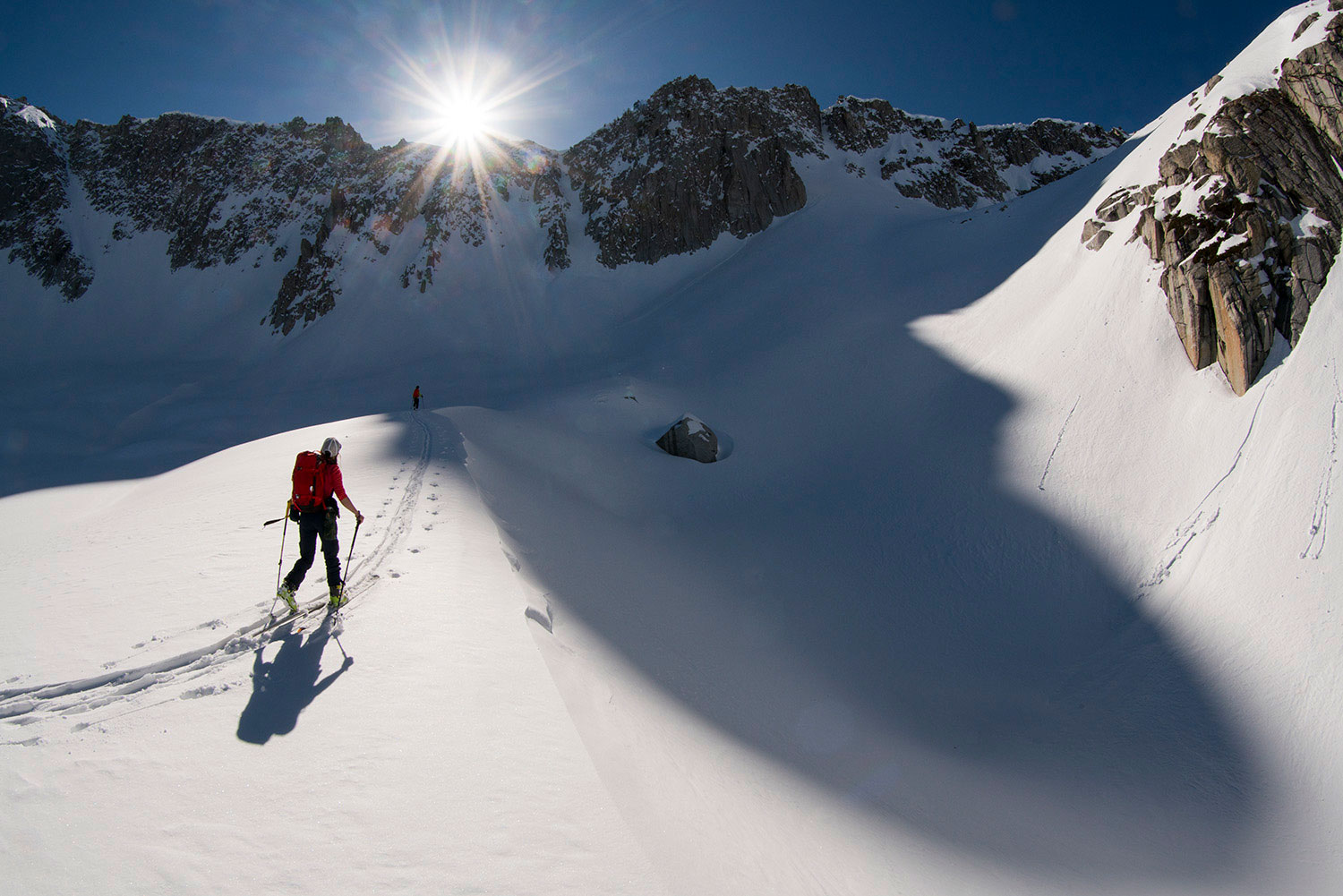 Who Is Caroline Gleich?

Ski mountaineer Carolin Gleich cemented her name in the history books when she became the first woman to ski every line in Andrew McLean’s famed guidebook, “The Chuting Gallery: A Guide to Steep Skiing in the Wasatch Mountains.” She’s also an outspoken advocate for clean air, climate change, gender equity, and more.

Repeat two to three times a few times per week:

Here’s a video of it:

Gleich said, “I also have [a workout] that’s great for a warmup before weight-lifting or just a fun way to get some extra energy out and challenge your coordination.” Check it out:⁣

“For music, I have been listening to my coronavirus playlist on Spotify. (Think The Police, The Beatles, Post Malone, Grateful Dead, Outkast, and Taylor Swift — to name a few.)

“And my new podcast, The Caroline Gleich Show. The episode about climate with Dr. Naomi Oreskes is what I’m most proud of so far. She’s absolutely brilliant, and it’s a message we all need to hear.” 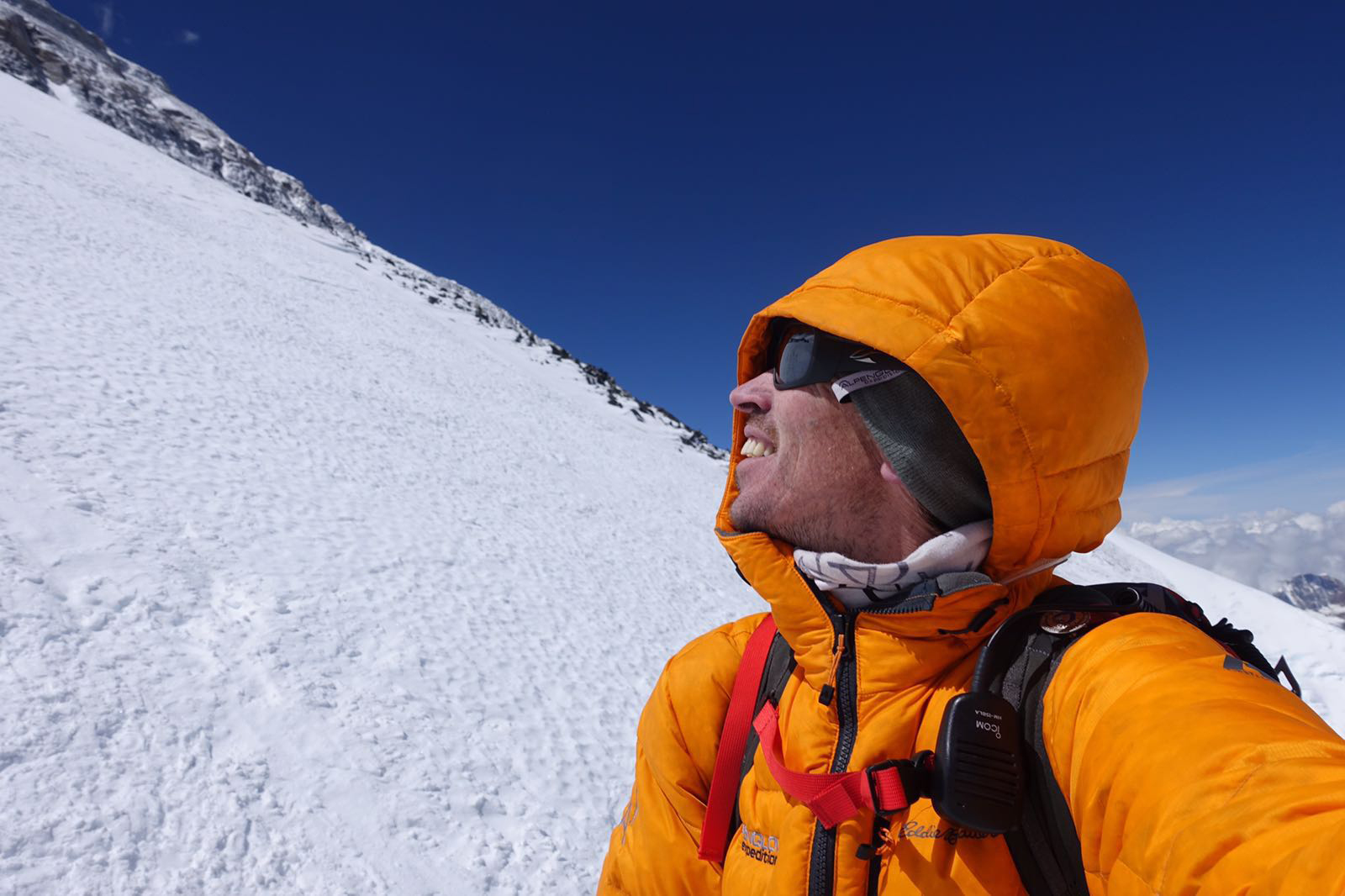 Who Is Adrian Ballinger?

Founder of Mt. Everest guiding company Alpenglow Expeditions, Adrian Ballinger has summited the world’s highest peak seven times — even doing so without the use of supplemental oxygen. Ballinger has also crested several other iconic summits around the globe, including Lhotse, Ama Dablam, and Cho Oyu.

For music that motivates his workouts, Ballinger said, “Flaix FM playlists on Spotify — this is my fave radio station in Catalonia. We listen to it nonstop during climbing trips to Spain. Keeps me motivated here too!”

Who Is Margo Hayes?

Sponsored by The North Face, 22-year-old Margo Hayes has successfully climbed two of the most difficult sport routes in the world. In doing so, she became the first woman to ever send a 5.15a, completing La Rambla in Catalonia, Spain, in 2017.

“During the stay-at-home order, I have been trying to get outside once a day. My routine is very flexible, but it’s important that I move my body regularly. I have been going for long walks around my neighborhood and in open space at less-frequented trails. My distance ranges between 1 and 4 miles, typically.

“I have also been running several days a week. Some days I simply go for a mellow, flat run, and other times I run hills. When I run intervals on hills, it’s an efficient way to get my heart rate up, break a sweat, and get out some built-up energy.

“I have also been climbing a little at a home wall. We make up boulders and we climb circuits for endurance. Basically, I don’t have a set routine, but each day I get out and move!”

Hayes said, “My go-to lately has been Apple Music’s R&B Now! It changes daily, and I like to hear new music that is added!”

From “anthems dedicated to the mean lows of love and the healing highs of marijuana” to “rolling bass and whining synths that sound like the beach and bottled sunshine,” this playlist seems to have a vibe for any activity.

Who Is Ashima Shiraishi?

Widely considered one of the best boulderers and sport climbers in the world, Shiraishi’s accolades become even more staggering when you realize she’s still a teenager. The 19-year-old phenom has consistently topped both U.S. and world bouldering and lead climbing championships.

If that’s not enough, Shiraishi also recently authored a children’s book, “How to Solve a Problem: The Rise (and Falls) of a Rock Climbing Children,” aimed at empowering young girls.

Workout in the yard (three sets each, 2-minute rest between sets):

Wouldn’t ya know it, Shiraishi plays DJ and updates her own workout playlist. Her latest includes Jay-Z, Lancey Faux, Lil Uzi Vert, Lil Tecca, and more. Check it out here. 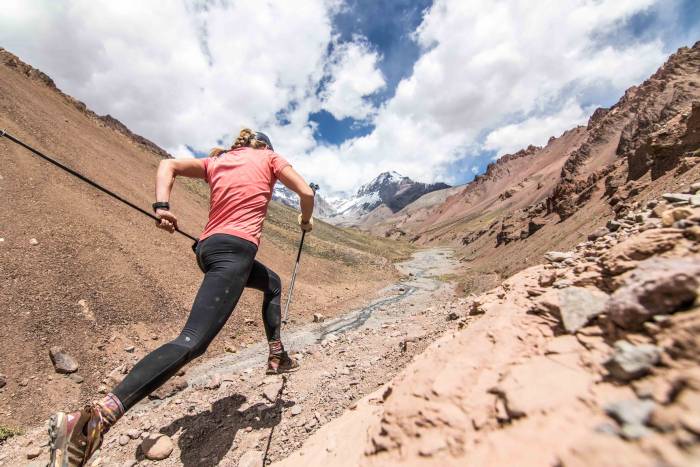 Who Is Sunny Stroeer?

A high-altitude endurance athlete and adventure photographer — not to mention a certified divemaster and first responder — Stroeer set a female speed record on Argentina’s Aconcagua and is the first woman to complete the 100km 360 route and summit in a single push. She also claimed an FKT on the Annapurna Circuit.

“I’m ridiculously lucky in that I moved to the tiny little town of Kanab, Utah, about a month before COVID hit. There are singletrack trails two blocks from my front door, and very few people run or hike on them.

“So my biggest challenge is not that I have to stay indoors, it’s more that I am so incredibly busy trying to keep the wheels on my small business that I have to be really disciplined to continue to train.

“During the crisis, there is so much going on that my focus is not on performance but merely on moving to manage my mood. Some days, that means that I am ambling along at 11-minute miles and even taking walking breaks. Other days, it means that I’m running sub-8-minute miles because I need to blow off steam.

“The big theme for me is to move and to be kind to myself. I want to break down stress, not add to it.”

Stroeer said, “I love indy and alternative rock: KT Tunstall is a favorite, as is the song “She Moves,” and lots of others from that same genre. I’m outdated enough that I still use iTunes and Apple Music, but I do have a playlist on Spotify: ‘Sunny’s Faves.'”

Who Is Rob Krar?

A champion of both Western States 100 and Leadville 100, Krar has won countless 50km and 50-mile ultras. He also launched a running camp specifically targeted at using endurance running to work through depression.

Krar said, “I’ve found I need some accountability and have been doing online Paragon Athletics routines lately. Here’s a fun time-lapse I just posted to my social feeds. Good to show that they can be done at home and with no special equipment.”

Krar does a lot of wall sits, lightweight backbends, lunges, and ab work!