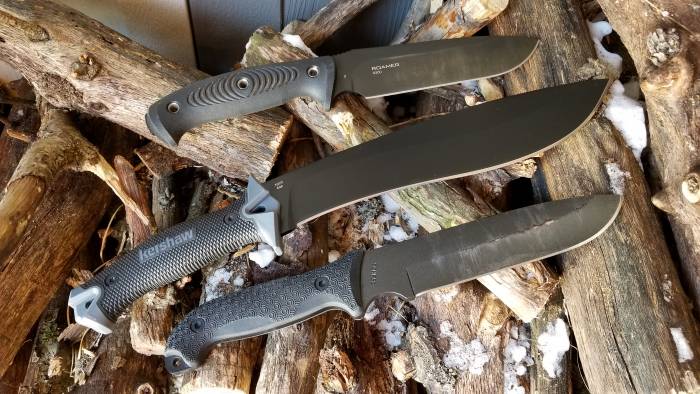 When purchasing outdoor gear, it’s normally best to pay a little extra for high quality. But there are times when it’s acceptable to trade premium fit and finish for the care-free experience of a well-built, basic tool.

Such is the case with the three budget blades you see here: The Kershaw Camp 10, the Steel Will Roamer R300, and the Schrade SCHF52. These are not for thru-hikers or ultralight backpackers. Rather, pick them up for everyday adventures in your backyard, dealing damage to loose limbs and fallen trees.

Low cost, basic materials, and fearsome reach invite you to use and abuse their edges with a casual disregard that would send high-end knife users into panic attacks.

Don’t mind spending a few more bucks? Check out another trio of top chopper knives in the link below.

In order to test this trio, I brought them on a trip to the spring snows of Wisconsin. My father had a pile of tree debris that needed to be broken down, and I offered to lend a hand. He, being a smart man, brought a chainsaw. I brought three knives. Here’s how they fared over a few weeks of testing, capped by an afternoon of yard work. 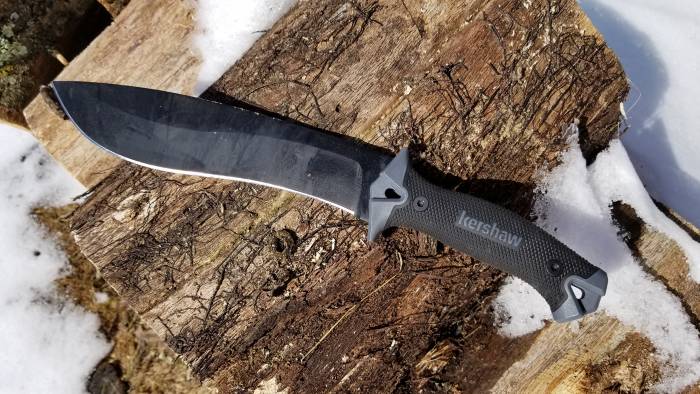 The biggest of this bunch is the Kershaw Camp 10, a 16-inch, one-plus-pound monster of a blade. Its curved, full-tang design is rounded out with a rubber overmold handle and black powder coat over 10 sharpened inches of 65Mn steel.

This Chinese steel is roughly equivalent to the 1095 we’ll discuss with the Schrade. It’s a bit of a softer metal, offering added pliability with slightly reduced edge retention.

This seems like an appropriate choice on a large fixed blade built for chopping. Kershaw sent this to me as a review sample, so I’ve done my best to remain objective. 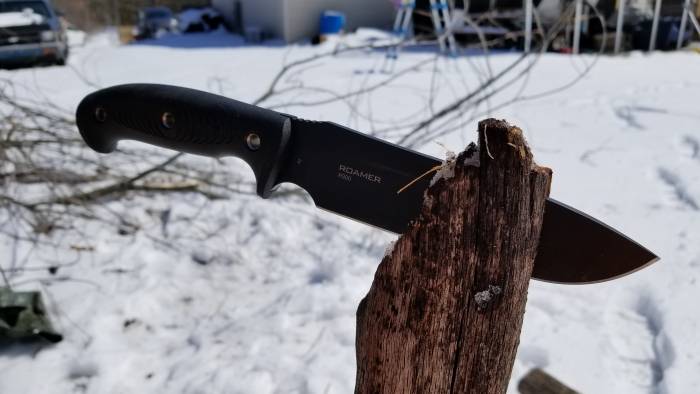 Next comes the Roamer R300, a D2 survival knife from Steel Will. Look familiar? It should, since I tested it for GearJunkie a few months back. At the time, the R300 was the largest blade I’d had the chance to test.

But at just under 1 foot in length, it represents the most compact package in this three-way dance. Its 0.2-inch-thick tool steel blade wears a black powder coat, designed to stave off the ravages of oxidization.

The handle is made of TPE, also found on the Schrade below. It’s grippy, well-made, and wonderfully balanced. Like the Kershaw, this was provided to me for review. 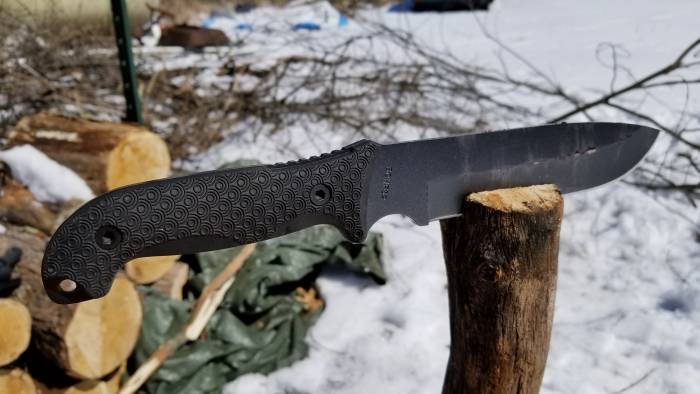 Last up is the SCHF52, one of the larger outdoor offerings from Schrade. This 13-inch, 16-ounce tool is composed of 1095 carbon steel, a proven material for outdoor adventures.

Though not known for its stain resistance, this metal has earned a reputation for toughness and ease of sharpening. Here we find 7 inches of edged 1095 sporting – you guessed it – a black powder coat. The handle, per the specs, is padded with two slabs of “thermoplastic elastomer.”

This must be a fancy way of saying “rubber,” because that’s sure what it feels like. I purchased this knife through Amazon for the as-advertised price of around $30. 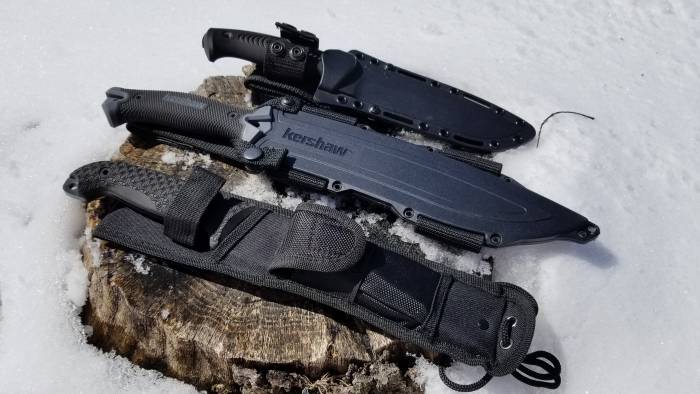 Let’s take a few moments to consider the trio’s various methods of carry. The best of these by far is the Steel Will’s hardened nylon sheath. Ride, blade retention, and adaptability are excellent, making this my pick of the litter.

The Kershaw, conversely, is the worst of the bunch. Despite its decent materials and multi-mount capability, the fit simply isn’t great. The blade rattles against the plastic, and the retention snap is awkward at best.

Given the weight of the Camp 10, I’d like to see something stronger than one polyester band holding this monster in place. It’s not a disaster, but this isn’t the sort of sheath I’d want at my side for an extended stretch of time.

Somewhere in the middle is the polyester sheath for the Schrade. As the lone fabric model, it has a slightly cheaper feel. There is a plastic insert for the blade itself, with enough wiggle room for the SCHF52 to rattle slightly.

But the fabric button clasp is a marked improvement over the hilt-loop on the Kershaw, resulting in solid retention overall. The Velcro on the pouch and belt loop are strong, though I’m still not a fan of that particular material when it comes to longevity. Still, it provides a comfortable and relatively secure ride – and for half the price of the Steel Will.

Back to the pouch for a second. Schrade has included a sharpener and fire steel, bolstering its “survival” cred. There’s also a bootlace-like loop for your leg if you feel like looking silly around the yard. Despite this somewhat comical inclusion, it really does help keep this heavy blade from slapping against your side.

Let’s cover the common ground before diving into the differences between these three blades. First, each offers a full-tang design with a hooked parrot’s-beak near the end of their respective handles.

All three feature strong tips and thick spines, though none are particularly good at scraping a firesteel. Two of the three – The SCHF52 and the Roamer – include a forward finger choil, which assists when choking up for more delicate work. 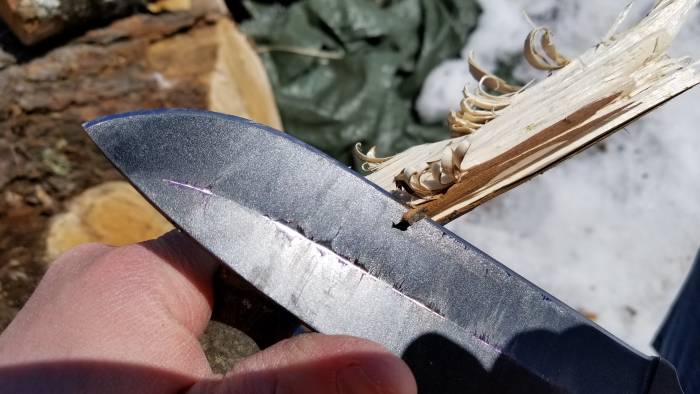 Beyond these similarities, these are very different blades. The Kershaw, for instance, took a while to grow on me. Chopping at small firewood and pre-cut logs, I found it to be somewhat awkward. But then I went for a walk in the woods, where I discovered the Camp 10’s role as a brush-clearing beast.

Its reach and weight make it perfectly suited for hacking away dead branches or culling stubborn brush from your path. When I came across a fallen arm-thick tree, the temptation to test the Camp’s striking ability was too much to resist. 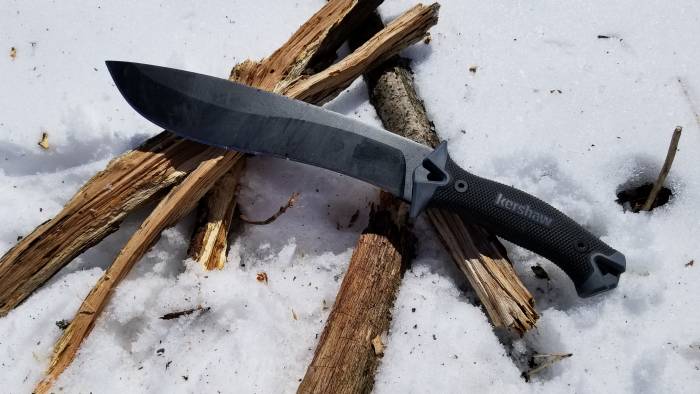 The Schrade, on the other hand, is a little more refined. Or, as refined as a $30 piece of 1095 can be. While it may not have quite the heft of the Kershaw, its hollow grind bites deep into all but the hardest wood. It’s still heavy enough to get decent force behind a swing, while far surpassing the Camp 10 with carving and detail work.

Its exposed tang will transmit a bit more shock to the hand, but you should really be wearing gloves for these sorts of tasks, anyway. This is especially true around the upper jimping, which can nibble at the meat of your thumb. Still, this knife is a joy to use. The finger choil and parrot’s beak bracket the grip area nicely, allowing for a variety of ways to wield. The SCHF52 is a solid, sensible tool.

With the Roamer, however, we enter a strange space. It lacks the reach and weight of the others while offering the best edge retention and sheath. As you’ll see in its standalone review, it’s a capable cutter with enough strength for light chopping and batoning. Its excellent handle and finger choil provide the best tactile interface of the bunch, and it’s the most comfortable on the belt.

Yet, I can’t help but feel that the R300 is a bit out of its league here. The Schrade and Kershaw are capable of tackling much larger tasks thanks to their extra inches of steel. And though $68 isn’t crazy expensive, it’s still about as much as the combined price of the others. 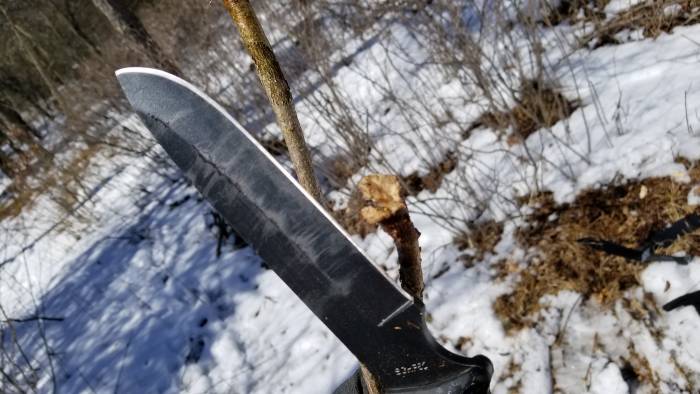 Do you have a pile of tree trash waiting to be processed? Then the Kershaw Camp 10 is the tool for you. It splits through limbs, logs, and shrubbery like no other knife I’ve ever used. The heft of the blade pairs perfectly with the bulbous curve of its edge, providing a natural striking point.

This was also my first experience with 65Mn steel, and I have to say I’m impressed. Even after exposure to snow, mud, and several direct strikes into dirt, the cutting surface looks nearly as good as when it first slid from the sheath.

The high bevel lends substantial strength to the edge, adding to that afforded by the thickness of the blade stock. Even the black powdercoat has held up admirably. Despite its worst-in-show sheath, the Camp 10 is worth every penny of its $40 price. If you’re strictly seeking a cheap chopper, look no further.

Yet, if I had to pick just one blade from this trio, the Camp 10 would fall by the wayside. Its specialized blade is great for wailing on wood, but it’s somewhat limited when it comes to general cutting tasks.

There’s also the matter of sharpening, which can be tricky on edges with this sort of kukri curve. This, plus the iffy sheath retention, will have me looking elsewhere.

The Steel Will, conversely, feels a bit small when compared to the other knives. It’s also significantly more expensive, dampening my willingness to push it to the limit.

Though its sheath and edge retention may be the best in the bunch, it doesn’t strike with the same authority of the others. The Roamer is a fine knife, but it’s not the kind of disposable damage-dealer I set out to find.

That leaves the SCHF52. Between its solid heft, reliable steel, and outstanding cutting edge, Schrade has conjured up a very balanced beast. It’s a thick, durable chunk of “can do,” completing every task I assigned to it. It’s also the cheapest of the bunch despite coming with a sharpener and fire steel.

If you’re in the market for a budget chopper, I’d highly recommend the SCHF52. Of the three blades tested here, it’s the most versatile, the easiest to sharpen, and (thanks to its low price) the most accessible.

Now, who else needs help clearing out their yard?

Up Next: Do More With Less? Meet Combar, the 5-in-1 Multitool