Meet the T.M. Hunt M18, the biggest, baddest, most capable chopper I have ever used. 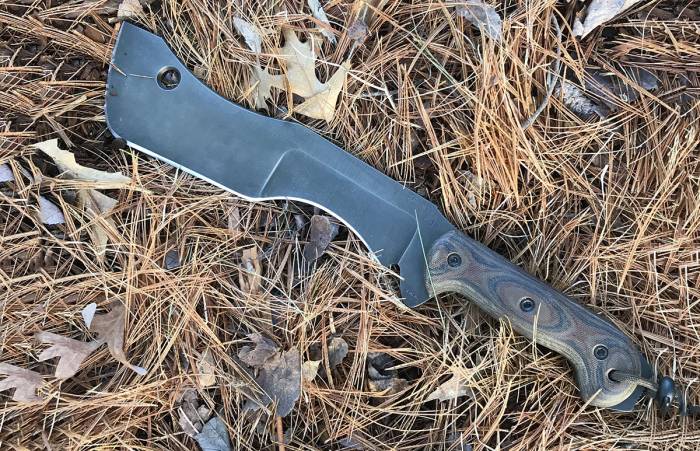 A “chopper knife” is a fixed blade that can be used for ultra-hard tasks. In some cases, it replaces hatchets and small axes. This trend has resulted in large, thick blades. Think Crocodile Dundee in the attempted mugging scene.

But the evolution of the chopper has reached a new stage with the T.M. Hunt M18. Here it is below, next to the mid-sized Bark River Bravo 1 LT, a great knife capable of a lot of difficult tasks. Yep, the T.M. Hunt is huge!

Right away, note this knife is semi-custom and costs a fortune at $490. But in some circles, it’s worth every penny. 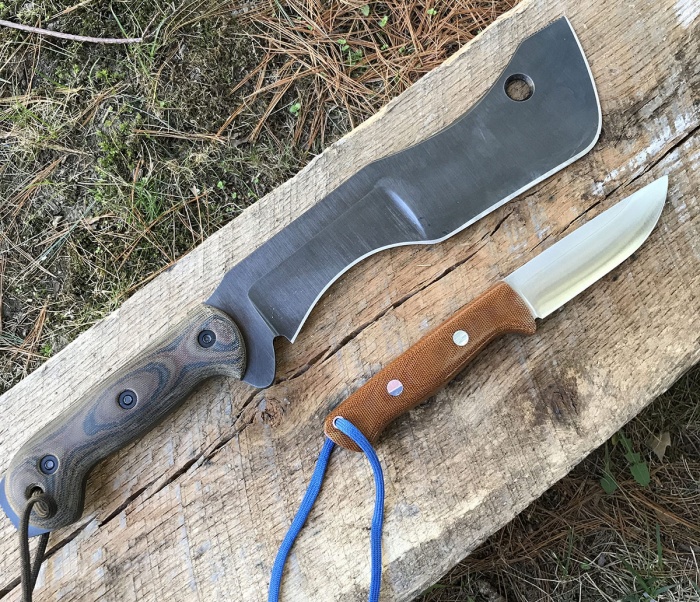 The unusual blade shape is actually the secret to the M18’s performance. It can pry, chop, chisel-cut, and scrape easily. The curved portion near the handle is a capable draw knife (a.k.a. “spokeshave” in woodworking). 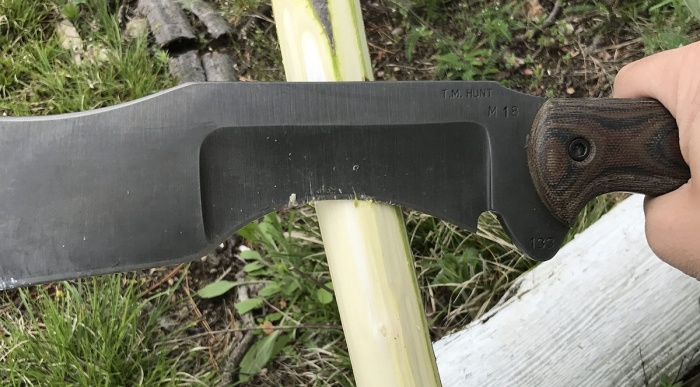 The spine of the knife can be used as a striker for flint, a handle for the spokeshave, and a landing spot for a baton when splitting wood.

But that is not all that gives the M18 its versatility. The lanyard allows you to fasten it to your forearm for detail work. The exposed rear tang allows for push cuts and hammering. The amazing handle, derived from the Ethan Becker handle seen on his line of KA-BAR knives, gives you positive retention in any grip. 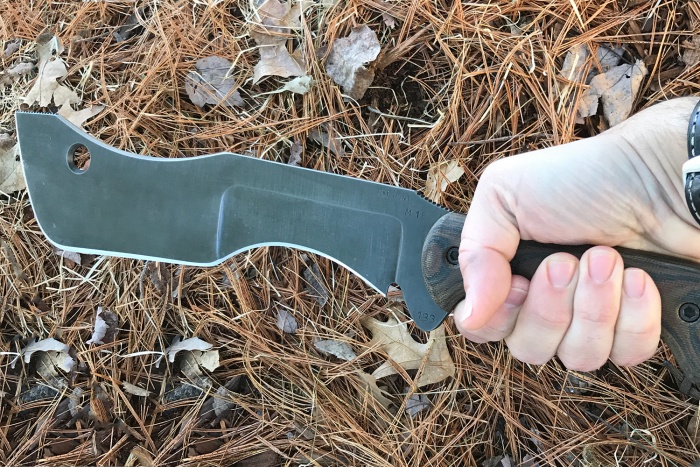 The stock sheath, a lift-out as opposed to a pull-out, works well and helps hide the edge.

Finally, the M18 has T.M. Hunt’s proprietary O1 heat treat. O1 is an old, venerable, high-carbon steel. As processed by T.M. Hunt, it holds an edge longer and is tougher than it should be given its chemistry.

This is a full custom knife, and the price reflects it. The M18 comes in at around $490. That’s a ton of money for a knife. But this is a chopper that can also do detail work, a chisel that can be an axe, and a spokeshave that can separate deer hips.

This is the next evolution of a big chopper, and it is one hell of a knife. Even if you have no real use for a blade this big, it’s amazingly fun to play with, chopping wrist-thick saplings in a single stroke.

If you can, you absolutely owe it to yourself to TRY IT. Given its size, I can’t universally recommend the M18. But if you need a chopper, this is the one to buy.

Up Next: How to Sharpen Your Knife on a Whetstone