Minneapolis Greenway bike and pedestrian commuters will face a new form of traffic during one weekend in April: a self-driving shuttle.

Some call it Minneapolis’s bike highway. The Greenway spans 5.5 miles in the bustling metro, providing cyclists a reprieve from car traffic. It links a magnificent network of bike- and pedestrian-only pathways that provide quick, clean, safe transit.

And this bike highway will soon have a new occupant, the 100 percent electric EasyMile.

During Earth Day weekend, April 20–22, Hennepin County will test a driverless electric-powered shuttle, the EasyMile, on a two- to three-block stretch of the Greenway.

The test has a $50,000 budget and aims see how this technology can complement established forms of transportation and enhance connections of major transitways. 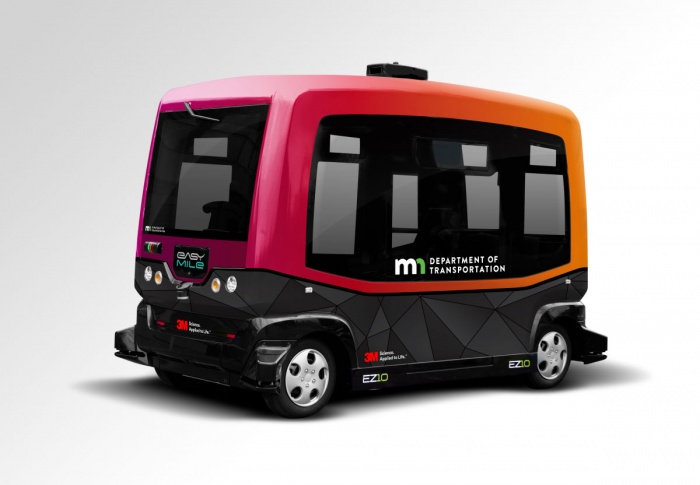 The Minneapolis Department of Transportation tested a self-driving shuttle for the past several months on closed roads. It even put the autonomous shuttle into practice, offering free rides in the lead up to the Super Bowl with trips up and down Nicollet Mall.

The EasyMile can operate safely in mixed bicycle and pedestrian traffic, the brand claims. It fits up to 12 passengers and will not exceed 12 mph – although Hennepin County notes the specific model, the EZ10, can operate up to 25 mph.

On the Greenway, the EasyMile will operate on one of the bike lane directions in mixed bike and pedestrian traffic. The route will be pre-mapped.

Currently implemented in 20 countries, the EZ10 has logged more than 75,000 miles with 230,000 passengers without a single major safety incident. During the Earth Day test, the shuttle will have a human operator on hand to take over if needed.

This isn’t the first time electric transport has been considered on the Greenway. In 2012, the Minneapolis Greenway Coalition, a nonprofit advocacy group for the Greenway, projected a streetcar system.

The Greenway currently serves as a major commuting path for the city’s numerous cyclists. A two-way cycling path and separate pedestrian path occupy the length of the Greenway. A large portion of it is currently underutilized and closed off from the paths by a fence. It gives access for emergency response vehicles such as police cars.

The Minneapolis Greenway Coalition sought to take advantage of this underutilized, fenced-off portion of the Greenway with a streetcar system.

Different than a shuttle, the streetcar would travel over rails with space for turf to grow. It would exist without retaining walls or overhead cables.

“Shuttles would likely be quieter and have less impact than a streetcar, though a streetcar would move more people,” said Soren Jensen, director of the Minneapolis Greenway Coalition. “There is no streetcar currently on track for installation in the Greenway.  It remains a possibility, though some people would say the odds are long.”

Designed to result in the greatest number of transit riders, the project concluded with installing both a rapid bus on Lake Street and a rail in the Greenway.

Bikes and Shuttles: Can They Mix?

Cyclists and pedestrians, expect to dart around a new visitor during April. And if the test is successful, further involvement with the EasyMile on the Greenway may be in order.

“We pretty much always support improvements to public transportation,” remarks Jensen. “Better it be an autonomous shuttle to the Light Rail or Rapid Bus than driving their cars, right?”