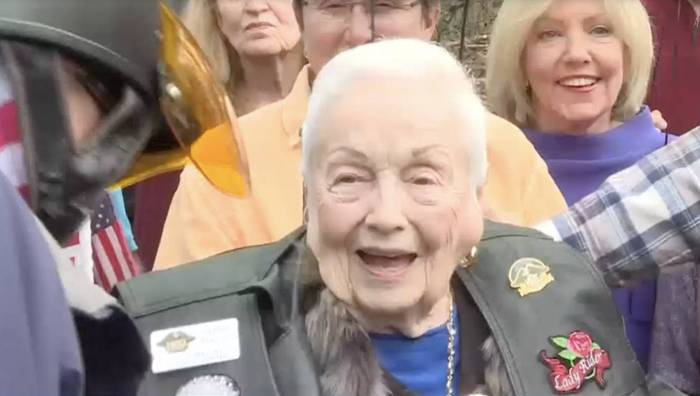 105-year-old Helen Akard gets back in the saddle; (screenshot/WVLT)

The last time Helen Akard rode a motorcycle, World War II had not yet started. But the centenarian hopped back in the saddle on her recent birthday and loved every minute of it.

On Friday afternoon, Dec. 30, a motorcycle engine rumbled to life in Knoxville, Tenn. Then, a white-haired woman with a bike cut and wearing black clothing sidled over to it, climbed on board, and went on her first ride in eight decades.

When 105-year-old Akard last pulled back a motorcycle throttle, the United States was still climbing out of the Great Depression. The first air-conditioned car had not yet hit the showroom floor. And the advent of nylon stockings for women was right around the corner.

But it’s easy to imagine some of that was the last thing on this young woman’s mind. Knoxville’s WVLT 8 news station shared a dashing photo from her youth, showing Akard seated on a bike with her uniform cap tilted at a rakish angle.

In her 20s, the station reported, Akard rode “avidly” because she “liked how it felt, going fast, and feeling the wind.”

Finally, Akard felt it all again on her 105th birthday. A biker group from East Tennessee broke the hiatus and surprised her, WVLT said.

By all indications, she welcomed the gift.

“Well, I just want to say I’ve had just about the nicest birthday I’ve ever had,” Akard told WVLT after her ride.

Understandably, Akard did not get behind the controls to operate the motorcycle — but she did at least briefly take the saddle and handle the bars. Watching her do it, you’d think she never stopped riding in her long life.

Akard retired from her career as a loan officer at the impressive age of 93, WVLT reported, and now she hopes to ride more often as she endeavors to outlive her mother — who lived to be 108.

“A lot of people say I’m crazy, but they don’t know what they’re missing,” Akard said. 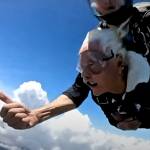