In an effort to breathe some new life — and sales — into the funky CUV, the 2022 Mitsubishi Eclipse Cross gets some significant improvements.

In 2018, Mitsubishi resurrected one of its most iconic nameplates: Eclipse. Well, sorta. The name was actually Eclipse Cross, and rather than a sporty compact coupe, it was a controversially styled crossover.

Nostalgia is a powerful drug, and some people lost their minds after Mitsubishi used the Eclipse name on a crossover. Granted, those are mostly people who owned an Eclipse 25+ years ago and/or people who had no intention of buying a crossover in the first place. Can the 2022 Mitsubishi Eclipse Cross win them over? 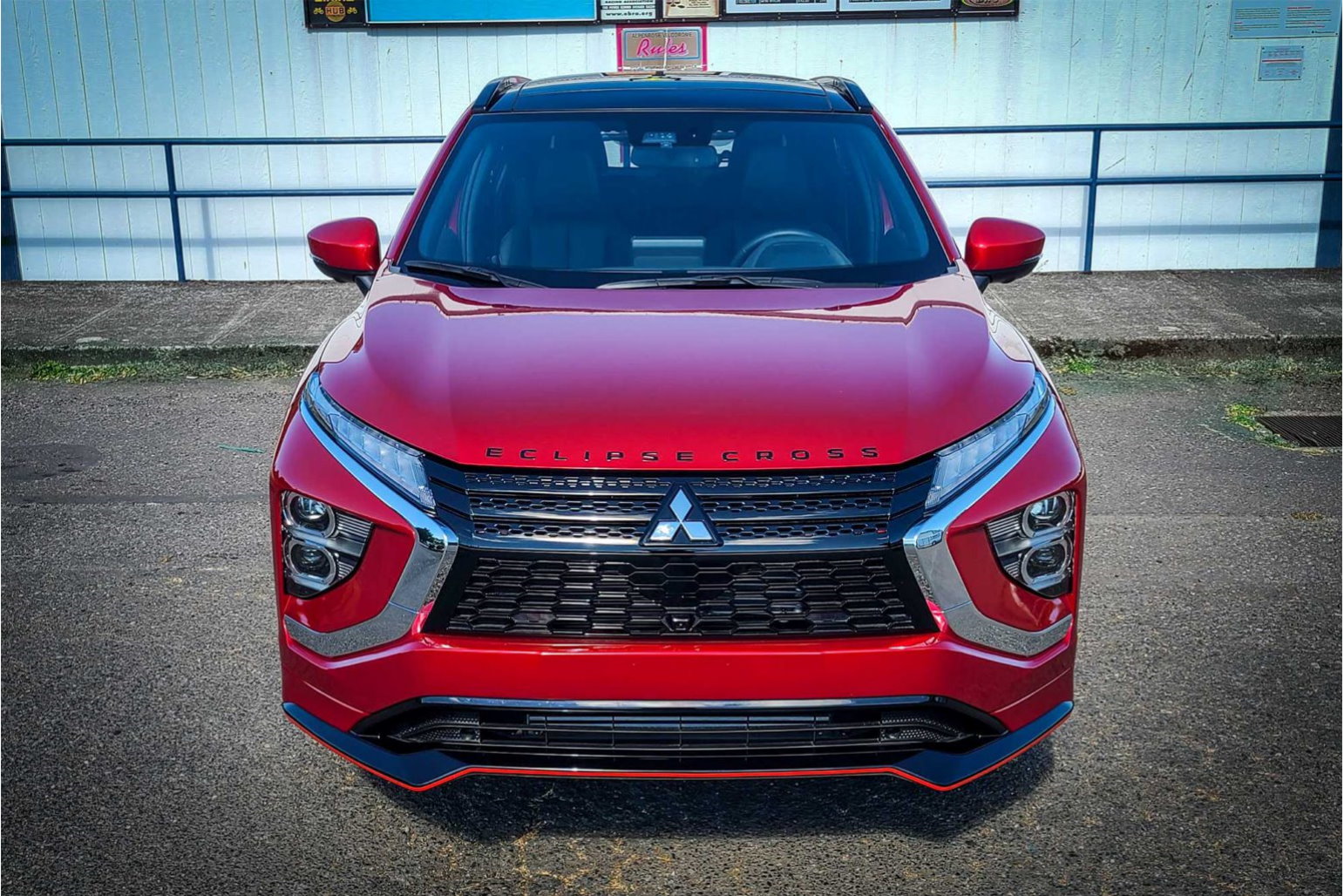 For 2022, the new freshened-up and improved 2022 Mitsubishi Eclipse Cross sports a revised front bumper, further incorporating the company’s Dynamic Shield corporate styling language. The looks are certainly different. I happen to like the edgy, dramatic style.

However, the most notable overall change from the first iteration is at the rear end, specifically, the hatchback’s rear glass. The 2018-2021 models had a unique rear hatchback with split window panes that some thought harkened back to the Pontiac Aztek. The Aztek was, of course, widely considered to be the greatest automotive styling abomination since the Edsel.

Anyway, the 2022 Mitsubishi Eclipse Cross features a more traditional rear windscreen, which also happens to add a cubic foot of interior storage and 5 overall inches to the car’s length.

Mainstream styling and increased cargo capacity and length? What more could a crossover buyer want? 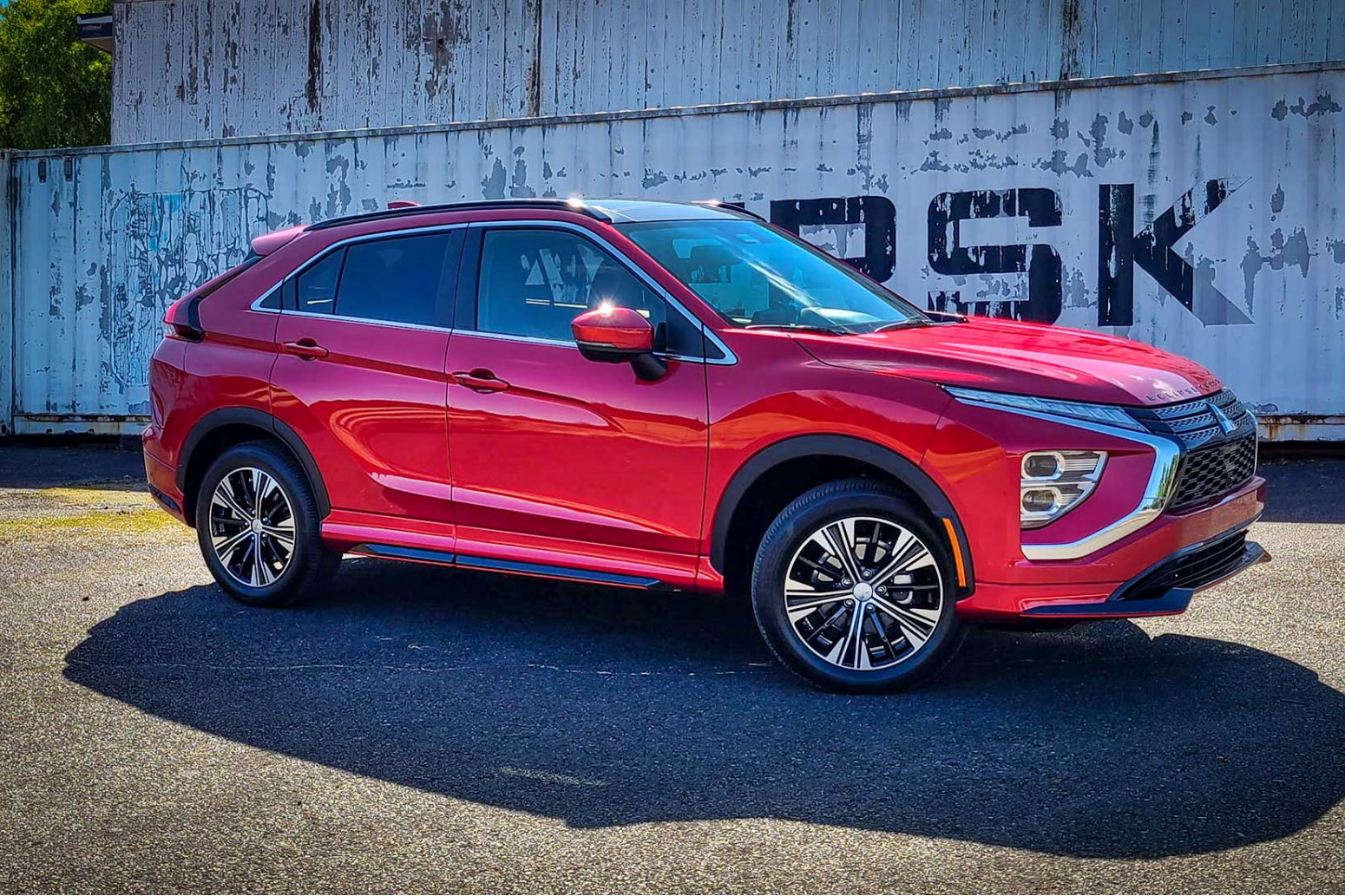 My test model was a top-of-the-line SEL with the Touring Package. This included body-colored front and rear bumpers. It also had the SEL Touring Exterior package, giving it black front and rear corner extensions. This combination leads to the best-looking Eclipse Cross iteration, in my opinion.

Mine was also wearing what could be, arguably, the best shade of crimson currently available on the automotive market: Red Diamond. This is an optional $595 paint job, but, holy cats, is it worth it. This color is truly stunning.

Overall, the sum of the parts means the new Eclipse Cross is edgy, sporty, and unique without being Aztek-weird. Some of the lines get a bit busy, but overall, it adds to the car’s character. 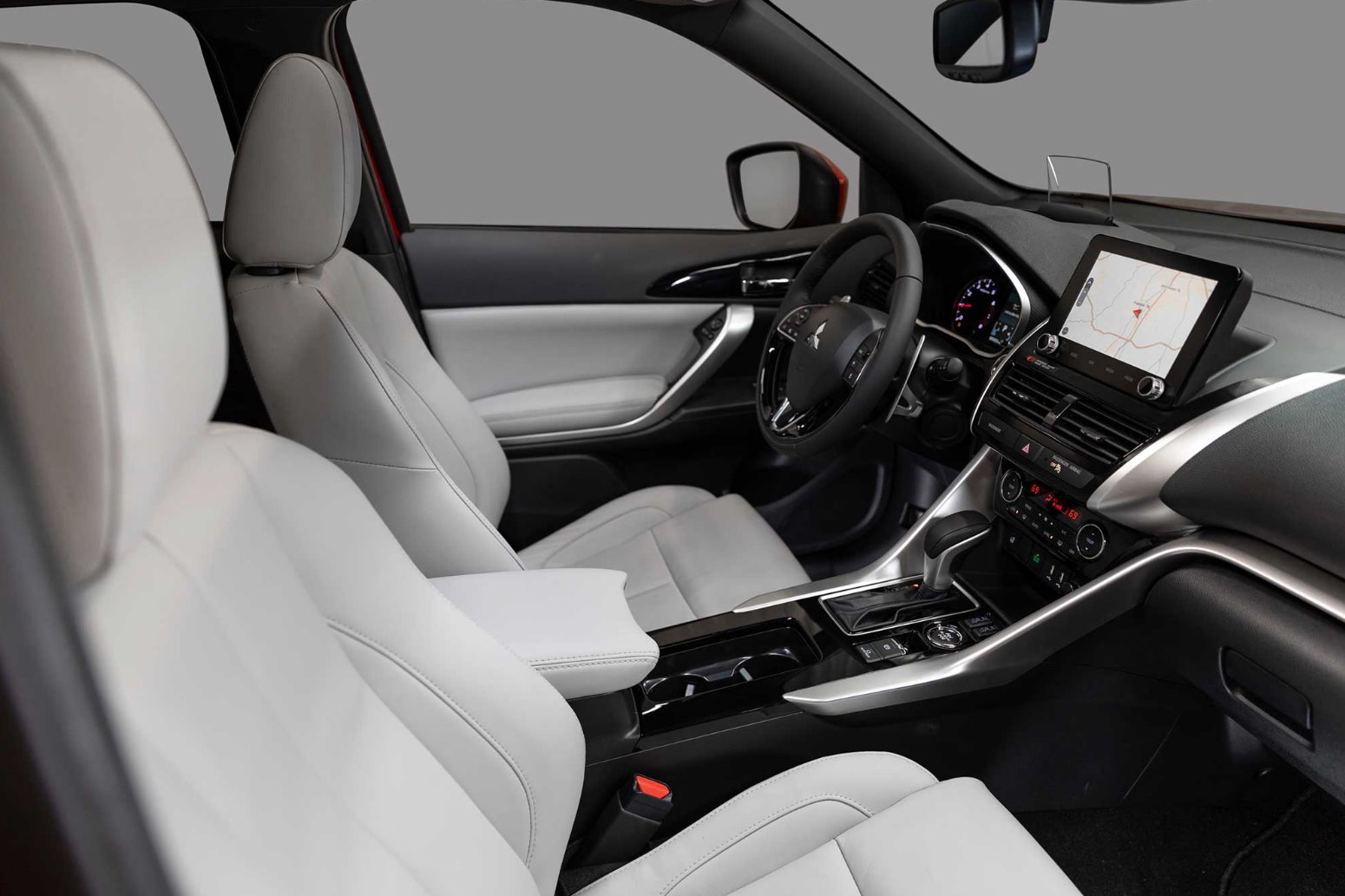 It isn’t just the Eclipse Cross’s exterior that got refreshed. The interior gets updates too, including a power driver’s seat option, new upholstery, heated steering wheel (standard on the SEL), heated front seats, and heated rears.

The front seats mated comfort and support and really felt like they fit my body exceptionally well. They were sporty enough to hold me in place but comfortable enough not to fatigue my body on longer drives. The driving position also felt spot-on — one of the best I’ve experienced recently.

Most amenities felt like they were placed where they should be, and I never felt like I had to reach for what I needed. Visibility was also good.

The Eclipse Cross continues to have a heads-up display that was also easily retracted into the dash if I didn’t want to see it. Instrumentation was also simple and easy to read.

My tester had a front power sunroof as well as a rear fixed glass roof. Most amenities were easy to use, which I appreciated.

Overall, the space felt good for a crossover of this size. The rear cargo area was abundant. I was expecting a power rear liftgate, which is not available. Yes, you actually have to open and close that rear gate by hand. Oh, the humanity! 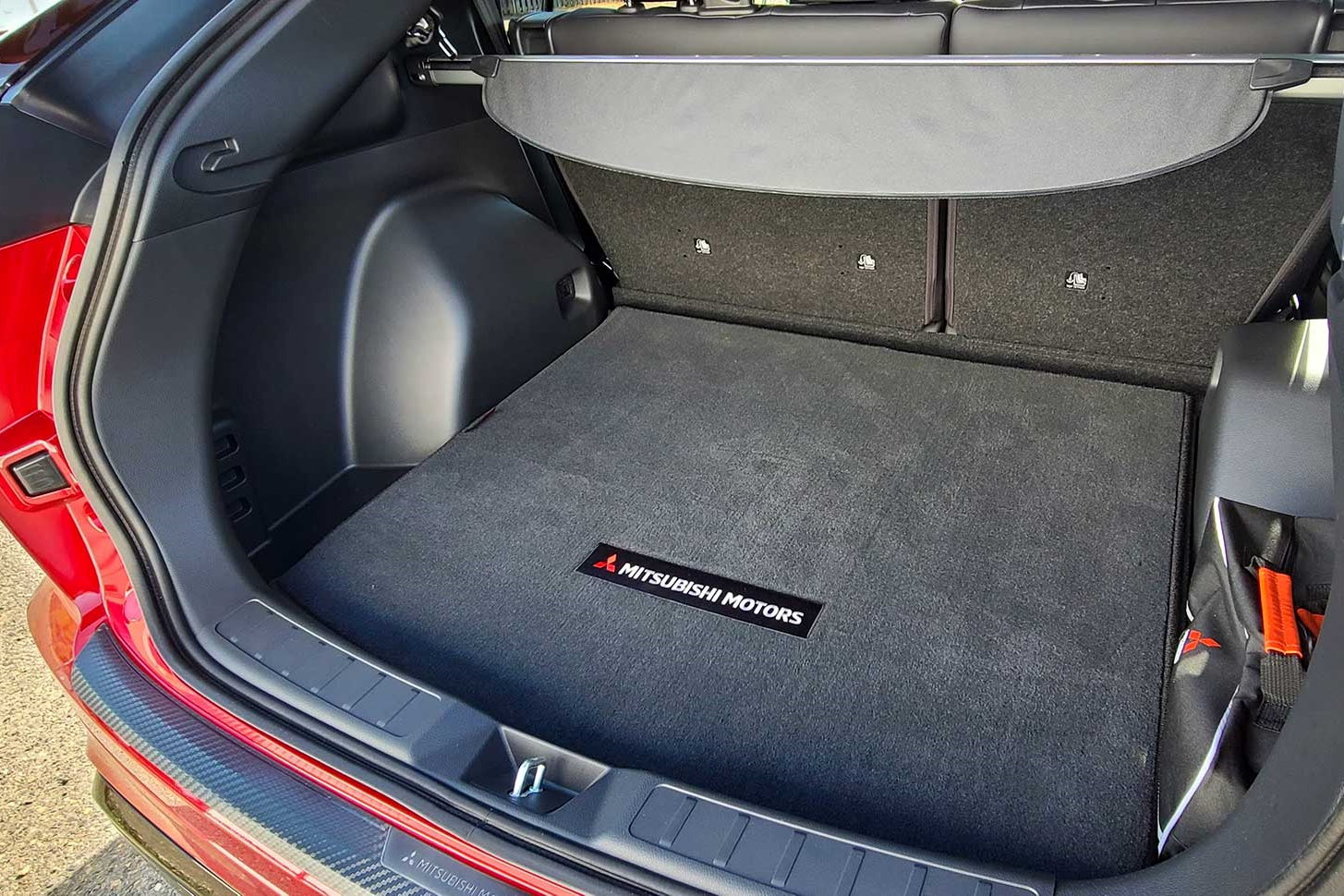 Of importance, the 2022 Mitsubishi Eclipse Cross gets updated infotainment. The touchscreen has been moved 2 inches closer for easier operation. Thankfully, Mitsubishi has returned to knobs for certain infotainment controls and ditched the center-console-mounted touchpad control.

While this was a valiant effort, it never really worked that well. I’ll almost always take traditional knobs over 100% touchscreen or touchpad operation. In other news, I’m probably a curmudgeon and will start yelling at kids to get off my lawn.

An onboard navigation system with industry-first embedded what3words integration is now standard on Eclipse Cross SE and SEL, the first time Eclipse Cross has been fitted with embedded navigation. As a global addressing system, what3words divides the world into a grid of 3m by 3m squares, each of which is assigned a unique what3words address.

The system allows pinpoint navigation, even in remote, unpopulated areas, offering greater accuracy and specificity than street address-based systems. The 2022 Eclipse Cross is actually the first production vehicle to be offered with what3words embedded directly into its navigation system.

I found the 2022 Mitsubishi Eclipse Cross’s interior revisions to be welcome. It’s a good place to spend time — comfortable, sporty, and versatile with plenty of storage and space. Most parts felt solid and well built. Some of the switchgear, such as the turn signal stalks, felt cheap, however. But overall? It’s pretty solid. 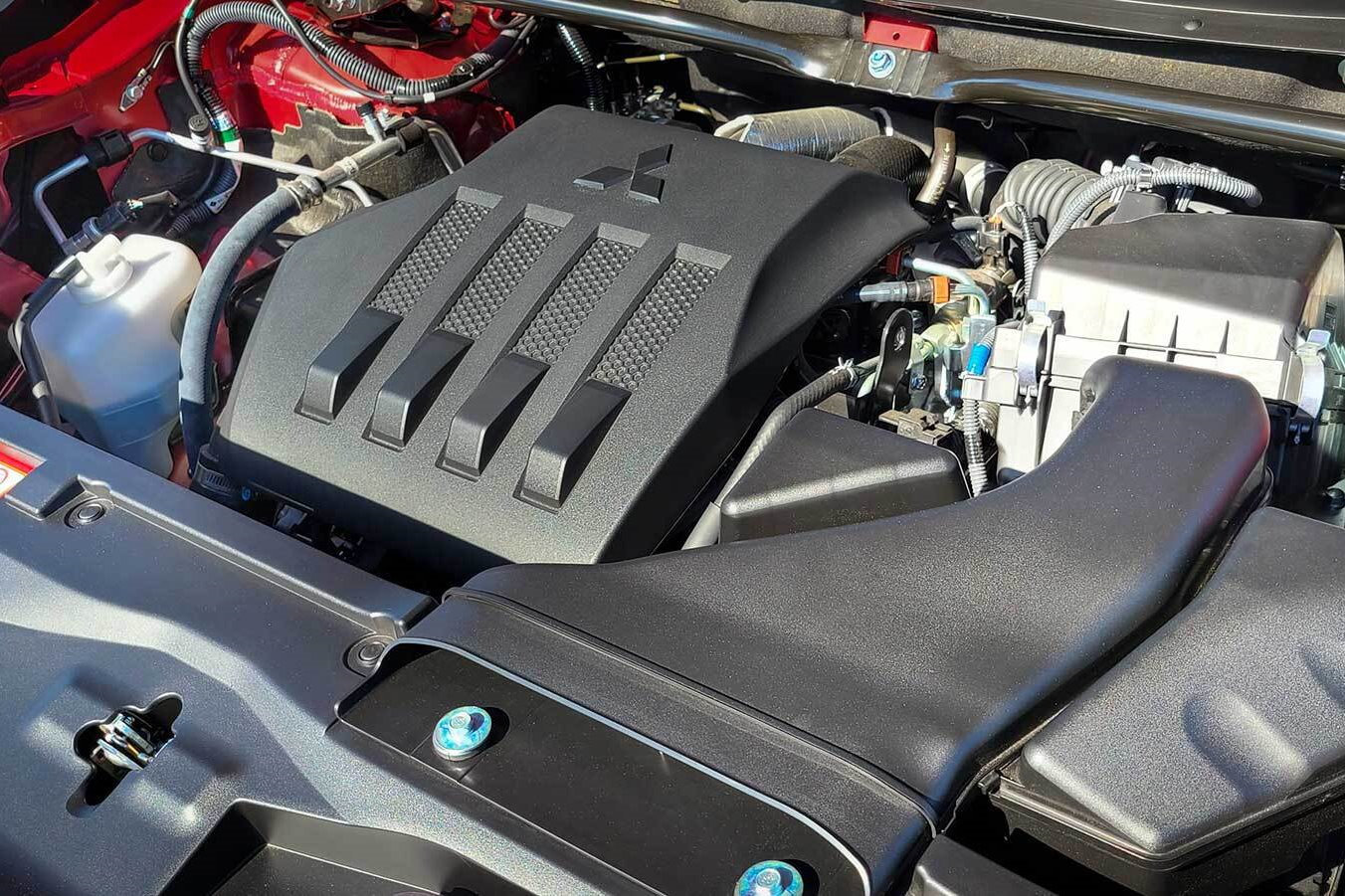 The 2022 Mitsubishi Eclipse Cross continues to offer one powertrain: the turbocharged, intercooled, direct-injected 1.5L 4B40 MIVEC four-cylinder, which makes 152 horsepower and 184 pound-feet of torque. Peak horsepower is at 5,500 rpm, while torque comes on at 2,000-3,500 rpm.

This AWD Eclipse Cross felt adequate in the acceleration department, but not more. The crossover’s only transmission choice is a CVT. It does have steering-wheel-mounted paddle shifters, however, if you want to pretend to shift gears.

So what it lacks in power, it makes up for in fuel economy, right? Not so much. The Eclipse Cross is EPA rated at 25 mpg city, 25 highway, and 26 combined — unimpressive. FYI, that’s lower than both the Escape and RAV4 — even though they all have more power. It does best the turbocharged Kia Sportage. 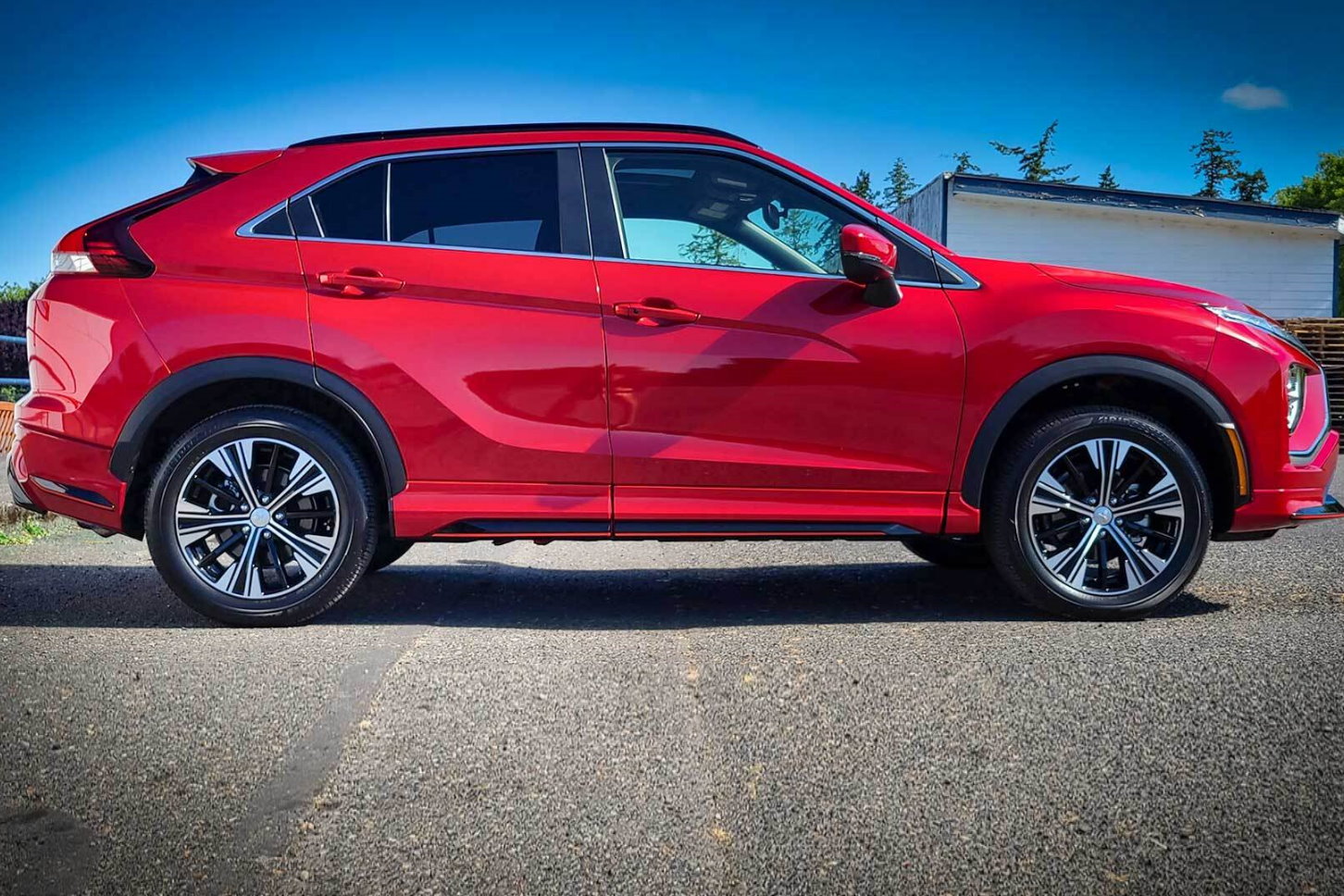 Mitsubishi also revised the 2022 Eclipse Cross’s suspension. When I drove the 2018 model, the car drove larger and heavier than it was. A lot of that has been remedied with this ’22 refresh.

The shocks have been retuned, and the rear end has been stiffened up. Combine this with the multimode S-AWC (Super-All Wheel Control) which mates all-wheel drive with active yaw control and antilock brakes and active skid control, and the Eclipse Cross feels surefooted. It’s perhaps still one step away from being tossable in the corners, but the improvements do make it feel better than previous models.

Grip is not a problem, as the car comes with 225/55R18 tires mounted on moderately hideous-looking wheels. Sorry, I’m not a fan of these rollers. If I were to buy this car, the first thing I’d do would be to either blackout these wheels or get some aftermarket units.

Note: the LE models come with blacked-out wheels. Maybe you could get the dealer to put them on instead.

I took the car on a familiar backroads jaunt and paddle-shifted my own gears through some twists and curves in a sporting fashion. The paddles weren’t terrible for selecting gears, and there wasn’t too much shifting lag. I kept thinking how much more entertaining this car could be with another 50 horsepower and perhaps a twin-clutch transmission — or a real manual, but that’s crazy talk.

The CVT whined and whirred during spirited driving. I kept thinking: Is this thing going to overheat or do something bad? Thankfully, it never did. After all, the Eclipse Cross isn’t intended to be driven like, well, the original Eclipse coupe.

But it wouldn’t take too much for the engineers at Mitsubishi to make this vehicle more entertaining. They say Mitsubishi’s Ralliart performance brand is coming. Perhaps they can breathe some more sportiness into this car to transform it from a sporty-looking crossover to an equally sporty-driving one. Maybe a Ralliart Eclipse Cross could be a Hyundai Kona N fighter?

You do get a lot of features, a comfortable cabin, and one of the best warranties in the business: 10 years/100,000 miles on the powertrain and 5 years/60,000 miles bumper-to-bumper. 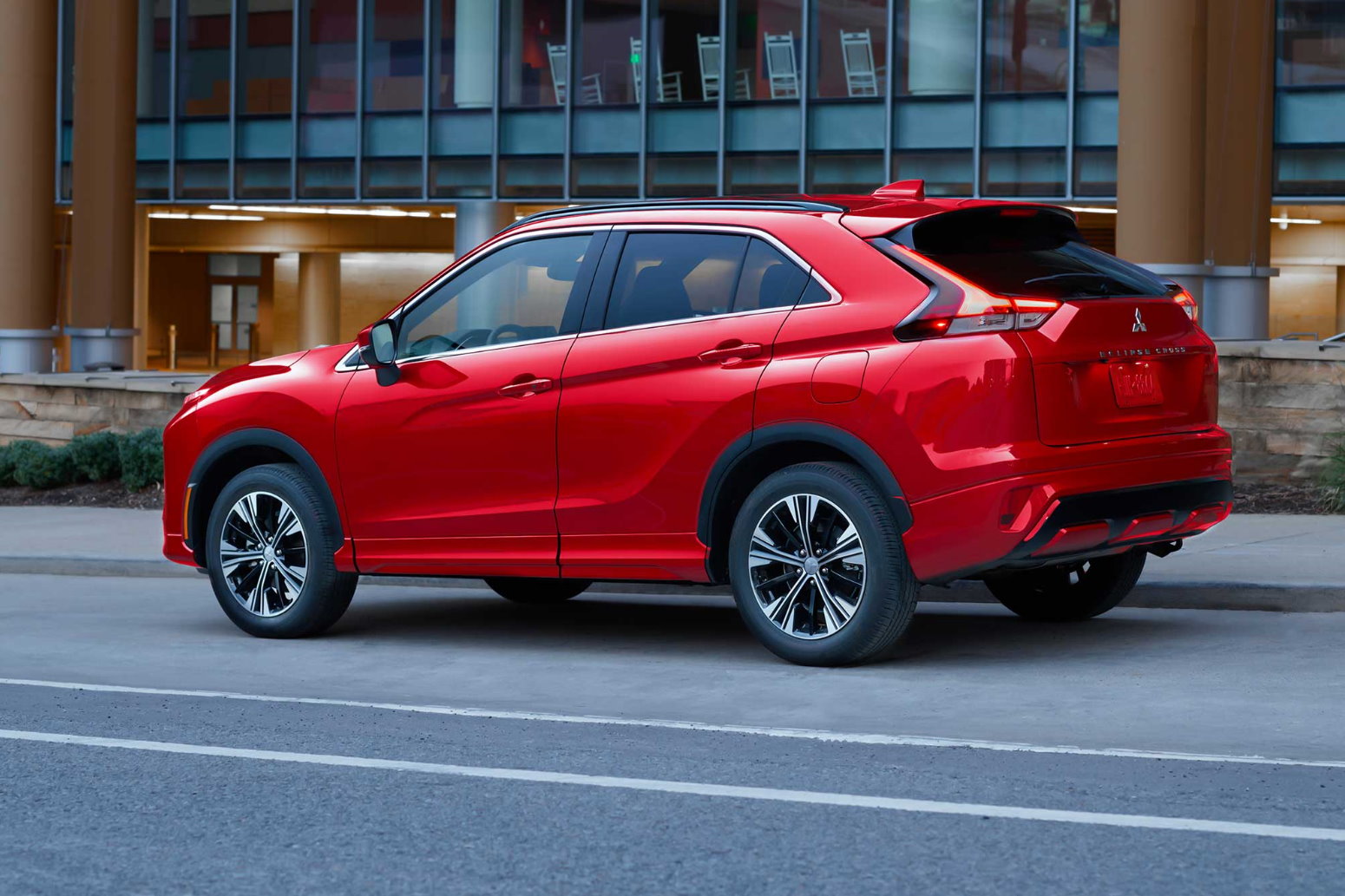 There was something appealing about the 2022 Mitsubishi Eclipse Cross for me. Maybe it’s the Mitsubishi underdog status. Maybe it’s the out-of-the-ordinary styling. Perhaps it was because the interior fit me like a second skin. It might not be the fastest, but the car does have personality.

For Mitsubishi to really have a class leader, however, they need to make this thing more powerful or more efficient. While other parts of the world get a PHEV Eclipse Cross, North America likely isn’t going to get it, which is a shame. Apparently, PHEV status is reserved for only the Outlander here.

Mitsubishi as an automaker is undergoing a transformation as it begins to integrate with its alliance partner, Nissan. Sales are up and more dealers are opening.

The Eclipse Cross’s first iteration went largely unnoticed. The revised ‘22 Eclipse Cross is improved compared to this model, but I don’t know if it has what it takes to really get on buyers’ radar, as it lacks in power and economy.

While it looks good and has a nicely revised interior, performance and fuel economy are still just ho-hum. Is the great warranty enough to offset that? Doubtful.

I wanted to love this car, and part of me does. The style was good. That Red Diamond paint was gorgeous. It’s different, and I enjoyed that.

But ultimately, styling tweaks, interior revisions, and a great warranty aren’t likely to be enough to get buyers to start buying this vehicle en masse. It’s not bad, and it’s better than it was. But that still might not be enough to make this a true competitor in the hyper-competitive compact CUV class. I’ll spare you any “eclipsing” metaphor.

Check out the 2022 Mitsubishi Eclipse Cross in even more detail.

Mitsubishi needs a hit, and the 2022 Mitsubishi Outlander CUV might just be that vehicle. In fact, it might be the best Mitsubishi in years. Read more…