Home » Motors » Behind the Wheel of the 2022 Subaru Forester Wilderness

It seems like everyone has suddenly has discovered the Great Outdoors. Over the past 15 years, the number of Americans who like to hike has nearly doubled, and there have been similar increases in the number of folks who go camping, hiking — and off-road driving.

That’s triggered a big jump in the number of vehicles that are being marketed as “trail-rated.” In addition to familiar marques like Jeep and Land Rover, several other brands have geared up their own off-road-oriented product lines.

Subaru, which already has a solid reputation for rugged and reliable models, took things to a new level earlier this year with the introduction of the Outback Wilderness. And it’s now adding a second nameplate to this brand-within-a-brand — the 2022 Forester Wilderness.

The compact SUV starts out with a good foundation — joining the entire Forester lineup in getting a significant mid-lifecycle update for 2022. That includes new bumpers, revised grilles and LED headlamps, and a variety of other interior and exterior tweaks. The crossover also gets a major upgrade to its well-reviewed Eyesight suite of advanced driver assistance systems.

Taking Things to a New Level 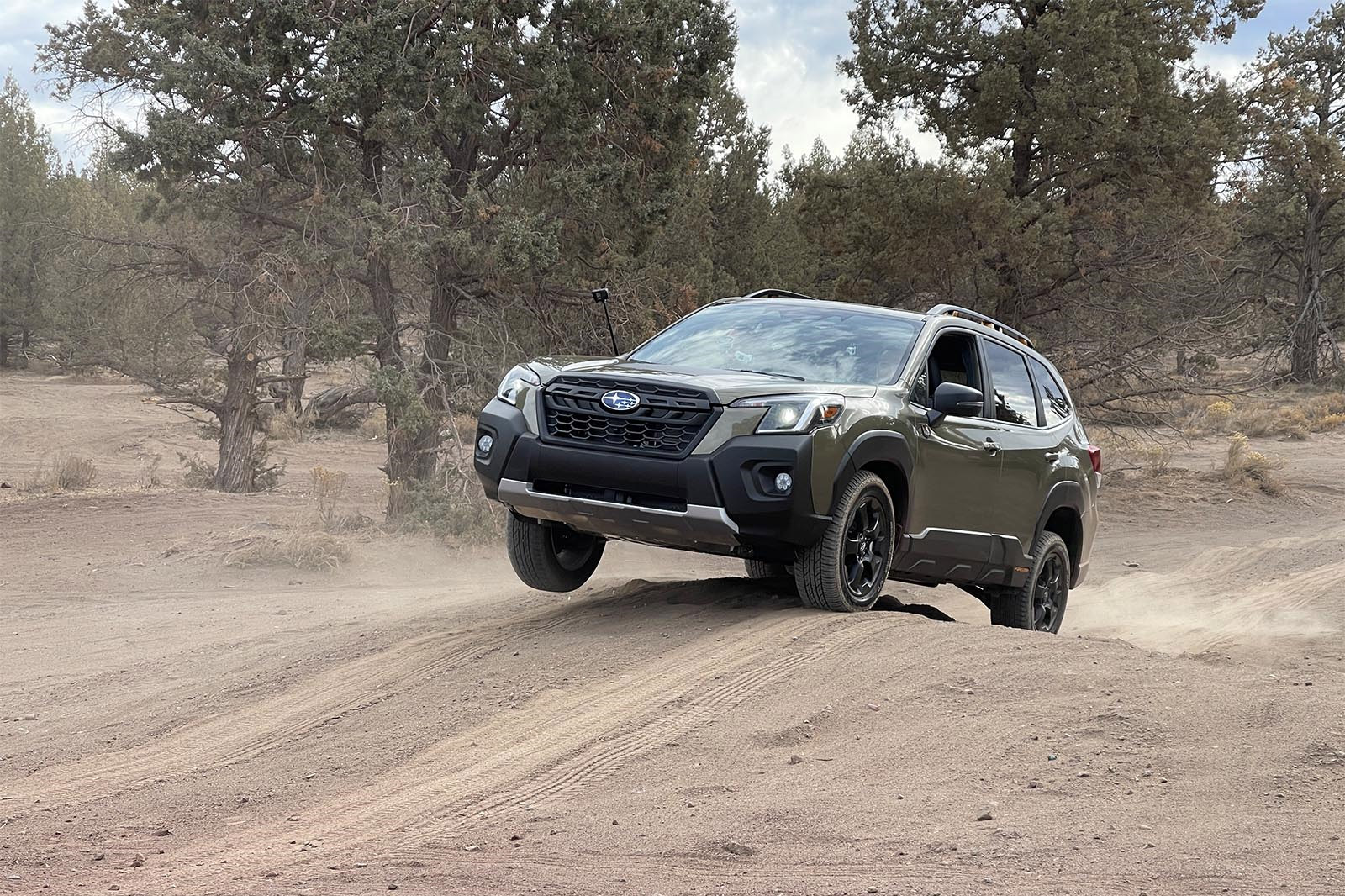 The Wilderness edition takes Forester to the next level from an off-road standpoint, with unique features such as underbody protection, increased ride height, a front-view camera, a roll-angle indicator, and bigger, trail-rated tires.

Yet, while the 2022 Subaru Forester Wilderness proved itself ready to take on some serious off-road adventures during a recent trip to Central Oregon, it also retained its good on-road manners, unlike some of the other trail-rated products that have jounced out a few of my fillings during recent test drives.

Over the years, I’ve seen plenty of manufacturers make cosmetic upgrades meant to suggest their SUVs are ready to hit the backwoods — even though they’d have a tough time dealing with anything rougher than a gravel road. The Forester Wilderness Edition seems designed for those rougher roads.

Putting the Emphasis on ‘Functional’ 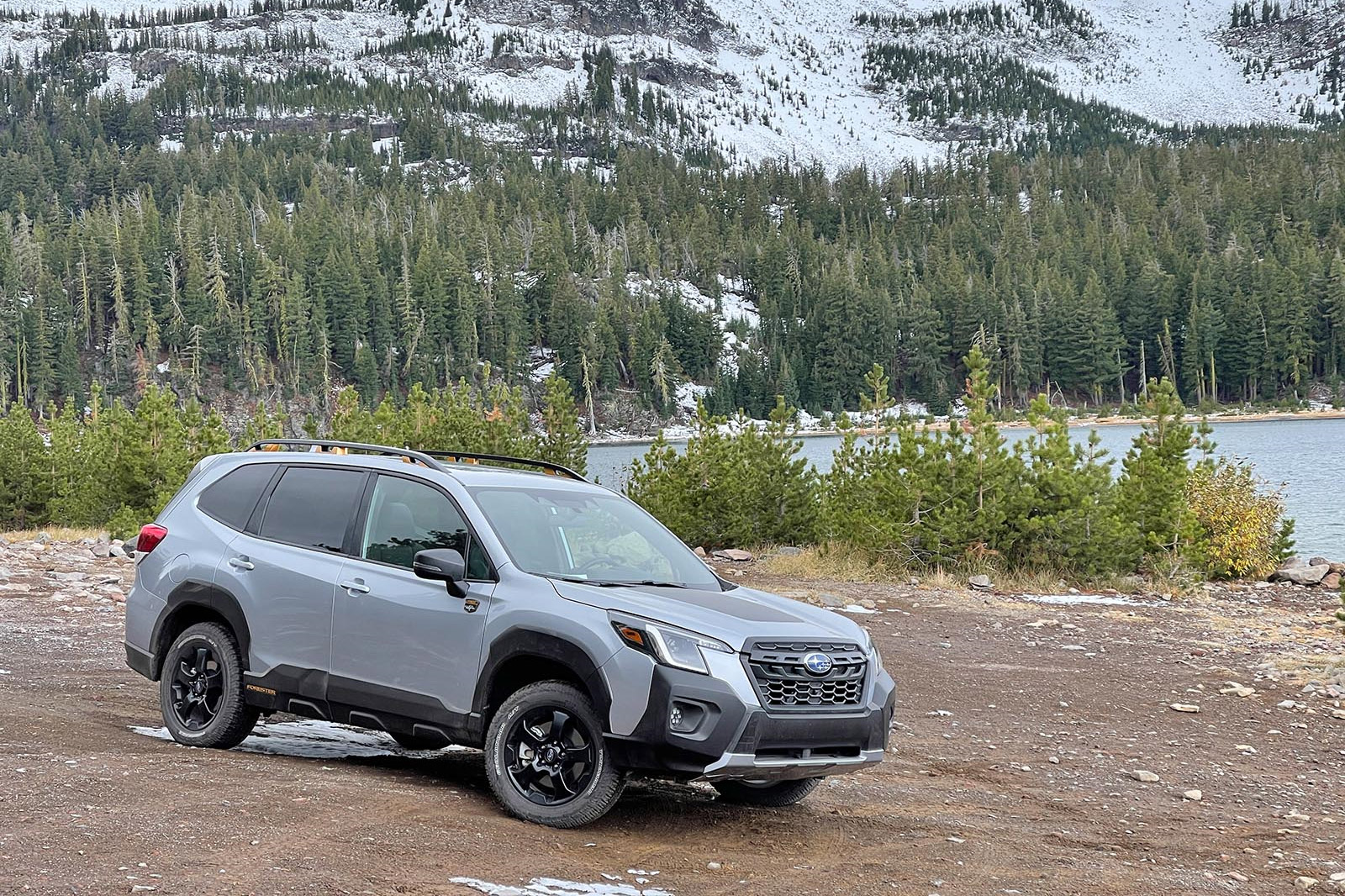 To transform the Forester into a Wilderness model, Subaru started out with some basic design tweaks. It gets a distinctive grille, a black antiglare decal on the hood, and unique, hexagonal LED fog lamps. The black cladding is larger than on the rest of the lineup, and the exterior mirror housings are unpainted, making them less likely to be scratched up.

Indeed, virtually all the exterior changes are functional, notably the skid plate under the engine compartment — with additional underbody protection available at a surprisingly reasonable price.

The Wilderness model’s ground clearance, meanwhile, has been raised from 8.7 to 9.2 inches. Forester’s angle of approach also goes from 20.0 degrees to 23.5 degrees with the Wilderness package.

The angle of departure jumps from 24.6 to 25.4 degrees, and the SUV’s breakover angle climbs from 19.6 to 21.0 degrees. As I would soon find out, those minor increases could make a major difference out on the trail.

About half of my long day’s journey was spent off-road, with a broad mix of mud and ruts, a bit of rock crawling, and the occasional splash through a creek. Forester’s 17-inch Yokohama Geolander all-terrain tires seldom lost their grip, whatever they faced. (And kudos to Subaru for offering a full-size spare tucked away under the cargo floor.) 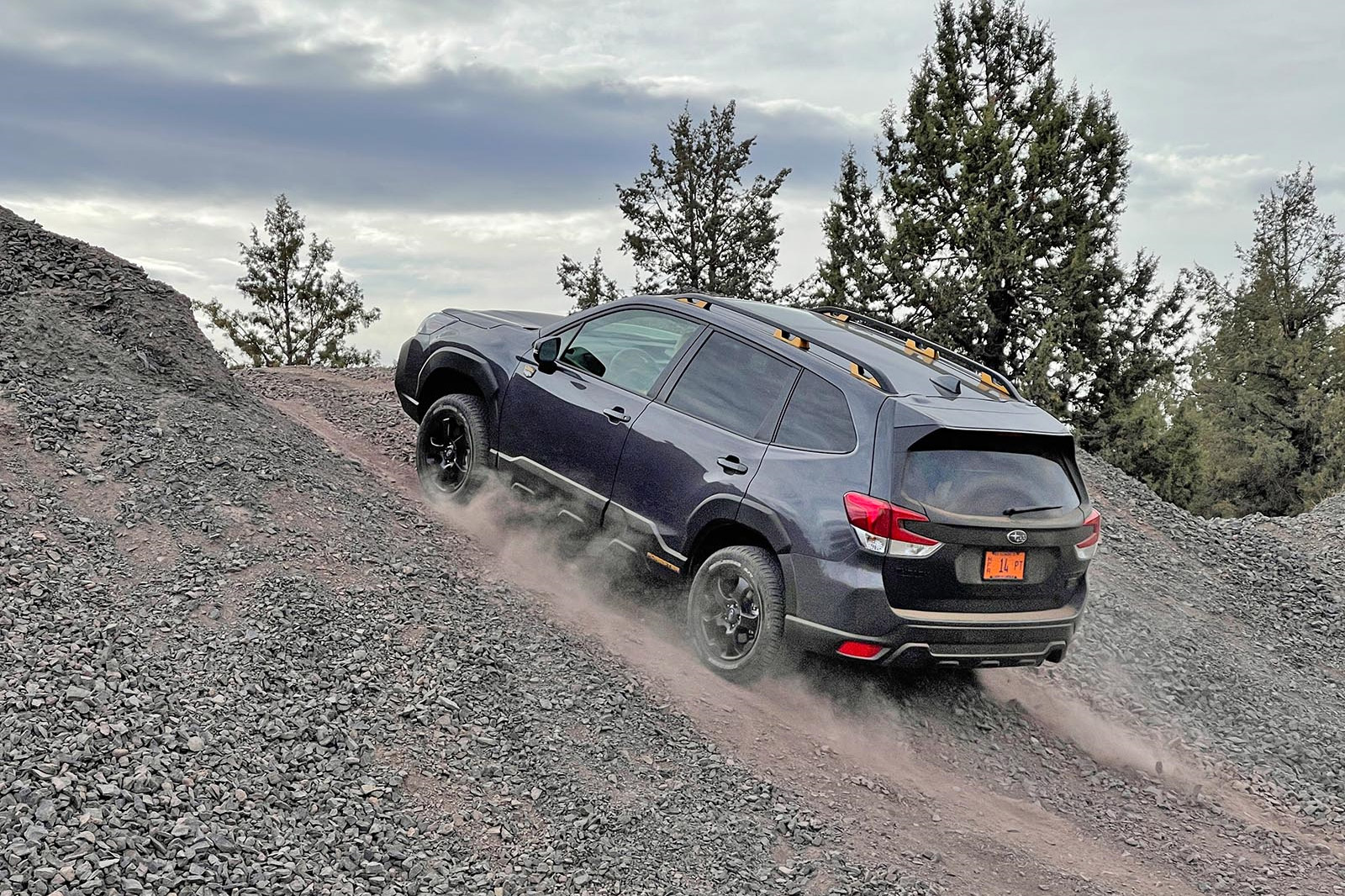 Of course, it helped to also have an upgraded version of Subaru’s X-Mode technology. This driver-selectable system shifts torque to where it is needed. And it offers settings specifically tuned to various off-road conditions such as snow, mud, sand, and deep ruts.

As with other Forester models, X-Mode disengages once you hit 25 mph. But with the Wilderness, it then reengages when you drop back below 22 mph.

X-Mode adjusts a number of the SUV’s functions, including both throttle and transmission response. Continuously variable transmissions typically aren’t my favorite, but Subaru’s engineers did a good job tuning it so you get little of that unpleasant rubber-banding effect when you take off from a stop.

It can be manually “shifted” to simulate a conventional step gearbox, as well. And out on the trail, the CVT delivers more low-end grunt, almost as if the Wilderness model had a low-gear range.

Forester’s 2.5L boxer engine has been retuned to favor bottom-end revs. It also doubles the crossover’s towing capacity, from 1,500 to 3,000 pounds. It comes exclusively in all-wheel-drive.

Could Use More Muscle 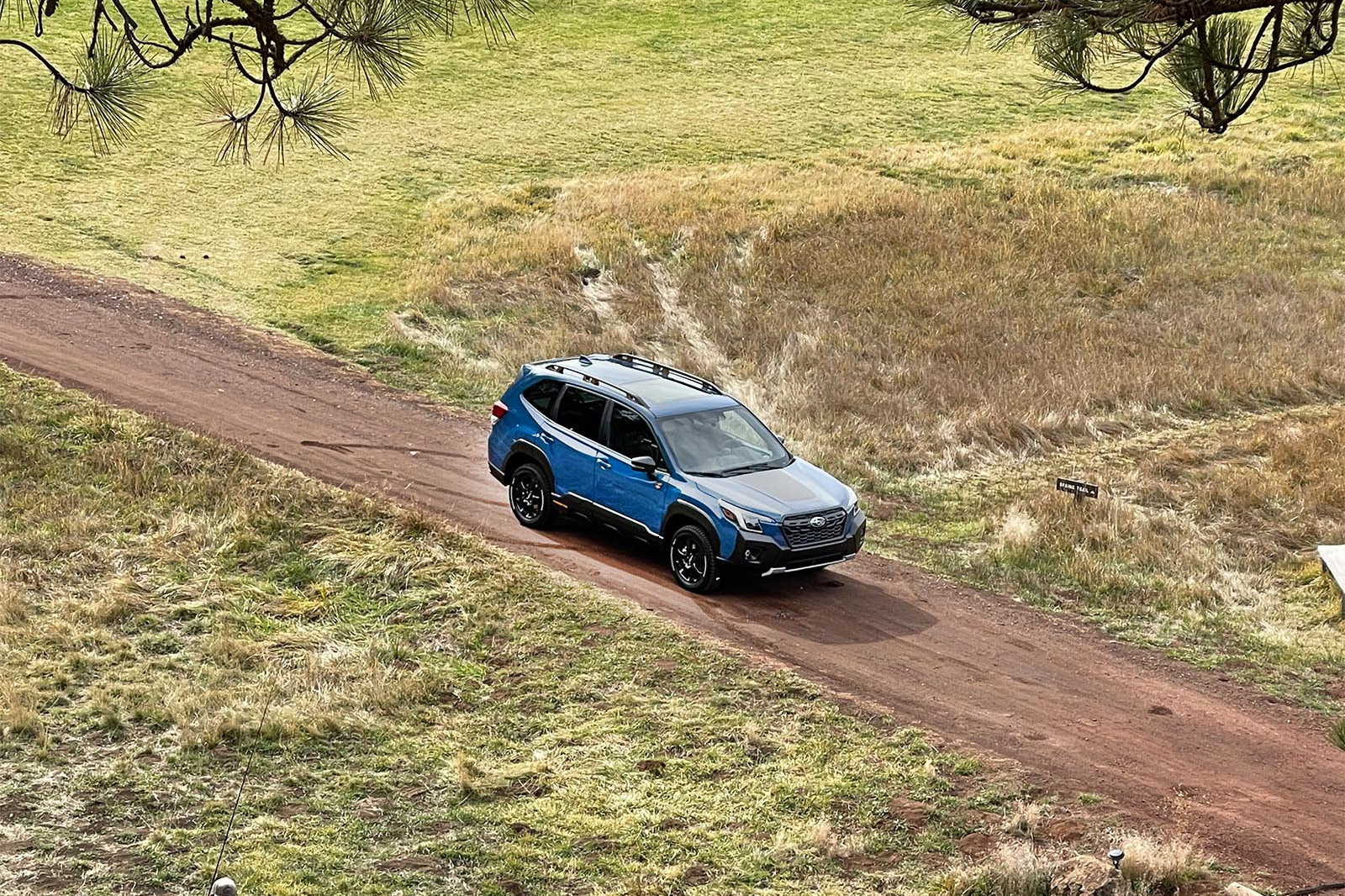 Unfortunately, the powertrain can seem a bit anemic when you try to execute a quick pass on the highway, as I discovered when cruising around Bend, Oregon, at 3,600 feet. This became ever more apparent the higher I went.

It’s no stone pony but, for an SUV likely to be taken up into the mountains, the Forester Wilderness could use a turbo option less likely to suffer from altitude sickness.

Beyond the need for more power at higher RPMs, the powertrain in the 2022 Wilderness was smooth and reasonably quiet. The SUV did pick up some rumble, especially on rough pavement, from those chunky Yokohama tires, however.

X-Mode is just one of the high-tech features Subaru has added to the Wilderness edition that proved particularly useful off-road. The front camera, which is placed as low as possible, prevented what could have been an embarrassing situation.

As my Forester crested a steep gravel-covered hill, it revealed that the downslope veered sharply to the left. Otherwise, I might have driven straight off a ledge. 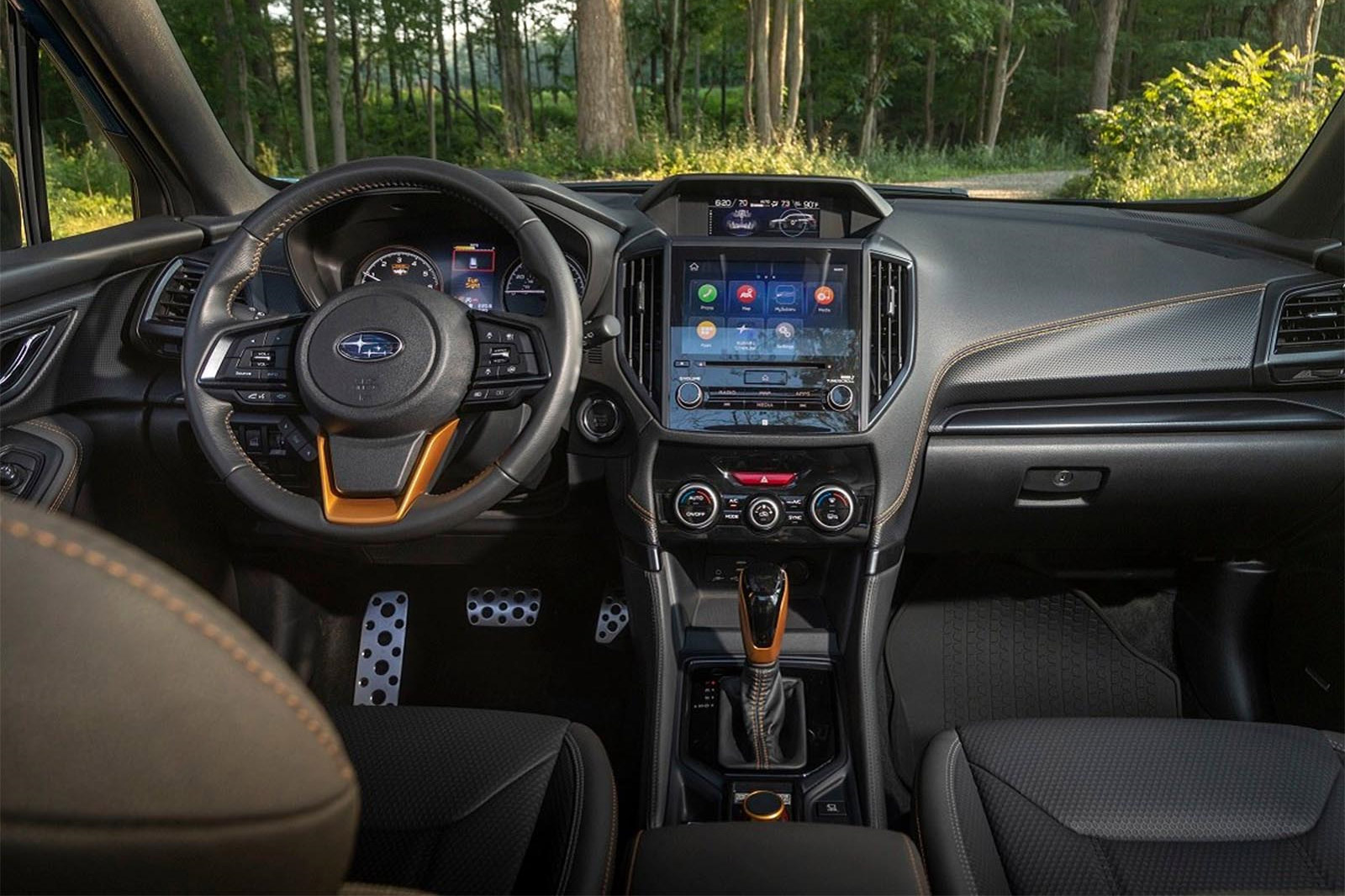 Depending on trim level, the Forester Wilderness has plenty of other useful technology onboard, starting with a digital gauge cluster and an 8-inch Starlink touchscreen. You can upgrade with a tech package including in-car navigation and a 9-speaker Harman Kardon premium audio system. With both Apple CarPlay and Android Auto, however, many buyers likely won’t spend the extra money.

As I noted earlier, all versions of the Forester get the latest upgrade of Subaru’s well-reviewed EyeSight technology. It has a broader field of view, allowing the automaker to expand the suite of advanced driver assistance systems. That now includes Automatic Emergency Steering to help avoid a collision at speeds up to 50 mph — along with reverse automatic braking that can prevent you from backing into obstacles, whether in a parking lot or out on the trail.

As with the exterior design, Subaru’s product development team focused on functionality as they put together the interior package. The Forester model uses the same water- and dirt-resistant StarTex material that first showed up on the Outback Wilderness. The black headliner, meanwhile, is less likely to get scuffed or marked up under rough use.

In its earlier incarnations, Forester tended to have what can euphemistically be called a “cheap-and-cheerful” interior, with far too much black plastic and generic seats. The entire Forester line — indeed, pretty much all Subaru models — has moved up several notches in recent years.

The cabin is far more attractive, with the Wilderness edition featuring details like copper-hued double-stitching on the instrument panel, doors, and seats, as well as anodized and gunmetal accents and alloy pedal covers.

The seats are not only better looking but far more comfortable on a long journey. And, appropriately enough, they’re particularly supportive when jouncing down a rugged trail.

For 2022, Subaru offers a wide range of trim packages for Forester buyers. You can get into the compact crossover for as little as $25,195. The Wilderness package starts at $32,820 — before factoring in delivery charges and other fees. That’s not much less than the top-line — albeit less backwoods-ready — Touring model, at $35,295.

For Those Heading Back to Nature 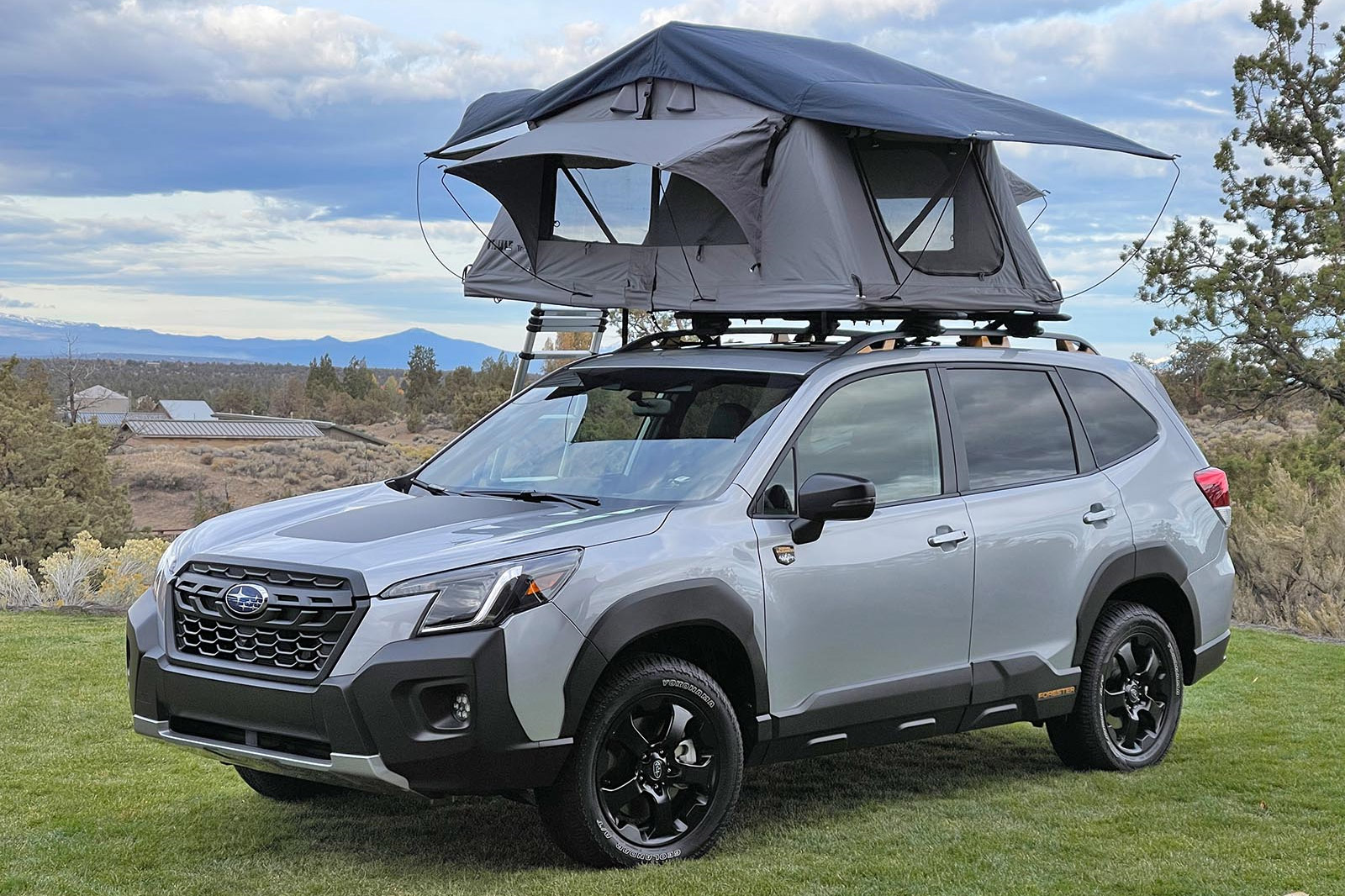 The 2022 Subaru Forester Wilderness isn’t for everyone. It’s not only more expensive than most trim packages but also cuts fuel economy to 25 mpg city, 28 highway, and 26 combined, down from 26/33/29 for the rest of the lineup.

But for those who want to spend some serious time off-road, it’s well worth considering. The Subaru Forester has earned a solid reputation among those living in Snowbelt country, but the Wilderness takes things to a new level. And, with so many more Americans looking to get back to nature, I expect this new package will find plenty of takers.

Up Next: V8 Ford Bronco DR Is a Race-Ready Reality, and You Can Buy It