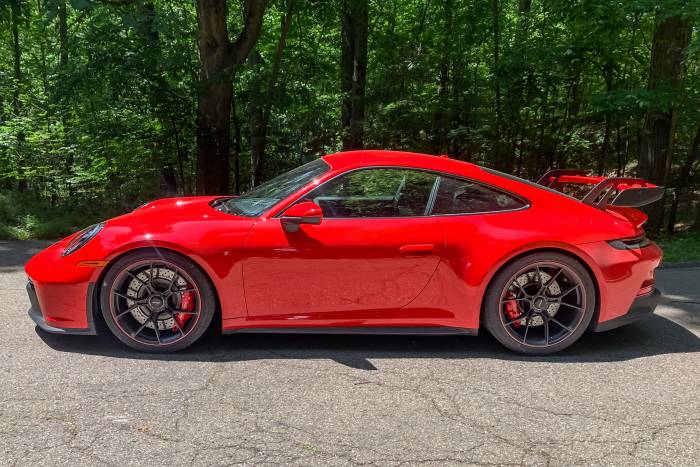 You get adjustable aerodynamics, which generates up to 150% more downforce than the outgoing model — and that includes a swan-neck mounted rear wing. Furthermore, Porsche plucked both the double-wishbone front suspension and engine from its race car lineup. Yeah, it’s legit.

Take a look at the pinnacle of driving nirvana. Notice I didn’t say fastest or fanciest. Certainly, faster, quicker, fancier cars exist. You know, cars with mega price tags and spec sheets that people reference to win arguments at the bar. Hell, Porsche even makes a few. But that’s not for true enthusiasts.

Who are driving enthusiasts? You know, folks that take pleasure from a screaming exhaust note. And marvel at the tension against their chest as they smash the brakes and lunge toward a corner. You see them smile whenever they clip an apex just so. And literally laugh out loud when the rear end wiggles as they accelerate into the next corner. Those people.

Race Engine for the Road

Let’s start in back. Down low, behind the seats — and indeed, the rear wheels — lies a naturally aspirated 4.0L flat-six engine that started its life powering 911GT3 Cup race cars. Since then, it found a home in the limited edition, and final build of the 991 chassis, the 2019 Porsche Speedster. But before Porsche bolted it up here, the engine received a thorough massage and with new parts, including pistons.

Moreover, each of the six cylinders gets its own throttle body and each piston inside said cylinder compresses at a 13.3:1 ratio. And to keep the oil lubricating critical parts — regardless of lateral Gs — Porsche mounted a dry-sump oil system to keep the supply healthy. All told, it makes a mighty 502 horsepower and 346 pound-feet of torque. And that’s not even the good part.

A seven-speed Porsche DoppelKupplung or Porsche double-clutch or PDK comes standard in the 2022 911 GT3. And it comes with launch control and lightning-quick shifts. With it, the GT3 hustles to 60 mph from rest in a claimed 3.2 seconds. And, if you resist life-preserving temptations to lift off the throttle, you’ll eventually reach 197 mph.

But! Porsche will gladly swap in a six-speed manual transmission at no extra cost. The positive-feeling, short-throw stick adds a layer of connection to the car and another level of gratification to the drive.

Yes, you need an extra half-second to hit 60 mph, 3.7 seconds, but who cares? That’s still furiously quick and you did it. You made it happen. Plus, silver lining, you can brag about your higher top speed, 198 mph. Take that, PDK!

Worth a mention, the GT3 is, of course, rear-wheel-drive. And power is distributed to both wheels via a mechanical limited-slip diff, which proves a very helpful companion at corner exit. More on that in a minute.

What holds the engine in place is the new-for-2020 992 generation Porsche 911. It’s the largest 911 to date, which also makes this GT3 the biggest yet, now stretching 180 inches from the front splitter to rear wing.

And it’s also the heaviest — but not by much. In fact, Porsche claims only an 11-pound increase between this, which now tips the scales at 3,126 pounds, and the outgoing GT3.

Porsche achieved this feat by employing several weight-saving tricks, which include using carbon-fiber-reinforced plastic for the hood, rear wing, and rear spoiler. Moreover, they used thinner panes of glass for the windshield and windows, used a lighter lithium-ion battery, and managed to take a full 22 pounds from the exhaust system.

Also lighter than before are the 20-inch (in front) and 21-inch (in the rear) forged aluminum-alloy center-locking wheels. It’s a staggered setup, of course, with 9.5-inch-wide wheels in front and a full foot wide in the rear. Tires follow suit, as 255/35s wrap around the front wheels while 315/30s provide rubber to lay down in the rear.

Massive 16.1-inch brake rotors with six-piston calipers clamping down on them hang out inside the front wheels, and 15.0-inch rotors with four-piston calipers do the work out back. All of that stays in place thanks to a multilink rear suspension, and for the first time in a GT3, a double-wishbone front suspension.

And not just any double-wishbone, but one plucked from the 24-Hours-of-Le-Mans-winning 911 RSR race car. Furthermore, Porsche went through the suspension and swapped out several bushings and replaced them with ball joints.

That rear axle steers as well, by the way, in the opposite direction as the front steering for low-speed agility and in the same direction at higher speed for stability.

The above pairs well with adjustable and adaptive shock absorbers named Porsche Active Suspension Management, or PASM. All put together, you have an unforgiving, fast-reacting, lightweight suspension that responds to your inputs like a puppy when it smells a treat.

Porsche surrounded all those mechanical bits with a beautiful body, full of purpose and adjustment.

In front, just above the front spoiler and splitters, you see a big opening to feed air to intercoolers. That hot air then gets redirected to exit at the base of the hood, like the blow holes of a blue whale.

In the back, you do get a slick-looking duckbill rear spoiler. But the fowl theme continues above with a swan-neck mounted adjustable rear wing. Gorgeous and functional, the rear wing contributes to the roughly 510 pounds of downforce generated by the GT3, which is a gain of 50% over the 991.2 GT3. And that’s in the factory settings.

You can adjust the front diffusers and rear wing to maximum downforce settings and generate nearly 840 pounds — a 150% increase — of downforce. All of this in a street-legal road car.

It’s worth mentioning as well that the GT3 sits 0.8 inches lower to the ground than a standard 911 Carrera and can be optioned with a front axle lift system to raise the car 1.2 inches, to help avoid scraping up all that lovely stuff up front. And, you could argue, hurting your downforce figures.

Given the seriousness of the kit installed outside, it’s no surprise that the inside is all business. A large, center-mounted, analog tachometer meets your eyes, with two 7-inch digital screens on either side to display more information.

The steering wheel comes with a thick, easy-to-handle rim wrapped in a faux suede material called Race-Tex. And it includes several buttons, such as a dial to choose between normal, sport, and track driving modes.

You sit in deeply bolstered, snugly fitting seats adorned in the same material as the wheel. If that’s not extreme enough for you, optional carbon-fiber bucket seats are available for a further 26-pound weight reduction. Within easy reach is a 10.9-inch center console touchscreen, and beneath that a glorious to behold six-speed shifter.

You sit very low in the GT3, as if the butt of your jeans may get stone-washed by the pavement were it not for those seats. Thank goodness, then, that the front windshield is quite long and extends low into the front cowl, giving you an expansive view of the road ahead.

Put all together, Porsche built a rocket of a car that launches you straight to the driving satisfaction stratosphere. All five senses are engaged and enlivened by the experience. And it all starts with a slip of the clutch and burying your right foot into the firewall.

With six individual throttle bodies feeding copious amounts of air, revs build with ferocity, yet linearly. With no turbos to spool up, power comes on smoothly and, once you crest 6,000 rpm, abundantly.

Don’t shift! You still have 3,000 revs to play with and power keeps building. That aforementioned siren song heads toward its crescendo and blasts the GT3 down its path like a Funny Car and you find yourself laughing out loud, overwhelmed by the joy of it all.

As you approach a corner, a deliberate press of the brake pedal throws your chest into the seat belt with hurricane wind force. Everything happens fast, but you must slow down before entering your first corner.

More specifically, slow your hands down, because the front end is so quick to react to any input that adding steering lock quickly results in reaching the apex 50 feet too early. Regardless of hand speed, you’ll pull a G with grip to spare.

But then go ahead and speed up again and bury that throttle; the rear-engine, rear-wheel-drive 911 can handle early and heavy throttle application exiting out of a corner. The steering load lightens, but the tires hold on as you light off like a bottle rocket to the next corner, smiling from ear to ear, muscles straining against your cheekbones.

With this GT3, Porsche bridged the gap between a road and race car by more than half. After all, you literally get several bits from the race car parts bin. Race cars aren’t cheap. Nor is the GT3. Starting price for the seventh-generation GT3 is $164,150, and a long options list quickly tacks on dollars from there. And yet, the experience behind wheel makes the price fair.

That’s because the GT3 communicates with the driver so well. You feel the road through your hands and backside with perfect clarity. Regardless of how fast you’re going, you always know what’s left, which takes away any intimidation in driving it.

Driving a Porsche 911 GT3 builds confidence. Confidence builds satisfaction. And satisfaction builds fun. And that’s how your reach the driving enthusiast stratosphere. After all, they say communication is key in any good relationship, right?

(Do note that dealer markups and long preferred customer wait lists are the norm when buying Porsche GT cars, so don’t expect to roll into a dealership and just buy one of these special cars off the showroom floor.)