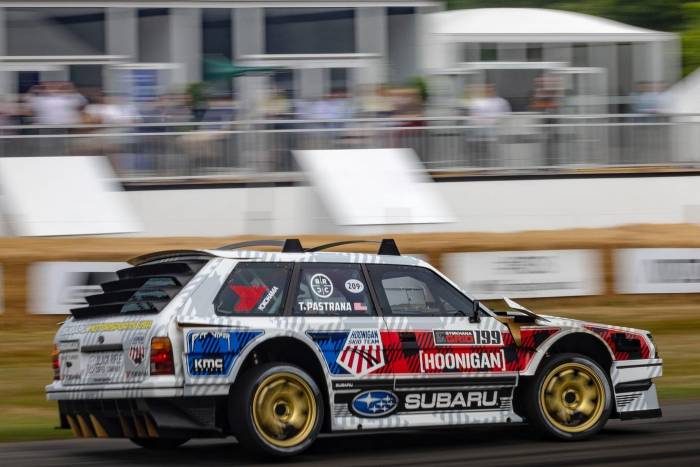 Travis Pastrana’s Family Huckster made its public debut at the Goodwood Festival of Speed. And while Pastrana found himself upside down over the weekend, we’re glad it wasn’t in this.

Travis Pastrana’s latest Gymkhana car, a 1983 Subaru GL nicknamed the Family Huckster, made its debut at the Goodwood Festival of Speed.

The latest edition of Subaru’s Launch Control series is a sweet video of the car’s inaugural event and the entire Festival weekend. Even the part of the weekend when Pastrana overcooked things in a different Subaru and ended up with the shiny side down.

Pastrana’s 1983 Subaru GL doesn’t have that much Subaru left in it. At least not anything the automaker would have recognized in 1983.

Instead of a 73-horse 1.8L engine under the hood, it has an 862-horsepower turbocharged boxer-four and a six-speed sequential gearbox. The car wears a completely custom carbon fiber body and has a tube chassis. It also has as many moving flaps, slats, and wings as a 737.

The Family Huckster is the latest car built for the Gymkhana series of rally and drift videos created by the Hoonigan team. We’re not sure when that video will drop, but it doesn’t matter because the car’s trip to Goodwood is more than enough to tide us over.

Goodwood’s Festival of Speed is a massive automotive showcase event in the U.K. Some of the most historic cars, fastest cars, and coolest cars in the world get the chance to tear up the driveway that is the official race course. There’s so much action that a separate rally course was also built.

Before Pastrana’s hill climb run, he was giving out rides on the rally course in a custom rally Subaru STI. With one lucky — or maybe not — journalist in the co-driver seat, Pastrana had a bit of an oops.

The car ended up on its side when Pastrana cut a corner a little bit too close. Both driver and passenger were OK, but, as Pastrana said, “Sometimes I run out of talent.” To be fair to him, it’s a pretty deep well of talent.

After getting back on all four wheels, Pastrana got ready for the Goodwood hillclimb qualifying in the Family Huckster.

That qualifying run was the first time we really got to see the car’s amazing active aerodynamic devices. Flapping like paper in the wind, every turning, acceleration, and braking event had the car’s flaps moving to help give Pastrana more control and some extra stopping power or speed.

What’s it like behind the wheel? “It’s always sliding. It’s always moving. It’s scary as all get-out,” said Pastrana. “I’m not sure where out of control is. I’m sure I’m gonna find it … but I just hope I don’t find it at 130 miles per hour at the top in the hay bales.”

The video finishes off with the event’s big show — Pastrana’s flat-out hill climb up the Goodwood racetrack. It’s not a long track, or a wide one, but Pastrana uses every single inch of the tarmac driveway — and a little bit of the grass. All to get to the top as quickly as possible.

The car’s time was impressive, but seeing the car parked in front of Goodwood House with a laureled wreath on the hood might have been even more impressive.

No time to wait, of course, because the car was immediately getting packed up and sent back to the States for the filming of the next Gymkhana. 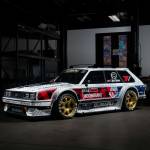 A 1983 Subaru GL with 862 horsepower and active aero is ready to launch at the Goodwood Festival of Speed. Read more…