The Ultra4 cars that are the highlight of the King of the Hammers (KOH) off-road race are like nothing else. Specially designed rigs blend the articulation and gear ratios needed for crawling over boulders with the stability needed for high-speed, flat-out desert racing. Ahead of the 2023 running of KOH, HeavyMetalConcepts looks at the origins and evolution of these unique pieces of gear.

King of the Hammers was first run in 2008 and has grown massively since. The event is held each February in Means Dry Lake. Part of the Johnson Valley, east over the hills from Los Angeles. More than 530 competitors and 80,000 spectators are expected for the weeklong event that leads up to the KOH main race set for Feb. 11, 2023.

The pinnacle of Ultra4 cars is the 4400 Unlimited Class. It’s the class that started the original race and made the Ultra4 yearlong series possible. Today the buggies use powerful engines capable of generating more than 800 horsepower for hours at a time.

Custom-built portal axles and massive tires on beadlock rims are all part of the equation. Even redundant backup electrical systems are used because of the challenges of the heat, vibration, and dust of the desert. OEMs like Ford and Mopar bring their newest equipment, as much to put it to the test as to show it off.

But they didn’t start out that way.

In 2008, Ultra4 cars were more like your typical backyard rock crawler build. Far from stock, but the kind of racer you could imagine putting together at home — at least if your fabrication skills were up to snuff.

The first independent front suspension entrant showed up in 2010, but the debate over solid axle versus IFS hasn’t slowed down. Even with independent rear suspension setups now in some cars, competitors argue about which is the best way. You can hear both sides in the video above discussing which is better and why.

Competitors call the most advanced Ultra4 Unlimited cars “spaceships.” Not just because of what they can do, but because of how much technology and engineering goes into the design and creation of the race vehicles.

Beyond the Unlimited Class

There are lower classes of Ultra4 cars. The 4800 Legends Class, for example, is meant for cars that are no longer at the pointy end of the stick in the Unlimited Class. They have some changes from their glory days like the need for two seats, a front-mounted engine, 37-inch DOT-legal tires, and a few more class requirements.

Ultra4 also includes the 4600 Stock Class, which requires 35s and a factory engine and frame. Plus, the 4500 Modified Class lets racers step up somewhere between Stock and Unlimited.

Only the Unlimited cars, the focus of this video, compete at the top: The Race of Kings, where the racers have 14 hours to complete a grueling 165-mile course. With no chase cars, competitors must fix anything that breaks on the course or nurse their ride back to the pits.

It’s a safe bet that you’re going to get hooked by the Evolution of the Ultra4 Car. Fortunately, when you do, HeavyMetalConcepts has two more videos ready to go. One explores the evolution of the King of the Hammers event itself and one takes a deep dive into what makes the Ultra4 car tick. 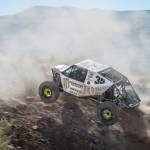 Welcome to the Insane World of Off-Road 'Ultra4 Racing'