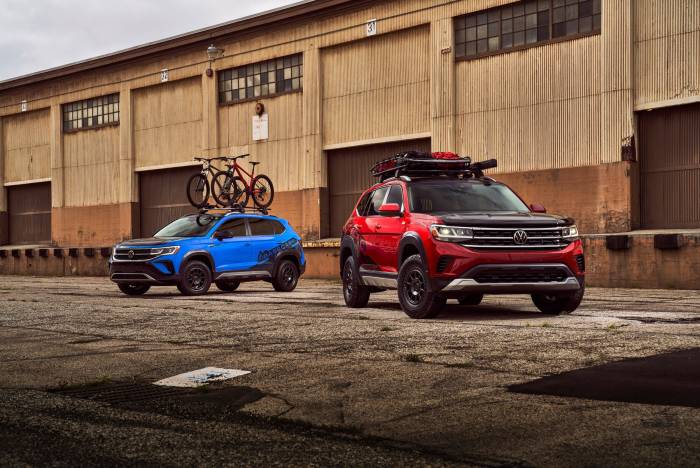 Volkswagen put together four concept builds aimed at adventurers. A VW Atlas and a Taos ready for off-road fun and two ID.4 electrics that show your EV doesn’t need to stay stock.

Do you think of Volkswagen when you think of off-roading? If you answered that you don’t, the automaker is trying to change that — because VW is all about crossovers these days, like the Atlas, Taos, and electric ID.4. That’s why Volkswagen brought two new Basecamp Active concept vehicles and some adventure-ready electrics to the 2022 SEMA show.

Volkswagen’s Basecamp concept lineup was introduced in 2019. That year, VW showed off a line of accessories for the three-row Atlas crossover. It build more rugged concepts in 2021 and is continuing to show off its capabilities and after-sale accessories this year.

The smaller of the two concepts is the Volkswagen Taos Basecamp Active. That’s the blue one, and it starts with a 2022 Taos SEL 4Motion AWD. Volkswagen fitted H&R springs to the little Taos, lifting it slightly and giving it more ground clearance. There are Falken Wildpeak all-terrain tires fitted to the super-cool 17-inch Fifteen52 Traverse MX wheels.

A lift and the wheels weren’t enough to get the stance just right. So Volkswagen fitted Trak+ wheel spacers to the graphite-finished wheels to make everything perfect.

The Basecamp is meant to show off VW’s accessory catalog too, so it’s loaded with dealer extras. The base carrier bars on the roof come from the Volkswagen Accessories lineup, and so do the bike racks mounted to them. The same goes for the full display mirror inside, the tablet holder, and the first-aid kit.

When you’re off-road, the Taos is protected by a Bumperdillo protection plate and a hood deflector while Muddybuddy floor liners keep mud off of the carpet. Parts you can’t get from VW — yet — include the custom cargo divider in the trunk with custom trunk lighting.

The Taos gets a “Basecamp” graphics pack from VW’s California design studio. The mud-splash motif is shared with the bigger Atlas Basecamp Camping concept, but it looks equally at home on both.

Atlas Basecamp is meant to help get you outdoors and be, well, your base camp. The 2022 Atlas VR6 gets an H&R Springs suspension lift with Street Performance Adventure Lift coilover suspension. It wears the same Fifteen52 wheels as the Taos, but with larger versions of the same Falken all-terrain tires.

A Volkswagen Accessories crossbar holds the Thule basket and a side awning. In the trunk, VW has packed a prototype air pump from NSV to inflate your mattress or raft, and a Tuffy Security Products console safe helps protect your valuables.

The two electric ID.4 concepts aren’t your typical EV show cars. The first one is part of a collaboration with the Tennessee Valley Authority, the electrical supplier to much of the South, including VW’s own Chattanooga plant.

It has H&R wheel spacers and 18-inch all-terrain tires with a heavy-duty suspension to help it venture off-pavement. The concept is a mobile drone response vehicle with loads of LED emergency lighting and a custom trunk-mount drone storage and charge unit.

The second ID.4 is to get you outside. It has a Thule Canyon roof-mount gear basket and an Apex hitch-mount bike rack. The 18-inch wheels are spaced out and wear all-terrain tires to give the AWD EV some extra capability when the pavement turns to dirt.

Volkswagen doesn’t plan to sell copies of these vehicles from its dealers, but they do use easily available parts. Except for the graphics, you can get most of the extras from your local dealer and your favorite aftermarket off-road shop. 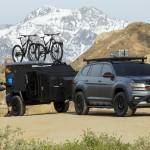