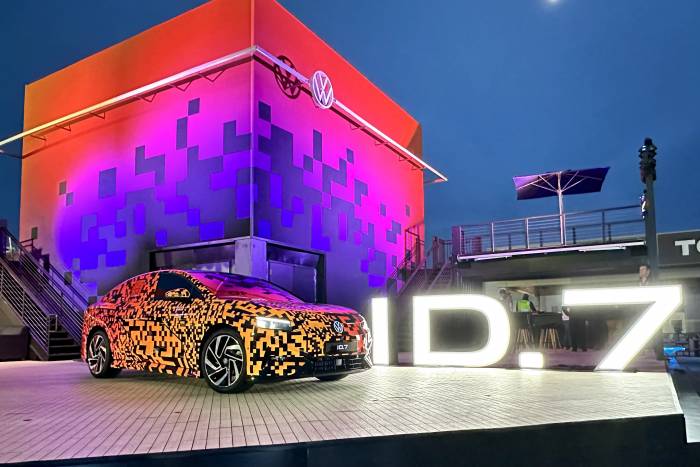 Volkswagen’s lineup of battery-electric vehicles is finally going to grow — and fast. The latest is the VW ID.7 sedan, just unveiled at CES.

Covered in “digital camouflage,” Volkswagen rolled out the next entry in its all-electric lineup, the ID.7 sedan, making its debut at the Consumer Electronics Show (CES) in Las Vegas on Tuesday evening. It’s part of a growing lineup that also will include the ID. Buzz, the battery-electric answer to VW’s classic microbus.

While initially slow to the EV party, Volkswagen is making a high-powered push into electrification, planning to invest over $100 billion in battery-powered vehicles this decade. It’s already launched several models, though U.S. buyers only have access to the original ID.4 crossover.

That’s about to change, with VW preparing to expand its American offerings. Both a long-wheelbase version of the ID. Buzz microbus and the new ID.7 sedan are headed to our shores.

While the public will have to wait a few months to get a look at an undisguised version of the four-door EV, visitors to CES are getting a sneak peek at a version using what the automaker describes as “digital camouflage,” which creates an electroluminescent light effect.

Volkswagen was slow to embrace battery power, preferring to stick with the diesel engines that long dominated its vehicles. That strategy was abandoned when the automaker was found to be rigging emissions tests for its oil-burner models. It has since laid out plans to invest over $100 billion to go electric, with a handful of EVs now filling its global showrooms.

U.S. buyers have had a relatively sparse lineup to choose from, however, just variants of the midsize ID.4 crossover. But the all-electric family is set to grow, with a long-wheelbase ID. Buzz microbus scheduled to arrive this year, followed by the ID.7 sedan.

“With the new ID.7, we are extending our electric model range into the upper segments. The sedan will offer top-class technology and quality,” said Thomas Schäfer, CEO of Volkswagen Passenger Cars.

“The ID.7 is one of 10 new electric models that we are planning to launch by 2026. Our goal? To deliver suitable products for our customers in every single segment.”

From Aero to ID.7

The four-door was first teased last year in the form of the ID. Aero Concept, unveiled in China. The ID.7 making its debut at CES this week doesn’t stray from the show car’s basic design, with a low, sloping nose flowing into a coupe-like roofline.

As has become the norm with today’s EVs, aerodynamics plays a critical role, helping engineers maximize range. A solid fascia replaces the traditional grille, framed here with slit-like lamps that wrap into ID.7’s front fenders. A lightbar links the twin lamps, running across the sealed grille. VW designers took a similar approach in back, a lightbar linking the left and right taillights.

The ID. Aero concept had an extremely clean 0.23 coefficient of drag, and if the production sedan comes close, it would become one of the most wind-slippery vehicles on the road.

VW is keeping everyone guessing about the final exterior design details. But with a formal, undisguised reveal scheduled for late winter, we won’t have to wait long. While the sedan on display in Las Vegas is close to the final production design, it’s covered in what may be the most unusual “camouflage” any automaker has yet turned to.

Rather than using cloth or a wrap, VW has applied 40 layers of a special, electroluminescent paint and can light up 22 separate areas independently. They even can be synced to music.

Several large QR codes on the ID.7 prototype will let viewers find out more about the next all-electric model in Volkswagen’s ID family.

Volkswagen’s original ID.4 model had a decidedly high-tech cabin — perhaps too high-tech for some users who struggled to operate all the features controlled by the crossover’s touchscreen.

The automaker says it has “responded to customer feedback” with several updates. There are now more conventional controls within the driver’s reach. And the infotainment system’s user interface has been updated.

But the ID.7 hasn’t gone low-tech. The digital gauge cluster has been repositioned to make it easier to read. The touchscreen appears larger — though VW hasn’t released specific details.

There’s also a new augmented-reality heads-up display that can project arrows that seemingly float in front of the vehicle to make it easier to see where to make a turn.

The climate control system introduces new “smart” air vents that can direct air onto individual occupants, flow it into the cabin, or swing back and forth like a table fan. The system also can detect the angle of the sun and adjust the heating or cooling system accordingly.

A driver can also use the new voice assistant to control the climate system. They can, for example, say, “Hello, Volkswagen, my hands are cold,” and the system will automatically turn on the steering wheel heater and direct warm air at their hands.

ID.7’s wheelbase comes in at 116.9 inches. VW hasn’t revealed other dimensions. It will be positioned as the all-electric alternative to the automaker’s familiar Passat sedan.

The ID.7 prototype — and the production model to follow — shares the same underpinnings as the ID.4, Volkswagen’s flexible, skateboard-like MEB “architecture.” The platform places the battery pack and motors under the load floor and translates into a compact footprint with a midsize cabin.

This is another detail we likely won’t know until the full ID.7 reveal, but European sources have indicated that the sedan will follow the approach taken with the ID.4 crossover — with a choice of a single-motor rear-wheel-drive package or a twin-motor all-wheel-drive system.

VW has been working to upgrade its lithium-ion battery technology and may boost the size of the extended-range pack in ID.7. Depending on the market, it’s expected to follow the approach taken with the ID.4, offering both 62kWh and 90-95kWh (final homologation not yet completed) packs.

Tech chief Schäfer previously said that the ID.7 will deliver up to 700 km, or about 435 miles, of range. That is, however, based on the European WLTP standard. Typically, the numbers drop by as much as 25% when using the more rigid EPA test cycle.

Charging is expected to be quicker than with the ID.4, though VW has yet to release details here as well. The system will have a built-in 22kW AC charger and be able to draw up to 170 kW from a DC quick charger.

VW wants to build buzz for the ID.7 with a first reveal at CES and a more complete unveiling in April.

The automaker will follow its familiar pattern when putting the electric sedan into production. It’s expected to reach showrooms in China — the world’s largest EV market — in the summer of 2023. European deliveries will start in the fall of 2023. And then North American dealers will begin to take delivery by late in early 2024.

China will also get a slightly different version — closer to the ID.Aero Concept — which will be slightly longer and wider, with more back seat room. Europe will get a wagon version — in the fall of 2024 — as well as a GTX performance model. Sadly there are no plans for any of these versions of the ID.7 to make it to North American shores.

We’ll also have to wait for pricing details, though several sources have indicated the 2024 Volkswagen ID.7 should start somewhere in the low $50,000 range in the U.S. 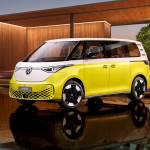 Volkswagen is finally rolling out the long-awaited replacement for its iconic Microbus — though the new ID. Buzz won’t make it to the U.S. for another year. Read more…