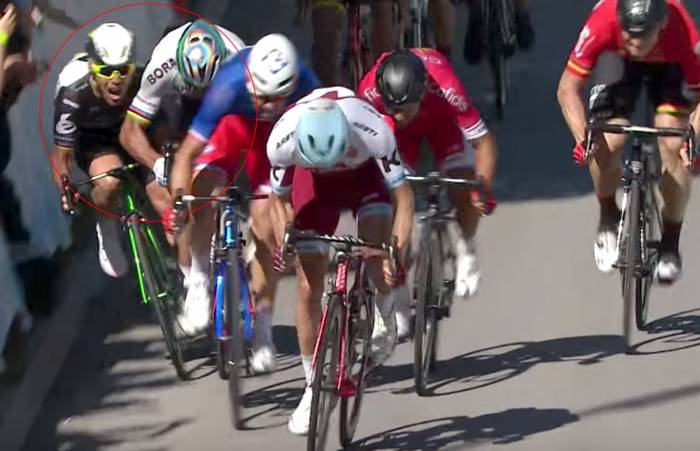 The Tour de France yesterday kicked out one of its largest stars for allegedly elbowing a fellow racer. It was a mistake.

The world of cycling just lost its biggest star in the Tour De France. Peter Sagan, a superstar arguably twice as popular than the next most popular cyclist, was kicked out of the Super Bowl of bike racing for elbowing Mark Cavendish into a barricade.

The violent crash occurred in the final meters of Stage 4, with Cavendish crashing into the metal barrier, leaving him bruised and bleeding on the ground. Cavendish broke his shoulder in the crash, and will drop out of the race.

Sagan’s expulsion is a huge blow to the superstar, and to the casual and serious fan as well.

Near the finish of the 4th Stage of the Tour, Frenchman Arnaud Demare (in red and blue), broke out from the protection of the riders in front of him with 300 meters to go, bursting forward and to the right with a massive turn of power.

Sensing Demare’s power and speed was the winning move, both Peter Sagan and Mark Cavendish knew they needed to draft him to have a chance to win.

As they drifted right into the slipstream of Demare, sprinting on the narrow road at 45mph, Cavendish was behind and on the right. As they moved closer to the wall, sensing danger, Cavendish tried to protect his space by head-butting Sagan.

Similarly, Sagan tried to protect his space by throwing his right elbow outward toward Cavendish.

Full speed video of the crash is seen here.

What The Racers Say

“I didn’t know that Mark was behind me.”-  Peter Sagan.

“I am fine with him coming across, but I’m not a fan of him putting his elbow in me like that.” – Mark Cavendish

What Current And Former Pros Say 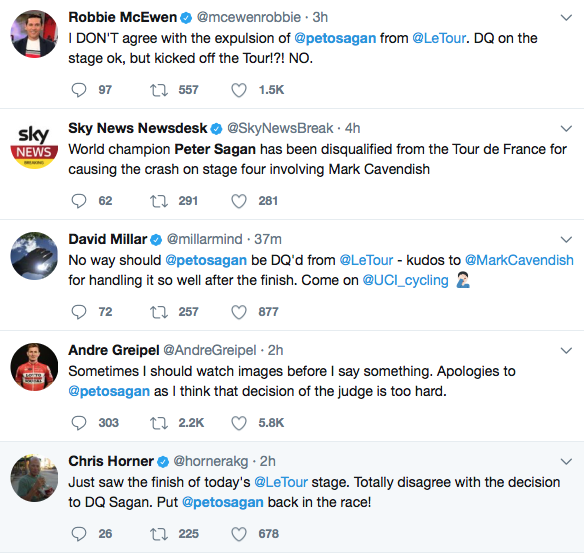 “Sagan is not at fault there. Sagan was further ahead. Cavendish was riding into a gap that was not there.” – Bob Roll, former professional and NBC commentator

“I disagree with that. I totally disagree with that… …I’m not a fanboy. I’m not in his pocket…  …I can’t believe they kicked him out of the Tour De France. That is fucked up.” – Lance Armstrong, former superstar of the cycling world, Sagan’s predecessor

“Had Sagan not done what he did he would have gone down himself. He had nowhere to go other than to put his brakes on and they don’t do that.” – Rob Hayles, former professional

The safety of the riders is the highest priority of UCI judges. But they must also protect the fairness of the sport, and the entertainment value for the audience. Was Sagan’s expulsion necessary? Is the tour nearly the same without Sagan included? No, and no.

We can’t know Sagan’s knowledge of Cavendish’s position. The sprint is an adrenaline-soaked fight for survival that occurs too fast for the rules to require that Sagan knows where riders are behind him. Nor can we know what Sagan’s intent was when throwing his elbow out, was it malicious or an instinctual protection of his space?

Is it possible that Sagan was worried about Cavendish passing him on the right, so he put him into the wall like a Nascar racer? It may be.

Or was Sagan trying to responsibly protect the space behind Demare (the winning rider) that he was entitled to protect because he was in front of Cavendish? It sure was. It’s an equally tenable argument, and it’s the side that most former pros are on, and mine as well.

Kicking any rider out of the Tour De France, especially Peter Sagan, should only happen if the judges know with certainty that a rider was acting with the intent to injure, or with such reckless abandon separate from logical strategy that it rises to the same level. This did not occur here.

Sagan should have been given last place on the stage, lost all of the points he won today, and allowed to start the next day.

Final Wrinkle Nobody Is Talking About

If you want to dig further into today’s stage, there was a crash that occurred just prior to this one. Was this also Sagan’s fault?  Check it out! Indeed, the judges’ job is not an easy one.