Detroit dominated in many of Consumer Reports’ most important categories, starting with pickups. But the U.S. also overwhelmed its import rivals in other growing segments of the market. American brands proved more reliable in categories like small SUVs and compact luxury SUVs, topping such familiar products as the Toyota RAV4 and Lexus NX.

That said, one U.S. brand hamstrung domestics’ overall ratings. Tesla continued to suffer some of the most severe quality and reliability issues of any brand studied by Consumer Reports.

Japanese Own the Top 10 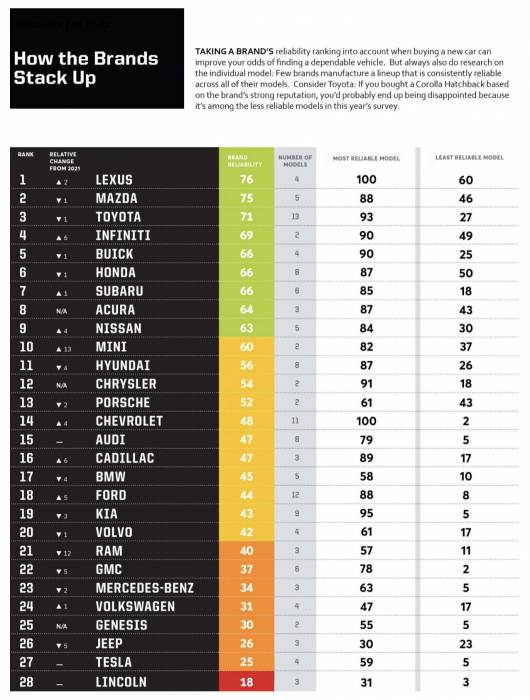 On the whole, the Japanese came out well in the annual survey of owners, which focuses specifically on defects and failures reported by millions of U.S. vehicle owners. Lexus was the top-ranked brand, followed by Mazda and Toyota. Buick was the only domestic brand to land in the top 10, with Mini the only European marque.

“We’ve seen this trend before,” said Jake Fisher, executive director of automotive testing for Consumer Reports. “And for the same reason. [The Japanese] are more conservative in rolling out new technology. Toyota and Lexus, in particular, tend to be the last ones with things like Apple CarPlay, and that has served them well.” 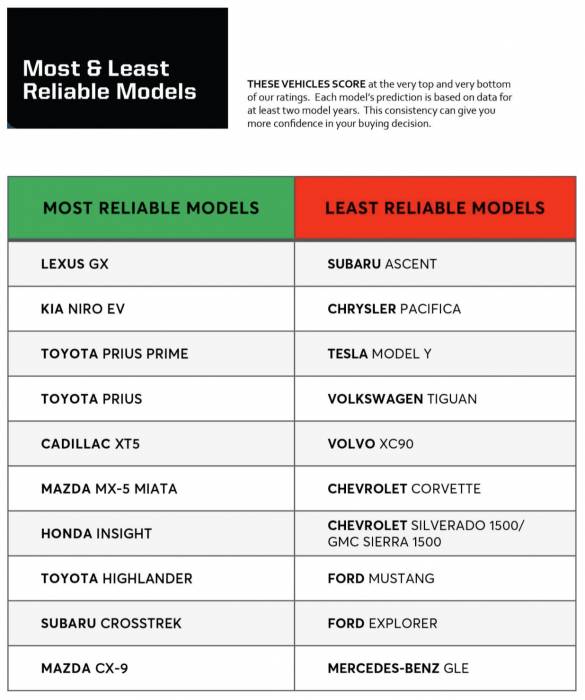 Traditional mechanical problems, such as faulty transmissions and balky engines, are increasingly rare. These days, the majority of problems motorists experience involve glitchy navigation systems and voice recognition systems that don’t recognize voices — something that has shown up in other studies, such as the J.D. Power Initial Quality Study. Tech failures accounted for the vast majority of issues in the latest IQS.

Digging deeper into the Consumer Reports study, however, yields some unexpected findings. While Japanese brands might have led overall “in terms of growing segments,” said Fisher, “every one of them had domestic models at the top in terms of reliability.”

Pickups are a prime example. Detroit simply overwhelmed its competitors in the midsize, full-size, and heavy-duty categories. 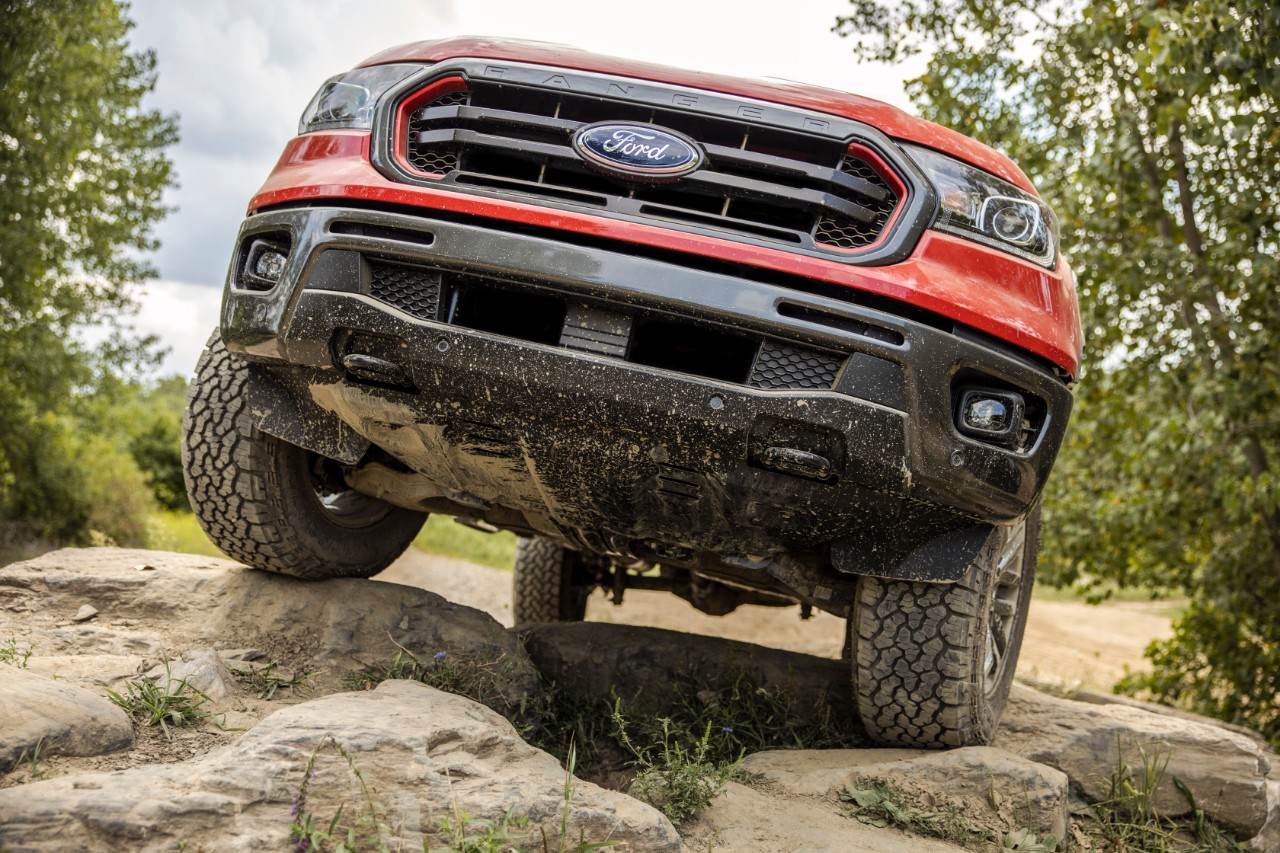 “When it comes to pickup trucks, [domestics] own the market,” Fisher said. Case in point, Ford Ranger took the top spot. It even beat the time-tested Toyota Tacoma, the bestselling model in the midsize category, which came in third.

Detroit manufacturers have come to recognize that pickups are now much more than just work trucks, added Fisher in an exclusive interview. “They are really luxury vehicles” for a sizable share of the market and, as a result, “the domestic companies really look at pickups differently” and are getting both features and quality right.

Getting It Right and Wrong 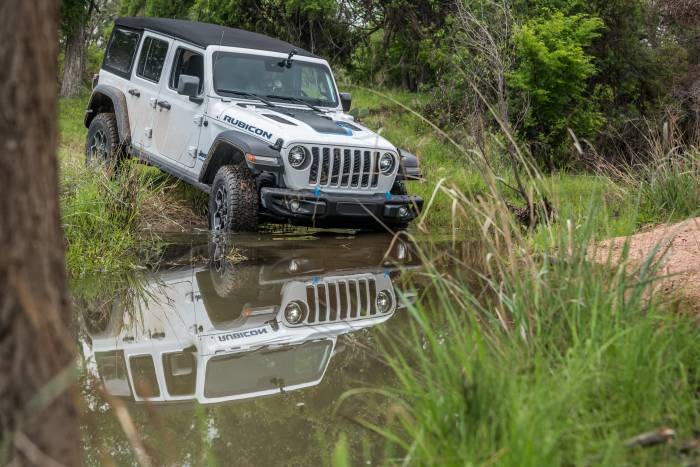 Domestics also are getting it right in the fastest-growing SUV segments, notably subcompact and compact mainstream and luxury models, the new study revealed.

That’s a significant turnaround considering the Japanese essentially invented many of these categories, with products like the RAV4 and the Honda CR-V. But, as demand has grown, U.S. brands like Chevy and Ford have generally addressed their quality and reliability problems.

Again, there were some exceptions. Jeep was one of the lowest-rated brands in the Automotive Reliability study, and Lincoln — which has migrated from sedans to crossovers — was the overall worst-ranked brand. 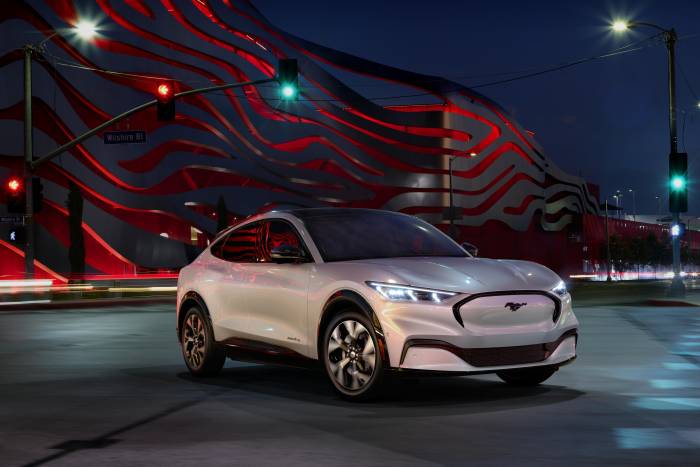 Another surprise, said Fisher, was in the emerging electric SUV segment. Ford had the only model to deliver above-average quality with the new Mustang Mach-E. Ironically, its conventional Mustang “pony car” ranked below average. 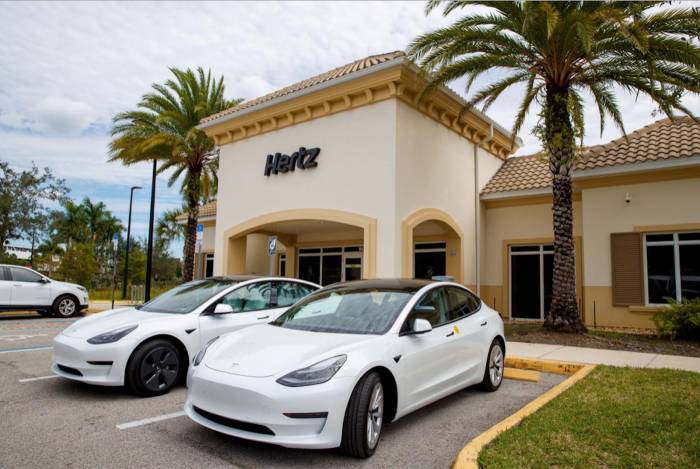 While Detroit manufacturers on the whole did well this year, the Consumer Reports study delivered little good news for Tesla. Despite making headlines with its fleet of Hertz-backed rental vehicles, Teslas continue to be plagued with problems.

And it isn’t just with their many high-tech features. The Model Y SUV, one of the worst-rated products this year, suffers from issues like faulty climate control, bad paint, and leaks.

Tesla ranked 27th among the 28 brands covered by the Annual Automotive Reliability study, with only Lincoln faring worse. Read a breakdown of Consumer Reports rankings here.

We talked to brands and searched the web to find the best Cyber Monday and Cyber Week discounts available on outdoor gear. See our top picks. Read more…

The Best Overlanding Gifts to Get Off Road

From off-grid car camping to 4x4 racing and off-roading, these gifts are sure to be a hit around, above, and behind the wheel. Check out our top gifts for off-roaders. Read more…

Up Next: Dodge Puts Down the Hellcat: Electric Killed the V8 Star

Quality used vehicles can get you to your adventure and back again. If you're shopping for a used vehicle, these 13 options are a good place to start.