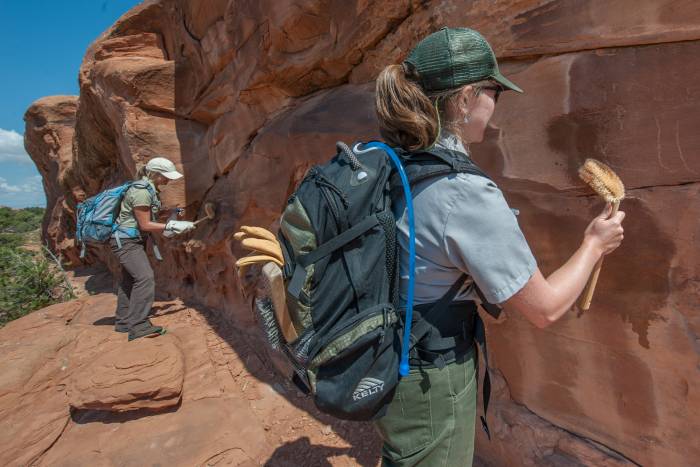 [leadin]Across the Western National Park System, vandalism of natural features, like rock faces and trees, has risen steadily in recent years, with more than 600 incidents reported since 2013.[/leadin]

The hardest-hit areas are near large urban centers — such as Lake Mead National Recreation Area, a mere 39 miles from the Las Vegas Strip.

Joshua Tree, located about two and a half hours east of Los Angeles, had to close portions of its historic Barker Dam in February 2013, and, months later, it closed Rattlesnake Canyon as well. Superintendent David Smith says the vandalism ranges from run-of-the-mill high-school-type inscriptions (“Nancy loves Carl”) to gang tags and unwanted works of “art,” like the bright blue giraffe hikers found on a boulder in February.

This year, there have been more than 150 incidents in the Pacific West and Intermountain West regions. Such vandalism is difficult to undo, though workers can scrape off paint with spatulas, or use chemical treatments, provided they won’t damage archaeological features.