‘It is as if he took a whole person, slashed it, and left us with a couple of limbs.’

A multi-industry coalition including Patagonia and the Access Fund sued the Trump administration Wednesday to block the decision breaking up Bears Ears National Monument.

On Monday, after the President ordered to reduce the size of Bears Ears by 85%, conservation, historic preservation, and outdoor industry groups responded in vehement opposition.

“The President’s proclamation is contrary to law, ignores overwhelming public support for the original monument designation, and dishonors Native American heritage and culture,” said Patagonia in a statement.

Why Patagonia Is Suing

Since 1906, sixteen presidents have used the Antiquities Act to designate 157 national monuments. These designations protect “historic landmarks, historic and prehistoric structures, and other objects of historic or scientific interest,” according to the Antiquities Act.

Patagonia and the coalition claim Trump’s action oversteps the powers granted by Antiquities Act and is therefore illegal. Rose Marcario, president and CEO of Patagonia, explained the company’s reasoning in an article in Time.

“By eliminating so much of Bears Ears National Monument, the President is putting over a million acres of land at risk for permanent destruction, and we aren’t going to just stand by,” she wrote. “Protecting public lands is a core tenet of our mission and vitally important to our industry, and we feel we need to do everything in our power to protect this special place.”

According to Marcario, Patagonia first and foremost wants to enforce the law. While the Antiquities Act gives the President authority to create national monuments, it does not explicitly grant power to undo previous presidents’ national monument designations. At present, only Congress has the right to undo a designation.

The suit also falls in line with Patagonia’s mission as a benefit corporation as well as its longstanding environmental and social values. The brand’s advocacy for Bears Ears and its national monument designation stretches back to 2013.

After Patagonia changed its website to display “The President Stole Your Land,” Secretary of the Interior Ryan Zinke publicly lambasted the move on Fox & Friends. 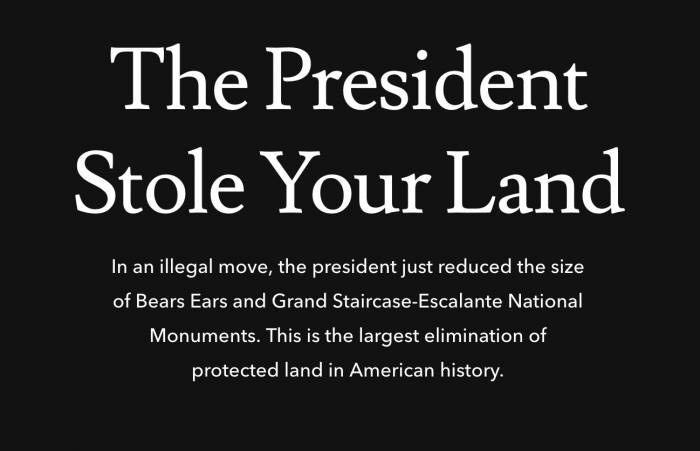 “There is not one square inch that leaves the federal estate. We do restore national forests, to a national forest, we restore wilderness. We open up our public land to the public for greater access,” Zinke said.

“We need to actively manage. I’ve always said that public use is important. Our lands are for the benefit and enjoyment of the people, and not special interest groups.”

“President Trump has literally dismembered our sacred Bears Ears monument that five Tribes have worked tirelessly for many years to protect in order to preserve our culture and way of life,” she said. “I heard yesterday someone say, ‘It is as if he took a whole person, slashed it, and left us with a couple of limbs.’ That is how I feel too.”

Adding voices to the coalition — and the lawsuit — were local and national organizations. Friends of Cedar Mesa focuses on land stewardship in San Juan County, Utah. And the nonprofit Archaeology Southwest strives to protect cultural artifacts and historically significant dig sites — for which Bears Ears is renowned.

But national organizations also stepped in. The Access Fund promotes noninvasive land use among rock climbers. And the Conservation Land Foundation and National Trust for Historic Preservation both work with the government to protect natural and historic sites.

The outcome of this coalition’s effort will have great significance for the future of other national monuments. It will likely set precedent on a legal gray area defining a president’s power to undo monument designations.

Up Next: Tribes Sue Trump Over Bears Ears