Explorer Ray Zahab and adventure partner Will Laughlin last week made a “west-to-east transect” of Death Valley (California) in roughly 35 hours. The 100-kilometer route included July desert heat, two mountain ranges, salt flats, rocky washes, and even an earthquake while en route! A rattlesnake encounter and huge nests of bees spiced it up. Head here for the full report. 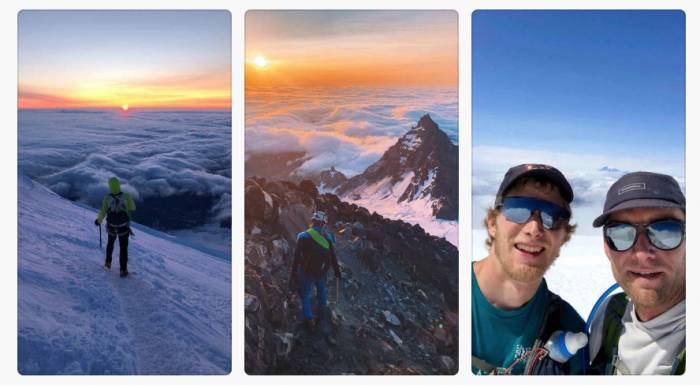 The “Cascades Trifecta” consists of climbing three of the highest peaks in the Cascades of Washington and Oregon — Mt. Rainier (14,411′), Mt. Adams (12,276′), and Mt. Hood (11,239′)  — back to back to back. Last week, the duo of Erik Sanders and Mike Chambers blasted through the three-mountain challenge in 22 hours, 53 minutes, and 21 seconds to set a new FKT on the challenging route. Check out Fastest Known Times for the details.

Two extremely young climbers made it to the summit of Mount Rainier on July 6. Bennett and Lochlan climbed with dad Joel Werdell and a team of four other adults over three days. The children knocked out a summit day that included a 3,000-foot climb and 9,000-foot descent! A cute detail – they code-named the climb “Cappy Love Heights,” after a favorite stuffed animal they wanted to bring to the summit. Goes to show that kids can accomplish monumental tasks. Congrats to the team!

More recently, Jacob Adoram completed a mind-bending paddle. He rowed across the Pacific Ocean from North America to Australia non-stop! Adoram became the second person to row across the Pacific from North America to Australia non-stop. The 7,145-mile journey took him 336 days. Learn more about these wild undertakings at ExplorersWeb.

A 36-year-old Denver man was killed when he was struck by lightning on Sunday afternoon while hiking on Bear Peak in Boulder County, Colorado. Police said that, although rescuers reached him by about 2:45 and initiated an air evacuation, he died later at the hospital. The strike also injured the man’s wife. Police said the strike did not hit her directly, but she suffered injuries from the electrical current from the same strike that hit her husband. Hikers and climbers: remember that lightning can roll in fast on the high peaks. Make a plan to get off mountains early, and beware of rapidly changing weather.

Cameron “Cam” Schaefer completed the Superior Hiking Trail in Minnesota last Thursday in a supported time of 6 days, 18 hours, and 45 minutes. To do so, he averaged more than 40 miles a day on the 310-mile rugged route. Check out our complete article on the SHT FKT.

Up Next: Free Gear Fridays: Hiking Backpack Giveaway With Gregory