Not only did Egan Bernal etch his name into the record books as the first Tour winner to hail from South America, but his win Sunday also made the 22-year-old phenom the youngest Tour champion since World War II. “I am the most happy guy in the world. I just won the Tour de France, and, yeah, I can’t believe it,” a smiling Bernal told NBC News at the podium ceremony.

Bernal bested 175 competitors from around the world on the 2,092-mile race that set off on July 6. Tour organizers also said this year’s podium was the tightest in the race’s 116-year history, with 2018 Tour winner Geraint Thomas finishing a close second and Steven Kruijswijk coming up third, just 1 minute, 31 seconds behind.

While the majority of a record number of climbers attempting K2 aborted their attempts this year, a handful of more elite climbers made successful pushes last week. Among them, Carla Perez became the first South American woman to summit both Everest and K2 without bottled oxygen. She climbed with guide Adrian Ballinger. Check out more details about climbers summiting K2 here.

Scientist Joep van Dijk needed to travel from Amsterdam from Boulder, Colorado, to start a new job. But he refused get on an airplane because of the large carbon footprint air travel creates. So he did it the hard way.

Van Dijk took 87 days for the 8,000-mile trip by rail, boat, bus, and bike. How much difference did it make? Van Dijk calculated that by foregoing the airplane trip, he reduced his trip’s carbon emissions by 95 percent. Read the full story here.

Salt Lake to Denali Summit by Human Power Only

In another tale of long-distance travel, two Salt Lake City men traveled 3,530 miles from Utah to the summit of Denali using only human power. It took Clay Hughes and Cody James 81 days to make the trip by bike, foot, and ski from their doors in Salt Lake City to the top of 20,310-foot Denali in Alaska. Check out Jayme Moye’s full article here.

If you’re going to aim, aim high! Last week, we learned about cyclist Josh Quigley, who is currently cycling around the world. Quigley sent updates from Kazakhstan last week, where he entered a remote stage of the trip across Asia.

Quigley calls his ambitious trek the “Impossible Dream” expedition, a multiyear push to set records and win pro-level races. After biking around the planet, Quigley aims to “become a world champion athlete and win the Tour De France” by 2026.

Hiker Drowns Trekking to ‘Into the Wild’ Bus 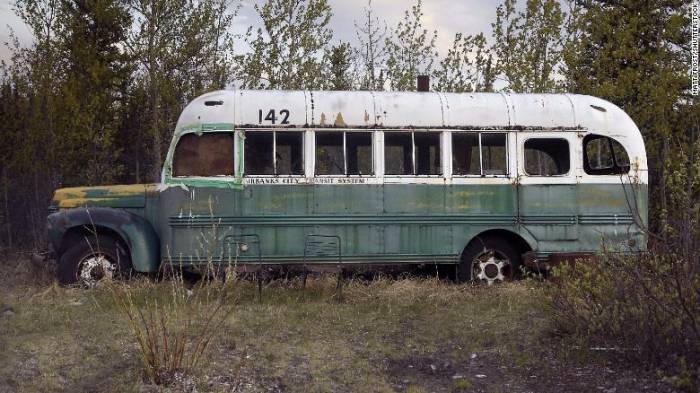 Every year, hikers in Alaska try to reach the infamous bus featured in John Krakauer’s book “Into the Wild.” And every year, rangers rescue a few of them off the Stampede Trail, which passes by the bus. Sadly, one woman drowned attempting to cross the rushing Teklanika River, less than a mile from the bus where McCandless lived.

The river, which plays prominently into the book, was swollen after recent rains. Veramika Maikamava was hiking with her husband, Piotr Markielau, on Thursday. The river swept the couple away, and Maikamava had died by the time her husband reached her. Read the whole story here.

A professional surfer was attacked by a shark in Florida Saturday and suffered deep wounds to his elbow. But even though his friends urged him to get it checked out at the hospital, he went to the bar instead.

Frank O’Rourke, 23, was paddling off a Jacksonville beach when the shark latched onto his elbow. After a brief struggle, he got free and made it quickly to the beach. “He immediately went to a bar ’cause he was like, ‘I got bit by a shark,’ and people were like, ‘I’ll buy you drinks!’ So he went and hung out at the pier,” his friend RJ Berger told News4Jax with a laugh.

While shark attacks are exceptionally rare, there have been a few in recent weeks. Check out the video below for some pretty wild quotes.

Up Next: Scam! Don’t Fall for the $169 Teardrop Trailer