Sometimes you can’t see the way, but you have to believe it’s there. That’s how climbers Paul Ramsden and Tim Miller tackled a bonkers new route in Nepal’s Jugal Himal region.

As chronicled by Mountain Equipment‘s new film, the two climbers met on Ben Nevis and quickly bridged the generational gap with mentorship and mutual trust. Soon enough, they turned their attention to the titular phantom line on an unnamed peak near Kathmandu.

Luckily for us, they filmed the whole thing. 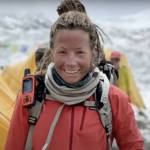 Kristin Harila could not secure critical documents to climb Shishapangma and Cho Oyu — the last summits standing between her and a seminal speed record. Read more…