The product lines look nearly identical. Both brands are based in Texas. But after a battle in court, one side is backing down. 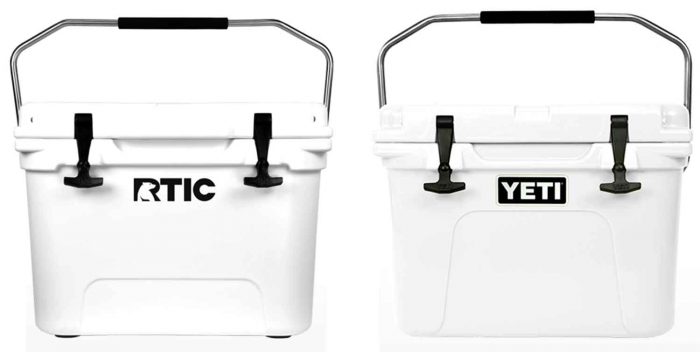 Marketed with tag lines that directly affront YETI products, the sales force at RTIC Coolers has never shied from calling out its competition. The company’s site offers side-by-side comparisons, RTIC vs. YETI on materials, size, design, and price.

It was a lucrative business move by RTIC, which in 2015 started selling lookalike coolers on a wave created by YETI. This week, it appears, that wave for RTIC has crashed.

A lawsuit in the United States District Court shows RTIC was too aggressive in its tactics. RTIC Coolers will make an undisclosed payment to YETI and also cease sales of many coolers and drinkware products in its line.

At a glance, the main thrust of RTIC’s business appears to be the old-fashioned art of the knock-off. Stand a YETI and an RTIC side by side — it takes a focused eye to see the differences. Both coolers’ contours, lid shape, size, capacity, and even the inverted-T closure tabs are almost identical.

Stark white with a logo stamped in the center, a passerby can easily mistake an RTIC for a YETI. Both are four-letter brand names, and the logos share a blocky look, all the way down to the strong “TI” appearing on the badges.

Launched in 2015, the products from RTIC are mirrors of many coolers and insulated bottles made by YETI. In side-by-side breakdowns, RTIC has worked to show how its coolers are similar to YETI’s but cost less.

That strategy worked for nearly two years. RTIC sold coolers and gained fans, including more than a million followers on its Facebook page.

But the news this week from the United States District Court appears to show that RTIC went too far. In a press release, RTIC stated it has entered into a settlement with YETI “for the purpose of avoiding the additional costs and uncertainty of continued litigation.”

RTIC will redesign its products and pay YETI. The company expects to roll out a new product line starting this spring.

Up Next: Action Works: Bill To Sell 3 Million Acres Of Public Land Dropped