The Olympic Games are finally upon us — and for the first time, sport climbing is included. Here’s all you need to know about climbing in the Olympic games ahead of Tokyo 2021.

If the 2020 Olympic Games had happened, it would have been the first time that climbing and a host of other sports would have been included. But alas, we all know what happened: the IOC postponed the 32nd running of the summer Olympic games due to the global coronavirus pandemic.

But good things come to those who wait. The summer Olympics will still be a year of firsts, and they’ll still be held in Tokyo, Japan, from July 23 to August 8, 2021 (sans spectators).

The Olympic Games are fast approaching. And for those who love rock climbing, it’s a new chance to enjoy the sport as it enters the world stage. Here’s what you need to know about climbing in the Olympics.

Results: Sport Climbing at the Olympics

Spaniard Alberto Gines Lopez reigned victorious on August 5 at the men’s combined final. Lopez finished first in speed climbing, fourth in lead, and seventh in bouldering for a combined score of 28 points.

Nathaniel Coleman, a 24-year-old U.S. climber, finished in a very close second with a combined 30 points (ranked first in the bouldering final, fifth in lead, and sixth in speed). And that leaves the first-place lead discipline climber, Jakob Schubert, who placed third overall with a score of 35 points.

Garnbret took first in bouldering and lead climbing, and fifth in the speed discipline (for a score of 5 points), pulling miles ahead of the other seven climbers who made it to finals and beating the silver finisher by 40 points. 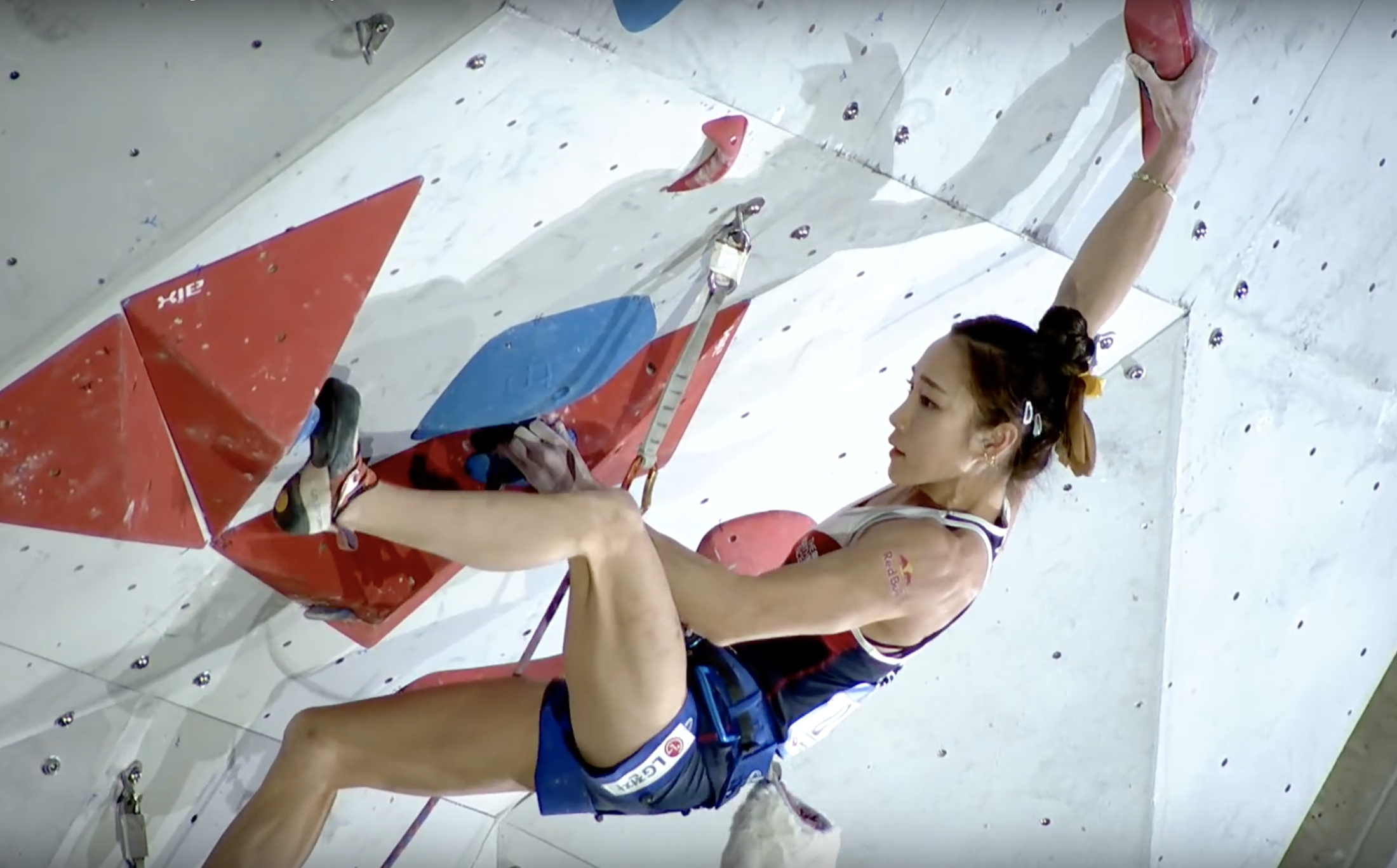 Rock climbing has surged recently as a professional sport and reaches a new peak at the Olympics. This year, athletes will compete in three disciplines that comprise sport climbing: lead climbing, speed climbing, and bouldering.

Like the IFSC World Championships and Bouldering World Cups, athletes are graded on their performance in each discipline. The medalists will be the three climbers that perform best across the three disciplines.

Climbing in the Olympics will begin on August 3 and run through August 6. The first 2 days will be for qualifiers, with the last 2 days reserved for the finals. It can get complicated to understand, so here’s how the scoring will work — overall, and for each discipline.

Before we get into the specifics of each discipline, it’s worth noting that for bouldering and lead climbing, all climbers start in isolation. That means they cannot watch other climbers attempt the route before they climb it.

The reason for isolation is that watching another climber on a route gives the observer extremely valuable information about the route. Climbers call information about a route “beta.” Having any beta before climbing a route can provide a clue that tips the scale of the climb. Thus, isolation keeps the playing field level, regardless of a climber’s place in the queue.

Speed climbing, on the other hand, takes place on a standardized route. All climbers have access to the route and are familiar with it, so isolation is unnecessary.

The lead climbing competition is held on 15m walls with a 6m overhang. Before the competition, all the athletes get 6 minutes of observation to study the routes. Then, each climber gets one attempt. There is a time limit of 6 minutes per attempt.

The climber that reaches the highest hold on the wall is awarded the top rank. The holds are numbered and function as points in a system. For example, the 20th hold on the wall would equal 20 points. When an athlete falls, they are recorded on which hold they fell (giving them a score).

In bouldering, athletes compete to finish as many problems as they can in as short a time as possible. The qualification round has a total of four problems (different problems for men and women) with a time allotment of up to 5 minutes. The finals round has three boulder problems.

Each boulder problem has starting holds, zone holds, and a top hold. A zone hold is a way to measure climbers that reach a midpoint in the problem, but not the top. (Climbers who reach zone holds get partial credit.)

Topping a boulder problem means an athlete reaches the top hold, places two hands on the top hold, and maintains control. To “flash” a boulder is to top it on a first attempt.

At the end of the round, climbers are ranked based on most boulders topped, most zone holds reached, and fewest total attempts. Their score (and chances of getting on the podium) increases if they top or flash a problem.

The aim of speed climbing is to scale a 15m wall (same as lead climbing) as quickly as possible. Athletes go head to head on identical routes in two “lanes.” Each athlete gets two attempts to record their fastest possible time.

Eight athletes will compete in the finals. Here, speed climbing is a single-elimination tournament-style event. Athletes are initially ranked 1-8 based on qualification results. Then, climbers face off in quarterfinal matchups.

The winner of the final race wins the speed discipline. The slower climber places second in the discipline.

Overall Scoring: How Climbers Get on the Podium

In essence, each of the three disciplines is one stage of the competition. And to win at the Olympics, a climber needs to do well in all of them.

Climbers will earn a ranking in each discipline through their competition, with first place being 1, second being 2, and so on. Scorekeepers will then multiply the results of all three disciplines together, with the lowest score overall winning.

If there’s an exact points tie, the athlete that placed better in two out of three disciplines is ranked higher. If you still have questions, check out this explainer from the Olympic Games.

Watch Climbing at the Olympics

For the Olympic qualifiers, each country was allowed to have a maximum of two women and two men, totaling four athletes. Only the U.S., France, and Japan reached the max total of four athletes competing. Twenty athletes per gender (40 total) will participate in the qualifications, with the ranked top eight advancing to the finals.

Here are the U.S. climbers competing in the Olympics:

Bio: Started climbing when she was a teen; four-time Youth Bouldering National Champion; qualified for the Olympics at the 2019 IFSC Combined Qualifier in France.

Bio: Started climbing at age 9; won consecutive U.S. bouldering titles from 2015-2018 before finishing second in 2019 and winning again in 2020; qualified for Tokyo at the 2019 IFSC Combined Qualifier in France.

Bio: Born to two climbing parent icons (four-time World Cup Champion Robyn Erbesfield and Didier Raboutou), Raboutou has been climbing since she was a child. She became the youngest person in the world to climb a 5.14b at age 11. Raboutou was the first U.S. climber to qualify for the Olympic Games.

Bio: Ten-time Youth National Champion; qualified for the Olympic Team in March 2020 with a surprising performance at the Pan-American Championships in L.A. Fun fact: both Colin Duffy and Brooke Raboutou are from Boulder, Colorado, and train at the same gym.

It’s not just the USA team you should keep your eye on, either — there are also plenty of serious climbers from abroad who are contenders for the Olympic podium. Here are the ones to watch.

If there is a favorite in the men’s field, it is Adam Ondra. Widely regarded as the best overall climber in the world, he’s the person to beat.

Bio: Started climbing at age 6; first person to climb 9b+ and 9c, which includes his first ascent of “Silence,” a 5.15d, in 2017; seven-time World Cup gold medalist. Ondra was one of the first athletes to qualify for the Olympics at the 2019 IFSC Combined Qualifier in France. He has won both lead and bouldering World Cup Championships, and he is frequently lauded as one of the best climbers in the world.

The women’s favorite, Janja Garnbret will also be tough to beat.

Bio: Like Ondra, Megos has also climbed the hardest grades in the world, including 5.15c and 5.15d; he was the first climber to onsight 9a+; holds multiple Youth World Cup titles; bronze and silver medalist for Lead World Championships in 2018 and 2019.

Bio: Began climbing at age 4; has 11 gold medals and 12 silver medals from Bouldering World Cups; set a British women’s speed climbing record of 9.141 seconds in 2019; qualified for Tokyo after making the finals at the 2019 IFSC Climbing World Championships.

Bio: At age 14, she became the second-youngest climber to complete a 9a (5.15); at age 19, became the second woman in the world to climb a route graded 9b; qualified for Tokyo at the 2019 IFSC Combined Qualifier in France.

Bios: Two brothers, Bassa and Mickael Mawem, both climb for the France national climbing team. Mickael qualified for the Olympics first at the 2019 Climbing World Cup; Bassa qualified at the IFSC Olympic qualifiers tournament in France. Bassa holds a silver medal from the 2018 World Championships; Mickael won gold at the same world championships.

View the full roster of climbers in the Olympics.

How do 13 pitches of climbing up to 5.14d sound? Oh, and it's the tallest artificial multipitch route in the world. Read more…

The Olympic Games: Schedule and How to Watch

*4-day window with alternate dates based on conditions

Find the 2021 Olympics on NBC on cable, and Amazon, Apple, or Roku TV. Or, watch live and recorded Olympic competitions online.

Get ready to rep your home team at the Olympics with The North Face's International Collection athlete-inspired apparel. Read more…

Up Next: Alex Honnold, Tommy Caldwell to Teach Rock Climbing on MasterClass