Big City Mountaineers, a nonprofit that gets youth outdoors, has been running one vital aspect of its programming for 16 years. This year, we joined the trip to get a hands-on look at its impact.

What’s better than getting the opportunity to hike, climb, and summit a mountain? To earn it first — and to know that you’re helping give others the same experience. That’s the concept behind the nonprofit Big City Mountaineers’ (BCM) Summit for Someone program.

This year, I was invited to take part myself — from raising funds to bagging Longs Peak! We’ve covered BCM’s Summit for Someone program before — all the details and program goals. But what is it like to actually go through the process?

Check out our GearJunkie Summit for Someone trip report. 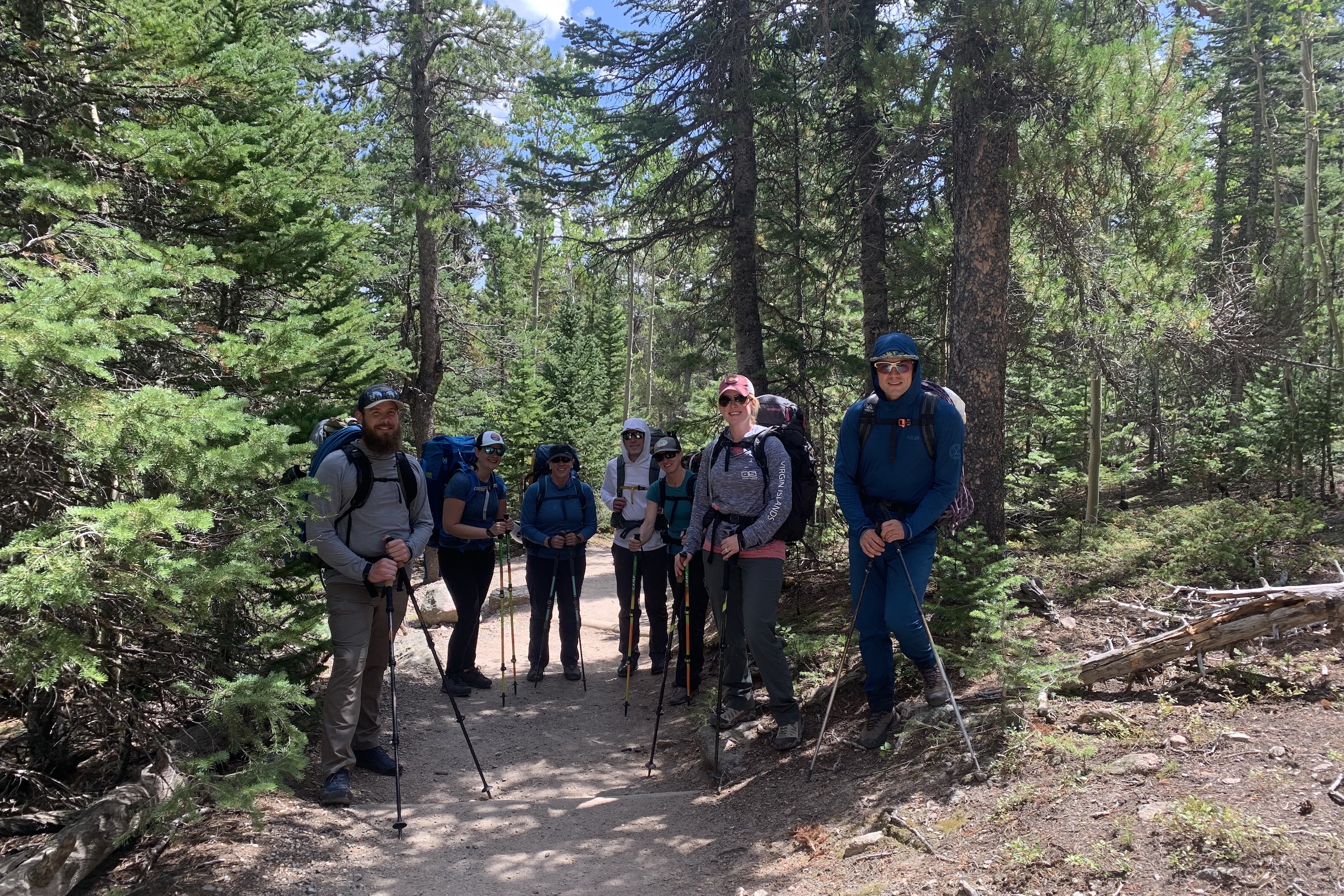 This year, six people (seven including myself) chose to fundraise and participate in the Summit for Someone program. For 2021, BCM partnered with Colorado Mountain School to lead this year’s Longs Peak trip. The six individuals all came from different backgrounds, had different outdoor skills and experiences, and became involved with BCM in their own ways.

Because of COVID and other factors of need for the organization, BCM set the fundraising goal for each person at $2,000. When I asked how each participant heard about BCM, answers fell across the board.

“I was trying to find something local, because I moved here 3 years ago and wanted to be involved in my community,” said participant Matt Hershey. “I got into the outdoors when I was really young, and thought it would be the coolest thing to share that, for kids to have that exposure. And I’m hoping to volunteer too.”

A few other participants on the trip actually heard about it from each other, like Hershey’s sister, Jennifer, who fundraised and joined on the trip along with her brother, and Denver couple Brie and Ryan Pate. Together, the group raised over $25,000 for Big City Mountaineers.

Once the group reached the intangible summit of their fundraising goal, they met in Estes Park to prep for the physical summit ahead. For this year’s participants, that meant dusting off and setting up tents, brushing up on Class V climbing skills, scouring weather reports, and refamiliarizing themselves with the plethora of dehydrated meal options. 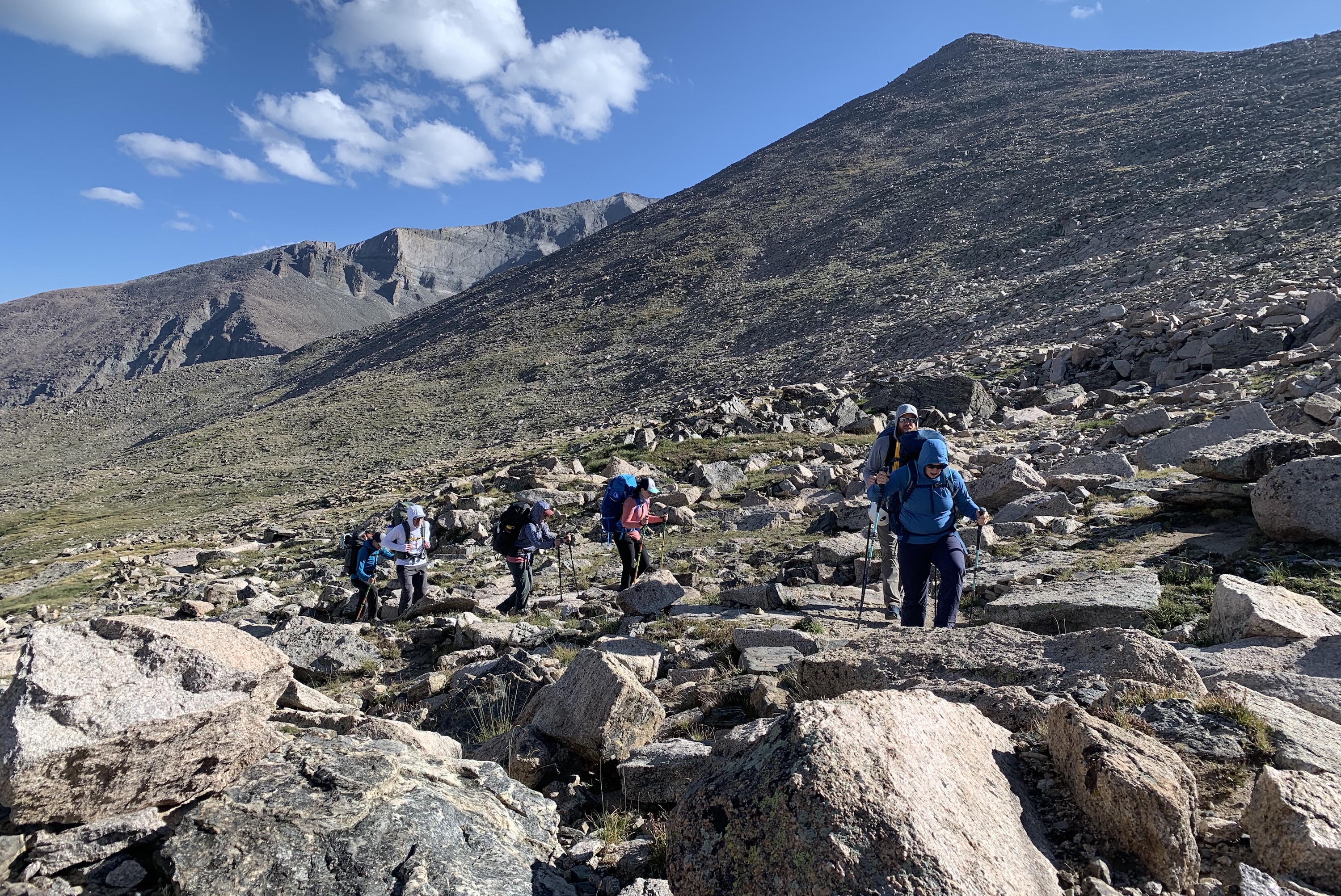 The next morning, we were off to Longs Peak to tackle the 7-plus-mile, 3,000-foot-elevation hike into the infamous Boulderfield, a rocky, alpine plateau nestled just beneath Longs Peak at 12,400 feet. The group chugged along in good spirits, around switchbacks, up slopes, and over the boulder-scattered Granite Pass.

The next morning would be an early alpine start summit push, in order to be off the peak by mid-morning. At 5 a.m., we boiled water, donned layers, and made our way up the Cable Route. Mid-scramble, I asked participant Jeff Weule what the most rewarding part of the trip was so far.

“I like that this is something I never would’ve pushed myself to do otherwise,” he said. “And to know that this [program] will give kids a similar experience.”

A few hours later, we summited.

“This is the hardest thing I’ve ever done in my life,” participant Michelle Bogosh said upon finishing the most technical part of the climb. “But I did it; we did it.”

History of Summit for Someone

Big City Mountaineers began its Summit for Someone benefit climb program in 2006. This year marks the 16th year of the program. In past years, teams have gone to the summits of Grand Teton, Mt. Rainier, Longs Peak, Mt. Hood, Mt. Whitney, Mt. Baker, and more.

In its first year, Summit for Someone raised enough funds to give over 200 teens participation in BCM programming. In its second year, it tripled in size, becoming the largest benefit climb program in the country. BCM used to run multiple Summit for Someone trips each year but then scaled back to ensure that each trip had as great an impact as possible.

“Traditionally, we’ve focused on [trips] being a transformational experience,” said BCM’s Director of Strategic Partnerships Megan Aranow. “And we want to also recognize that time spent outdoors should be restful … it doesn’t need to focus on challenge exclusively.”

That goes for both the Summit for Someone trip and Big City Mountaineers youth trips. In essence, it’s sometimes more about the journey, not the destination. And a 14,000-foot peak is a perfect example: You can spend 4-10 hours climbing one, and maybe 10-30 minutes at the top. (It is fairly windy up there!)

“I have been thinking about the contrast between how difficult it felt in the moment — the hiking and climbing was challenging — but then how rewarding and fulfilling it is in the end,” Brie Pate remarked after the trip. “Knowing that it was to support BCM was a huge motivator.”

Youth without access to the outdoors are able to join BCM’s programming solely because of funds raised through Summit for Someone. BCM wouldn’t exist without it.

The Summit for Someone program sometimes raises as much as a third of BCM’s total funds for any given year. “Over 25% of all BCM’s financial resources come from this program, so it’s significant,” Aranow shared with us.

And so was the experience.

Big City Mountaineers’ programming focuses on getting youth from underrepresented communities into the outdoors on fully outfitted trips. BCM runs trips nationwide, coordinating with youth agencies in various cities, including Boston, Miami, Minneapolis, Denver, San Francisco, Portland, and Seattle. Learn more, and how to get involved.

Marathons have always been a popular challenge. But for 2021, they seem to become an especially historic event. Read more…