Home » Outdoor » Hunt / Fish » A Borrowed Mantra for a Hiker-Turned-Hunter: Hunt Your Own Hunt

Over the course of GearJunkie editor Nicole Qualtieri’s 2020 hunting season, she found herself repeating these words: Hunt your own hunt.

I earned my first stripes as an outdoorswoman back in the summer of 2014, when — on a streak of impulse and perhaps dim-witted fortitude — I set out to hike a northern section of the Continental Divide Trail alone. In the 150 miles I walked on that trip, I met a few venerable border-to-border power walkers. And I picked up a few tips along the way that continue to serve me.

“Hike your own hike” is a mantra that any long-distance hiker will parrot at any moment, on the trail or off. My initial goal was to hike from Yellowstone to Glacier, but I ended up having to adjust distances due to knee problems. In the end, I found more joy in the shorter sprints around the mountains than the long ones, anyway. I adjusted expectations, and, in short, it worked out. I hiked my own hike.

With two back-to-back fall hunting seasons that were difficult for a myriad of reasons, I found myself coming back to this beloved mantra with a twist. “Hunt your own hunt” swam in a nearly subconscious manner through my thread of thought.

2 Seasons of Change, With New Joints in Between

Last fall, those knee issues blew up in full. My beloved solo hunts seemed to falter in the wind as I contemplated the reality of shooting then packing out on my own. I went with friends, helped when they tagged out, but alas, it wasn’t my year.

I ended with a bowl of tag soup, an empty freezer, and blinding pain in my knees. What I did do was go back to my doctor and lament the end of two of the joints we most rely on, and he agreed to a solution.

In 2020, I switched out both knees for new ones. For clarity, I’m 36. I come in a little under the wire for this procedure. But it’s already changed my life. Advanced osteoarthritis stood between me and everything I loved to do. The first knee went under in January, the second was delayed 5 weeks due to COVID, and I switched it out in late May.

The setback pushed deep into my recovery plan for the summer. But by archery season, I was able to hike 3 miles and gain a bit of elevation, bow in hand. Realism abounds, however. And even if I had gotten a shot off, packing out would have been out of the question.

The Duality of Success

This year, two competing ideas of success coexisted: the tangible success of notched tags and meat in the freezer, and the success of simply being able to move, to enjoy, to see, to hunt. The Emersonian iron string of trusting myself resounded on that specific spectrum of success: I was able to have both kinds, albeit in doses.

This year, I put notches in my first pronghorn tag, and I dragged the buck about 1,000 yards back to the truck on a $16 kids’ sled I bought at Murdoch’s. I also began to get my mountain legs back. I hiked up to ridges where I could glass. And I went into spots filled with opportunities that I decided for one reason or another that I shouldn’t shoot. Many were in spots I found myself still contemplating the pack out.

When I was in physical therapy, my PT and I found that I’d imposed a lot of subconscious limits on my body, out of protectionism. I uncovered many more of those limits as I moved through sage and hill. And I began to navigate a new and more whole physical self. 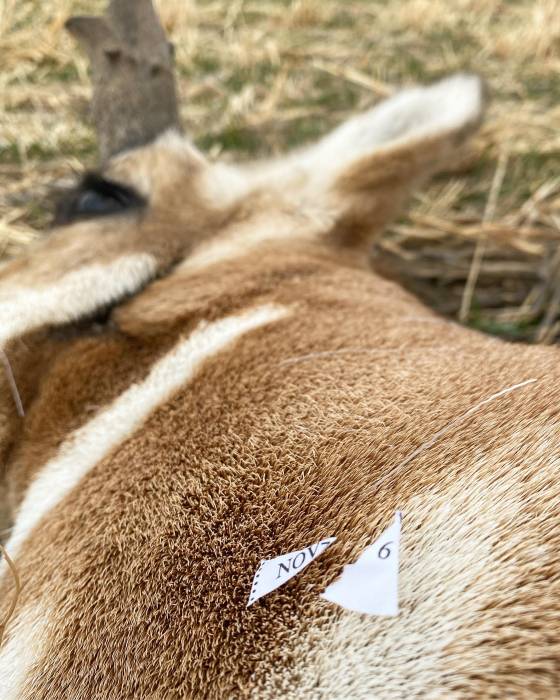 My pronghorn success came after 8 days of what felt like missed opportunities, be it an untenable shot distance, critters crossing onto private land, or some unknown thing — hello, danged coyotes — causing a ruckus as I stalked in.

The weather was hot, hitting the mid-70s for a week straight in early November. I hadn’t showered in days, I was camping in my pickup, my young knees were sore, the rut was not yet activated. Nothing felt good or right. And COVID had laid waste to our usually grand and communal deer camp. I just wasn’t enjoying the hunt. I felt the pressure of last year’s tag soup season, and I had 2 days left to hunt pronghorn.

My friend Sam and I hunted for a day together; we had some close calls. I was ready to give up on the antelope effort in exchange for a focus on mule deer. Sam — in all her zen optimism — said I should keep going. Still, I waffled.

The next day, we drove out to hunt deer. When we got to the spot, I looked at her and said, “I think I’m going to hunt pronghorn.” She shot me a knowing look, and we exchanged words of good luck. We parted ways, off on our own hunting adventures.

I still had tags to fill and shortening time to spare. The next weekend, I climbed up to a ridgeline in a rocky bend of mountains dressed in tall sage, and I bumped a big group of does and some small bucks at the highest point. They had tucked themselves into a hidden pocket in the landscape. At 130 yards, I watched them, they watched me. They relaxed, settled in, and grazed.

There are some moments I truly feel like the hunter I am setting out to be. These are the moments in which I study landscape, consider the timing, think about where I’d head if I were a deer, and head in that direction. This was one of those moments. I had hunted, and successfully.

Could I close the deal? This was the biggest ask I’d made of my legs yet. Shot-wise, I could close the deal and easily at that distance, but I wasn’t sure that packing out from this position was the best idea. It was a decent vertical drop and more than a mile back to the truck; I’d likely have to come back up here for the second round of packing meat. My new legs didn’t seem up for it. I settled my gun, sat back, and took stock.

I watched each deer crest the horizon and drop down, then I climbed the rest of the ridge and sat for a while. The herd disappeared into other folds of the land. I could see two orange-vested dots walking an old two-track far below me. I walked a high ridgeline trail, blanketed with deer and elk scat. “They too come here for the view,” I thought. I sat, folded my new knees to my chest, and watched this sage-filled world for awhile.

Hunting My Own Hunt, Finally

It’s been nearly a month since the Montana general big-game season closed, and I can’t say disappointment never caught up with me. I wanted so badly to break away from the physical and mental struggles of this oddball year and find new kinds of success around each corner.

My own self-awareness knows the former competitive athlete within has a difficult time discerning tangible success from the intangible kind. I was a “winning isn’t everything; winning is the only thing” kind of player. Some days, I still am. It’s a mentality that both serves and devastates. It inspires me to push harder; it castigates me when things go awry.

Long-distance hiking pushed against that mentality, and it pushed against it hard. Finishing became winning. Adjusting my expectations became another kind of win. Hiking my own hike was all that I learned to focus on.

When I hunt, all these internal struggles and lessons come along, snapped in with the hip belt of my hunting pack. And each hunt isn’t so different from those long and arduous hikes. One step at a time, each hunt its own opportunity for something new, each potential shot measured against a few questions: Am I ready, physically, emotionally, and within my own human spirit? Is this a good and ethical shot for me to take? And is this the right animal?

I do pass on some shots for reasons beyond explanation and others for reasons easily explicable, and I did both this year. This was a detriment to my freezer and my internal notions of legitimate success. The castigation of the athlete within came up against the sensibility of what may be the better, kinder, more grounded part of my ever-learning human nature.

In a year mired with so much uncertainly and physical recouping, I still managed to hunt my own hunt. Success, in full.