If there’s anything predictable about fishing, it’s that weather can be unpredictable. With the Old Town BigWater PDL 132, you can hit the water even when conditions are less than ideal.

A lot of cheap kayaks lack the backbone to endure choppy or windy conditions. And you don’t want to learn this when you’re fighting your line and trying to steady your kayak.

I’ve kayak-fished off the shores in the Gulf and around the Mobile Bay in kayaks that had no business doing so. Sure, they worked fine when the water was glass, but with any bit of wind, they made my fishing a delicate balancing act.

I recently had the privilege of testing the Old Town BigWater PDL 132 on Maine’s Moosehead lake. The lake was anything but calm, and I was impressed with how well this kayak made light work of the choppy waters.

In short: The Old Town BigWater PDL 132 has the hull size to withstand reasonably rugged waters, so you can focus on fishing instead of trying to stay afloat. Ample storage and tackle accessories like the gear tracks should appeal to serious anglers, and the instant forward or reverse pedal drive makes operating this kayak in big water or tight spaces a breeze. 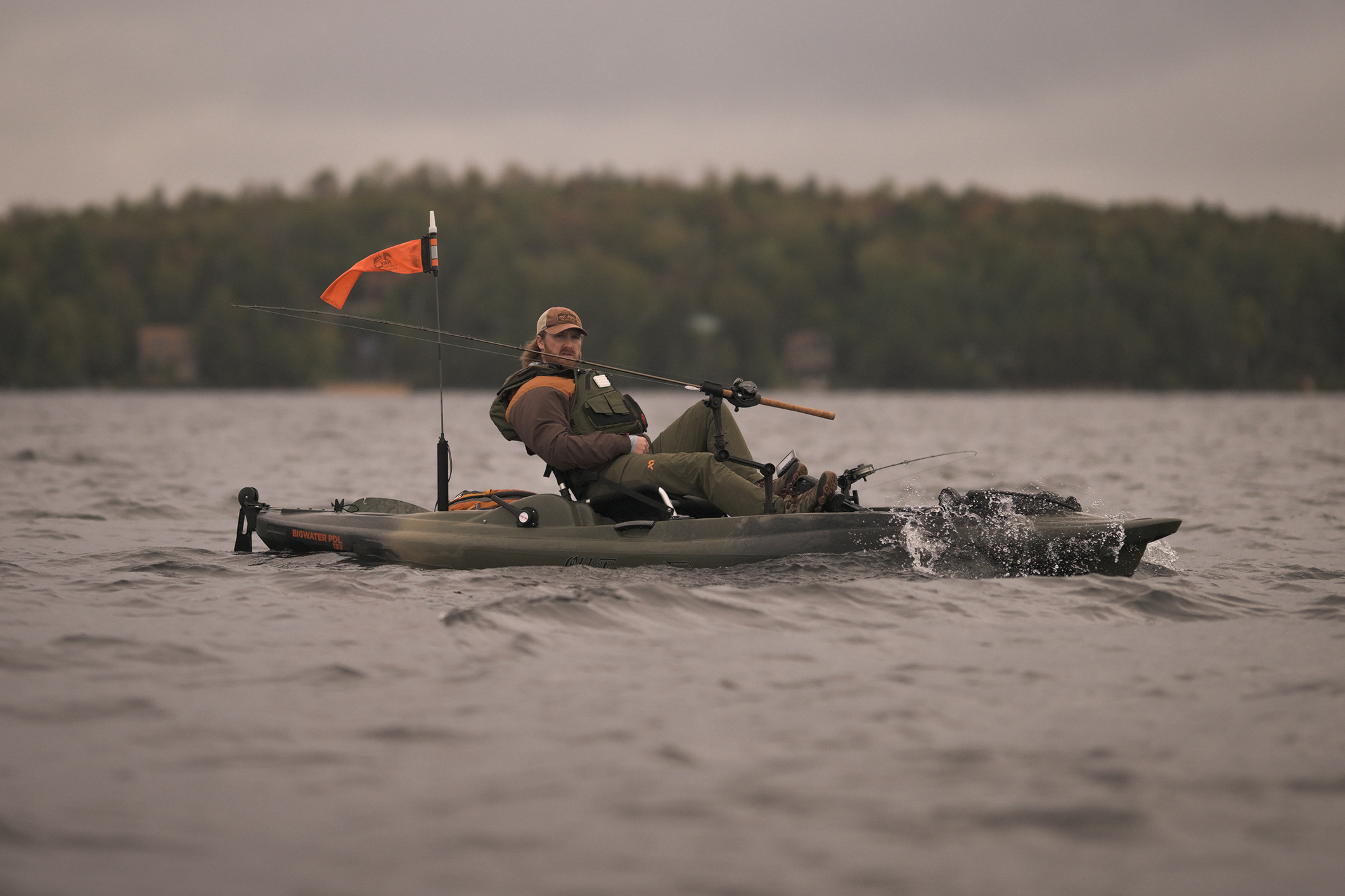 A few weeks ago, I spent a day trolling Maine’s Moosehead lake for landlocked salmon. The PDL drive system made it easy to navigate the kayak while rigging a fly rod, and the forward and rear-facing rod holders my conventional setup out of my way while pedaling.

Moosehead Lake is huge; far too large to cover in a traditional kayak. However, the PDL drive system on the BigWater made it easy to cover ground, and its 13’2” length helps maintain a respectable speed.

Because I was trolling, I obviously needed to stay moving. Even after 4+ hours of pedaling in choppy conditions and trying to maintain a steady trolling pace, my legs weren’t fatigued. If you’re new to pedal drive kayaks, you’ll find that pedaling on the BigWater becomes second nature after a few hours.

The conditions during my fishing trip were less than ideal, but the BigWater’s heft and tri-hull design took the chop in stride. It felt rock solid on the lake with minimal rocking, and I never felt like it was in danger of tipping. This doesn’t mean you won’t get wet, though. After all, you are kayak fishing, and I received more spray than I anticipated.

I’ve taken less sturdy kayaks into coastal waters, and I would have zero hesitation depending on the BigWater for ventures where I might be hesitant to launch. 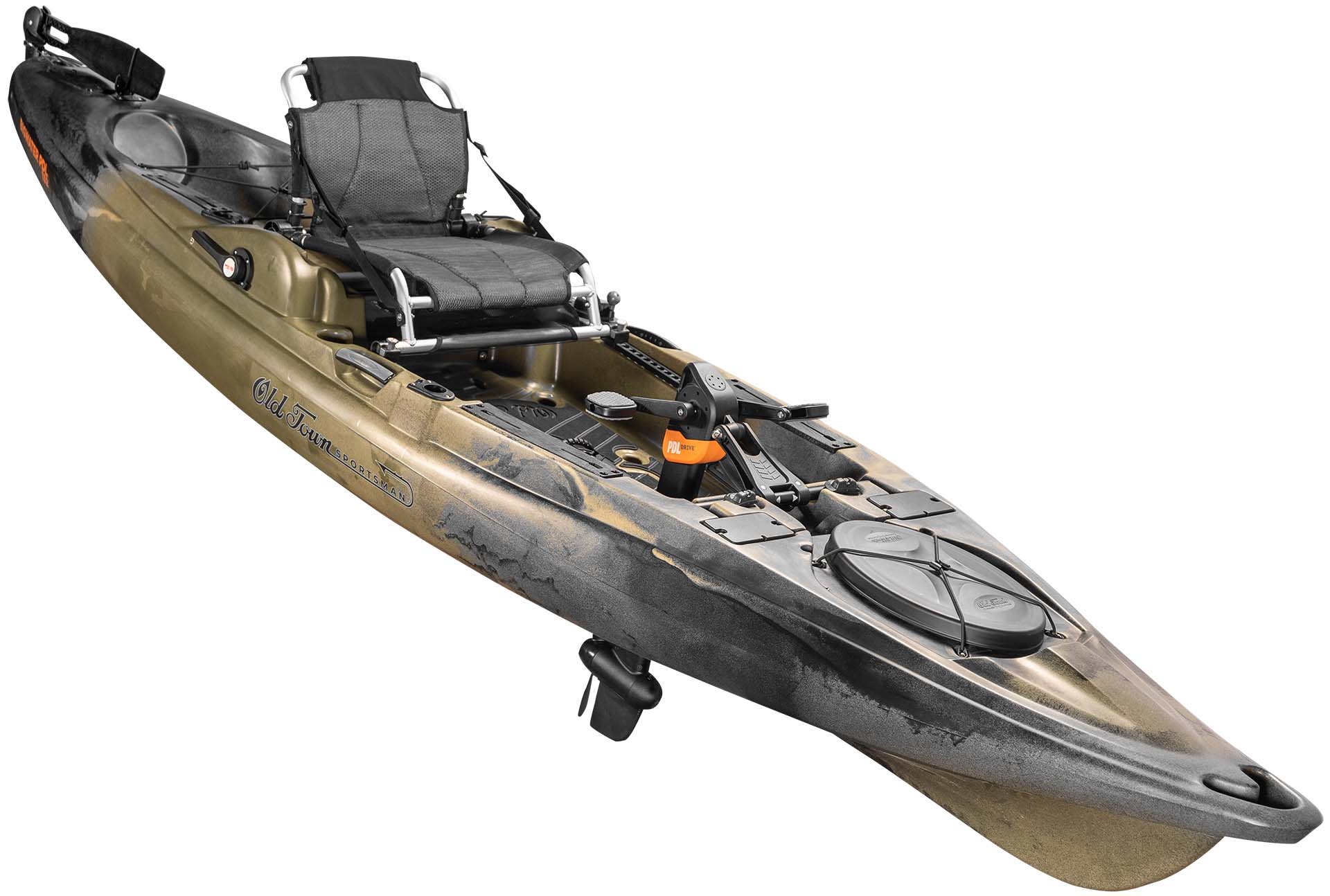 While some might view the size of this craft as a full upside, the BigWater’s heft makes it cumbersome to store and travel. It really is, essentially, a boat.

At just over 13 feet and around 100 pounds, this kayak is difficult to cartop by yourself and flirts with needing a trailer if you don’t have a capable truck bed and extender for hauling.

I also noticed a tiny bit of slack while pedaling, particularly when I attempted to maintain a consistent speed (around 2.5 mph), but not enough that it would deter me from buying it.

If you have no problem fishing all day, the BigWater’s efficient pedal drive system, storage, and comfortable chair make it easy to fish from dark to dark. You can easily rig your preferred fish finder thanks to the built-in accessory tracks.

Storage under the seat and at the bow and stern provide plenty of space for tackle and extra layers. And the dry storage in the sealed bow hatch is a nice touch. So, for those JIC anglers who pack anything they might need, the BigWater will hold it.

Spend any time on a kayak, and you’ll appreciate a good seat. The fully adjustable Element seat is super comfortable and breathable, so whether you’re fishing long days or in warm conditions, the seat won’t sweat you out of your clothes.

Unlike other kayaks, the BigWater’s instant reverse makes it easy to avoid drifting into heavy cover when you’re trying to land a fish. Simply pedal backward to move the kayak in reverse. And even though this is a long kayak, its controls made it smooth and nimble to navigate. 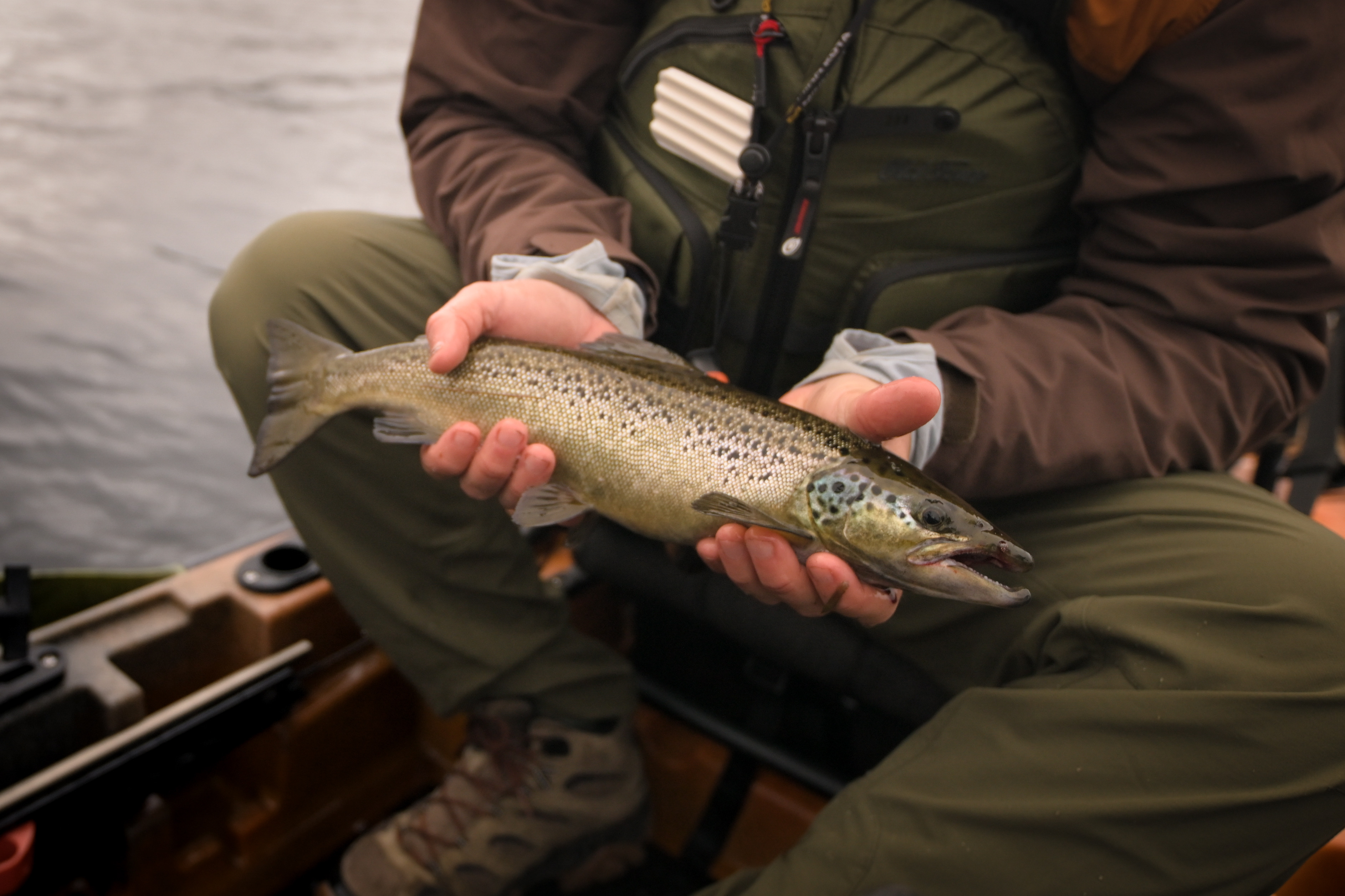 Whether you’re fishing coastal waters or variable conditions, the BigWater’s design makes it easy to focus on catching more fish. Serious anglers will find little to gripe about, especially when it comes to storage space. And if you want to get the most from your kayak, this one has the space to hold a deer when hunting season rolls around.

Up Next: First Deer Legally Hunted in Chicago in Over 150 Years