Fishing is not the first thing I do in new waders. In fact, some of my waders are never paired with a fly rod because they’re for work, not play.

I shoot photos and footage for outdoor stories, and I put waders through the wringer when I run, crawl, and roll around in the river. I need workhorse waders that tolerate more than just standing in a current waving a big stick. 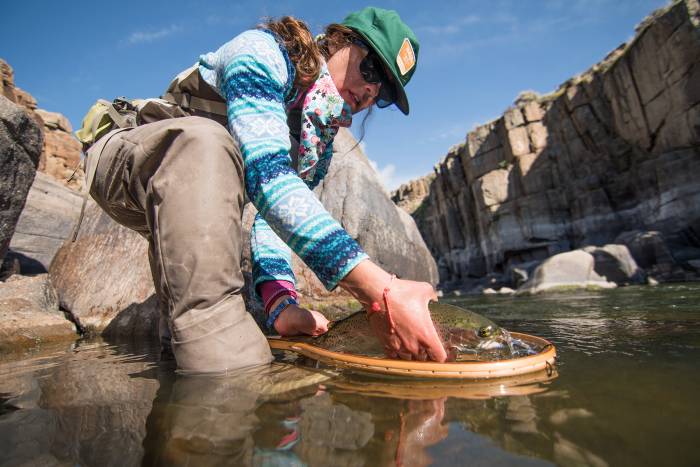 While shooting national monuments for a public lands initiative with the National Wildlife Federation, I use the Redington Women’s Sonic-Pro ($299.99) as my pair of workhorse waders.

Artemis sportswoman Kara Armano is with me at the Rio Grande del Norte National Monument. She’s in the same waders.

We hike down into the gorge where the river is deep beyond the boulders. It’s also cold. The line guides on Armano’s rod are frozen. She clears the ice and casts while I shoot, contorting into a variety of positions as I go.

Redington built the Sonic-Pro especially for women. Made from four-layer waterproof-breathable fabric, the wader has many of the same attributes as popular models for men. But Redington cut them to fit women better.

Stretch side panels allow anglers to move in and out of this wader and add comfort on the water. Minimal pockets reduce bulk, and the stretchy mesh back panel moves with the body while casting and crouching. 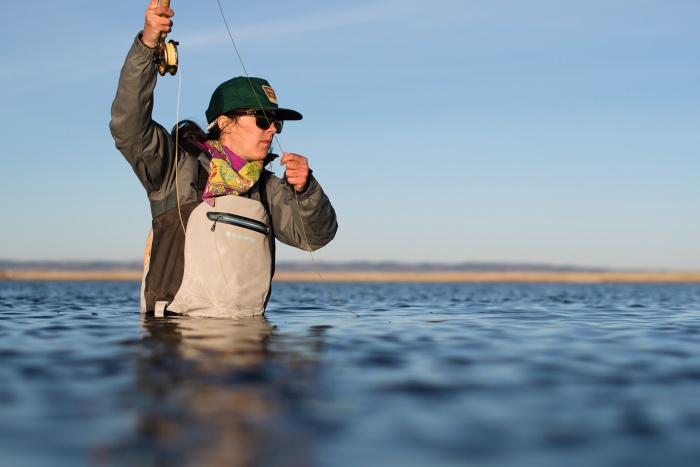 The fleece. I’ll say it again because it’s crucial: The fleece.

On the front of their four-layer waterproof-breathable fabric, the Sonic-Pro waders have a panel that opens on either side like an old-school winter muff. Inside the panel is fleece to keep you warm. And it’s awesome.

Between video shoots, I stick my hands inside the panel to warm up. I’ve gone without front panel fleece for years, putting my hands under my armpits on cold days. I’m done doing that.

The waders perform as expected, keeping me dry while logging lots of hours with the camera or the rod.

One nice plus is that the waders compress down to a fairly small package, so mine often end up in luggage. The Sonics bundle into a mesh throw bag, leaving room for wading boots and everything else you shove into your carryon.

In addition to the fleece-lined front panel, there are two other chest pockets. One is water resistant and detaches so you don’t have to bother with it when it’s empty. I detached that one right away because I don’t shoot with my phone when I’m working, and all of my cameras are bigger than a phone.

There’s also a mesh pocket with key attachment so your car-starter doesn’t end up in your neoprene bootie or, worse yet, the river. 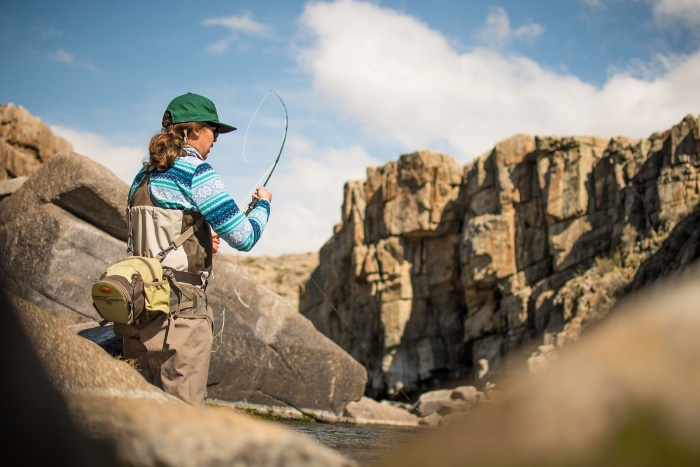 While the Sonic-Pro does have some measure of stretch, the flex just isn’t enough across the knees and through the groin. Less flex also shortens leg span when scrambling over boulders, and I drop to my knees often for a good shot.

Waders with no give slow me down because they limit the movement of my lower half. Fortunately for Redington, this problem could easily be remedied with gusseted stitching at the knees and groin.

That said, I need more flexibility than the average angler due to the nature of my photography and videography work. But the extreme test does shine light on a way that Redington could improve these waders for the future.

In the end, if I have to choose fleece or flex, I choose fleece. I want flex, but I need fleece on winter shoots to keep my hands warm and usable.

For most female anglers, the Redington Women’s Sonic-Pro is a comfortable option that will work in many situations. I’d love to see a little more flex, but overall they performed admirably and hit a middle-of-the-road price ($299.99).

–Outdoor journalist Kris Millgate is based in Idaho Falls, Idaho. See more of her work at www.tightlinemedia.com