We traveled a long way to meet up with Colorado native and socially conscious business owner Caleb Spear to talk about good ideas, natural disasters, and the desire to give back. 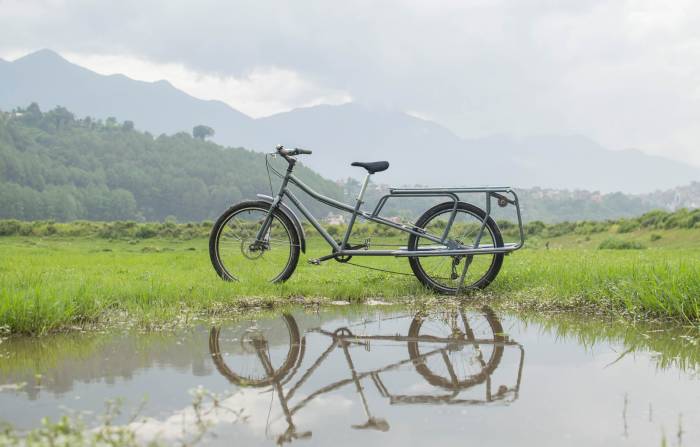 Caleb Spear is not your typical entrepreneur. His profit and loss statement has a third column used to record another important metric — his positive humanitarian impact.

A native of Colorado, Spear and his wife, Emily, moved to Nepal in 2013. Determined to start a socially minded business, they spent considerable time in the countryside trying to assess the needs of rural Nepalese.

One day, they helped a farmer shell corn by hand. After reflecting on their bloodied thumbs, they realized there had to be a better way. Spear’s solution was to add a power takeoff (PTO) drive to the back of a bicycle. The pedal-actuated PTO could power a corn sheller, wood saw, or even a washing machine. 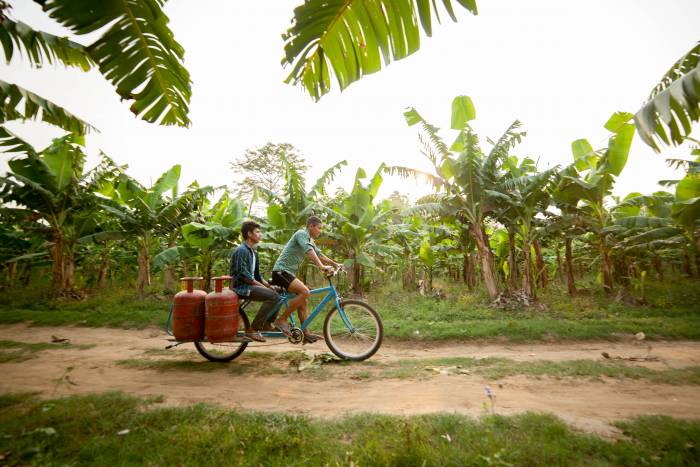 Because bikes in Nepal carry everything from fruit to fuel tanks, the bike Spear envisioned allowed for additional cargo hauling capacity. Prototypes were eventually made and thoroughly tested. But just as they arrived at a final design, the entire project came to a grinding halt.

The earthquake that devastated Kathmandu in April 2015 may have derailed their bike project, but it was the catalyst for another positive opportunity. As the Spears rushed to help their neighbors living in open fields, they realized they had the ability to use their newly minted manufacturing facility to built temporary metal shelters. 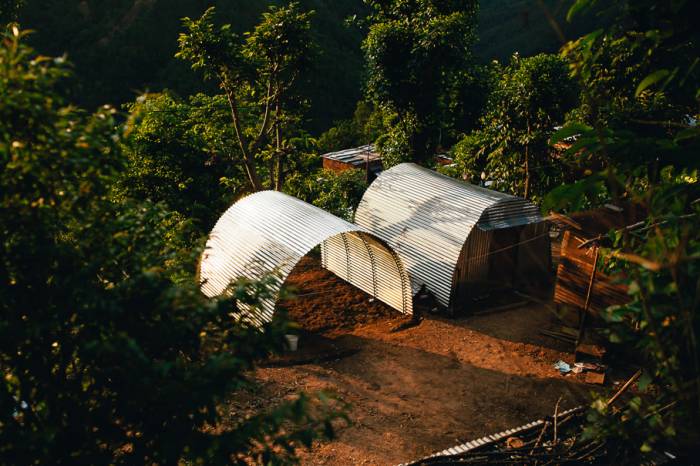 By June, they had built and delivered nearly 600 shelters and facilitated the distribution of 4,678 more. What started as Portal Bikes became Portal Shelters. That too underwent its own evolution.

With the country on the mend, there was a pressing need for permanent structures. After one more trip to the drawing board, Portal Prefab was born. Like giant flat-packed houses, Portal Prefab structures are now used as houses and schools. They’re inexpensive, easy to transport, and set up in a day. All the while, the Portal bike program sat on the back burner. 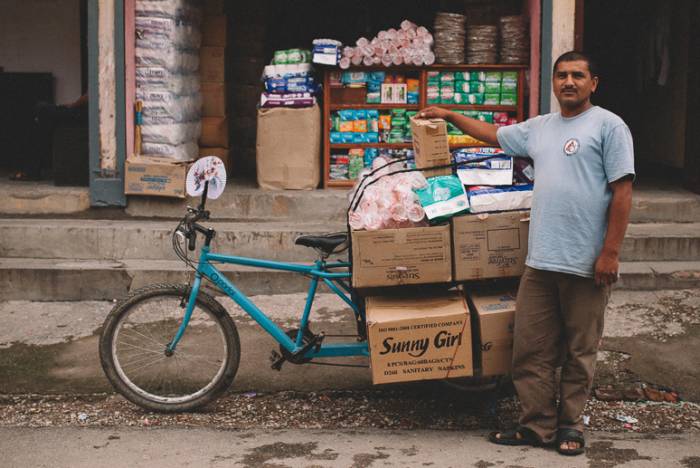 Then in September of 2017, the pair finally launched their first round of Portal Bikes. With frames made in India and parts sourced from reputable suppliers throughout Asia, their hand-assembled cargo bikes started to hit the streets of Kathmandu. Offered in long- and short-tail formats, the modular design accommodates a wide range of racks, running boards, and bag options.

With its mission as a workhorse, the Portal team engineered its bike to withstand 300 pounds of cargo — plus a rider. The front fork is wide enough to fit a 4-inch fatbike tire, and the steel frame is festooned with rack, fender, and bottle attachment points. The design permits the use of disc or rim brakes in the rear, with a cable-actuated disc brake on the front wheel. With the electric-assist craze in full bloom, Portal had the forethought to include hard-points to mount an aftermarket battery. 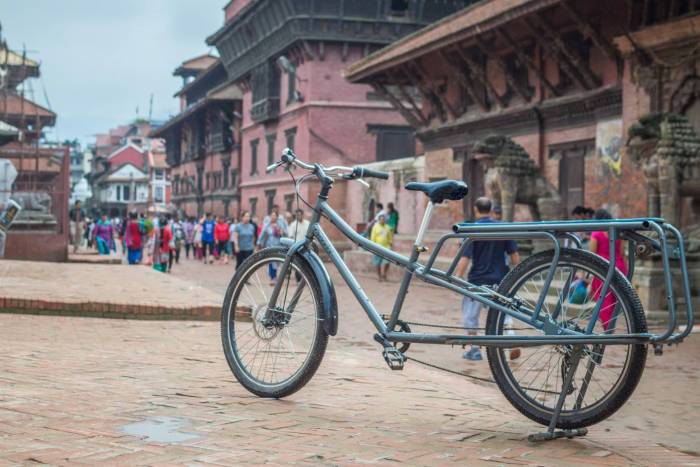 Both the long- and mid-tail bikes ship with a seven-speed drivetrain and a single chainring up front simplifies the mechanicals. The range of fitment was an initial concern considering the average height of most Nepalese is — less than tall. An extra-long seatpost and slack seat tube angle help fit long legs.

With all of the design hurdles overcome, price proved the most difficult target to hit. Building a cheap bike is not hard. But building a good and cheap bike using parts and materials sourced from socially and environmentally sound resources is not easy at all.

To make a Portal Bike attainable in the local market in Kathmandu, the price can’t exceed 40,000 rupees, or $400. That requires a flexible sales and distribution network and a creative business model.

Portal Bikes: From Nepal to the US 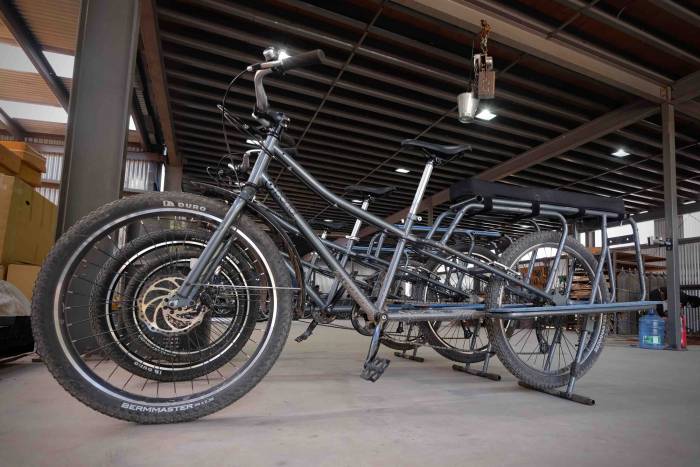 The Portal plan is to expand its sales footprint to Europe and North America, where revenue can help subsidize a lower purchase price in its home market. As of April, Spear was plotting his American distribution strategy. If all goes well, his bikes will complete the Portal Bikes circle and go on sale in his home state of Colorado very soon.

They are currently available for international purchase, but shipping remains the last obstacle to navigate. Nepal is a landlocked country and not serviced by your local FedEx office. If he can work out the logistics, the landed purchase price will fall under $1,500 — if just barely.

It has been a long and shaky journey for Portal Bikes but momentum is now on their side. And it all started with a simple idea to make life a little easier. With all they have accomplished and overcome, they didn’t forget the flashpoint of it all. The finished bike design includes mounts for an optional PTO drive as well as a thumb-saving corn sheller.

Check out the Portal Bikes online to donate to the Portal Fund or inquire about purchasing your own bike.

Author Bio: Christophe Noel is a freelance journalist, photographer, and general vagabond. A seeker of stories untold, he can often be found with a map in hand, lost, in the most remote corners of the globe. The founder of Clean Drink Adventures, he believes in the power of the traveler and doing good as you go. www.cleandrinkadventures.org

Up Next: How to Dial the Perfect MTB Tire Pressure

Saving…
How to Dial the Perfect MTB Tire Pressure
Bikepackers Rejoice: A Journal Just for You
×