Home » Slacklining » Life At The Edge: The Art Of Human-Powered Slacklining

Human-powered slacklining is simply walking a slackline anchored by people. It’s an incredible display of teamwork and skill. This week, two world records in the niche activity fell that made our jaws drop. 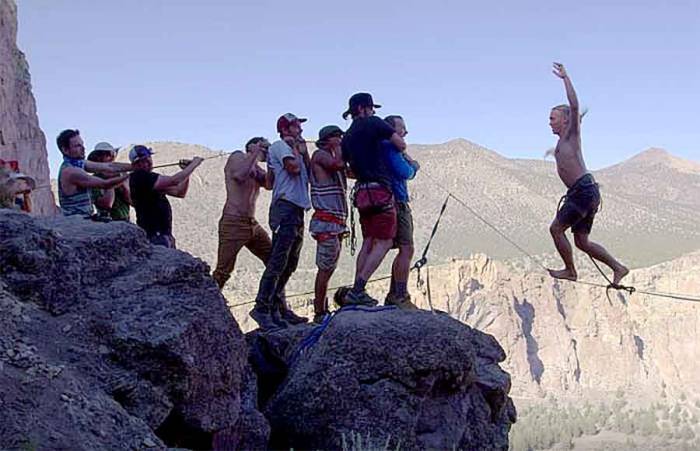 Since world-famous slackliner “Sketchy” Andy Lewis appeared on the Super Bowl halftime show alongside Madonna five years ago, there has been a meteoric rise in both the number of slackline participants and their skill level.

Highliners have walked between hot air balloons and pushed the distance to over 1,000 meters (yep, you read that right!). But this week, two slackline records were broken that had us at GJ asking “WTF?”

We turned to Staff writer (and YogaSlackers founder) Jason Magness to get answers.

What is human-powered slacklining?

Simply put, it is just the same as slacklining, except that instead of anchors (trees, poles, bolts in rock) at each end of the line, we just use people to pull on the line and give it tension.

Why is this even a thing?

Well, I/we (YogaSlackers) have to take some credit/blame for that. Back in 2011 we put out a video of what we think was the first human line. We were pretty into it for a couple of years, setting the early world record of about (40 m) and the first all-female WR (26 m), which had only women involved in anchoring and walking.

We even used it to do a few waterlines at festivals where we were not allowed to anchor to trees. Most people back then thought it was pretty stupid, but it was a great exercise in teamwork and trust. Even back then I imagined it was only a matter of time before it went longer and higher.

Is it more difficult?

In short, yes. It takes a lot of people. The longer the line, the more people required to pull on each side. And the anchors (since they are people) can and do move a little. It can also be painful on the people pulling the line. We used to do human lining as a part of a live stage performance (0:58 and 1:07), with only 3-4 people on each side. 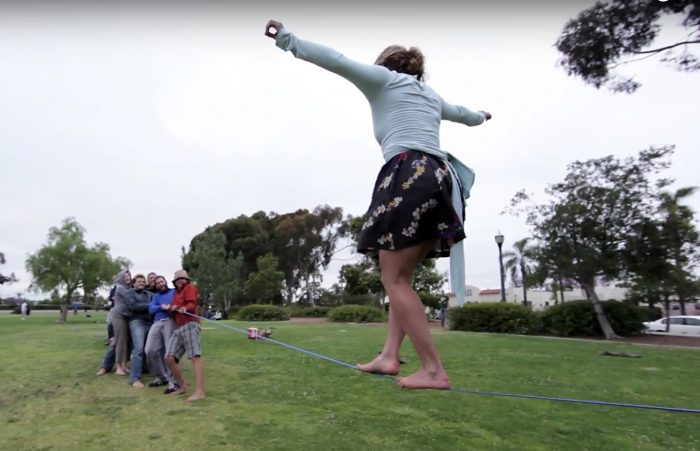 There was some pain tolerance required for the pullers for sure.

It is also challenging to find suitable spots to do this. The crew in Bern was able to go so long because they were in a huge natural bowl, and even with 40 people on each anchor it was hard to keep the line off the ground when the slackliner was in the middle of the 330-foot expanse.

What about the danger – what if the highliner were to fall and pull people off the cliff?

Great question. I am good friends with the head rigger [from the Smith Rock record], Ari DeLashmutt, and they were really safe. Despite the fact that it was only people anchoring that line, they had backups just in case. And the human anchors that were close to the edge were also clipped in.

Do you see this as the next frontier in slacklining?

No way. It is an amazing exercise to be a part of – the logistics, teamwork, commitment and manpower required are immense – so when it works it is very satisfying.

But I’ve spent enough time as a human anchor to know that it is not nearly as fun as walking the line. Huge kudos to all those involved in setting these new records, though. Happy to see Human-Powered Slacklining pushing the limits!

Up Next: 1948 Canyon Crossing Repeated On Highline