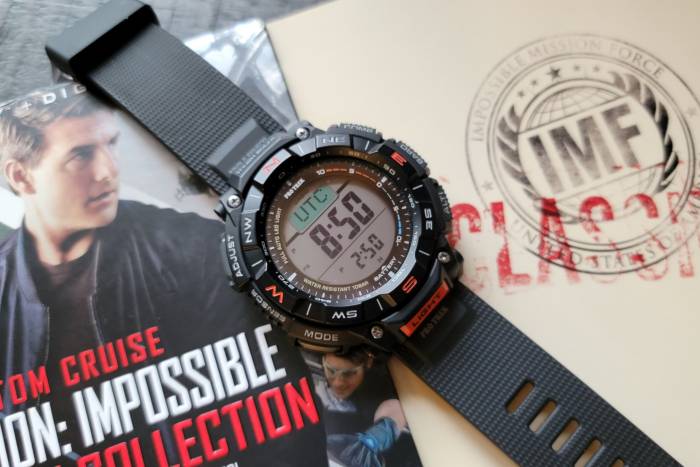 Loads of gizmos, built for adventure, and charmingly ugly, the Casio ProTrek PRG340-1 is mission-ready.

Stunts, chase scenes, exotic locales — when you think of the Mission: Impossible movies, certain set pieces come to mind. But among EDC enthusiasts, this film franchise has another calling card: Ugly but charming (“chugly”) wristwatches.

Now, the ProTrek PRG340-1 ($280) hasn’t technically been featured on the silver screen. But in my mind’s eye, this new Casio would be perfectly at home on the wrist of an IMF agent.

It’s got all the features a good super-spy needs: solar charging, a compass, barometer, and altimeter, and enough alarms and timers to keep your world-saving plan on track. Plus, it has that bulky, utilitarian look I’ve come to expect from Ethan Hunt and his team.

So when the offer to test drive the watch came through, I half-expected the email to set my computer on fire. This, thankfully, did not happen. But a certain theme song may have played in my head as soon as the tester arrived. And over more than a week’s worth of wrist time, the tune never quite managed to fade.

In short: The Casio ProTrek PRG340-1 is an excellent adventure watch, fully equipped for various situations. Its massive numerals and easy-access functions make it a breeze to operate, in a package that wears somehow smaller than its dimensions. It’s attractive, feature-rich, and let down just slightly by its materials and finishing.

Do you want other people to be able to read the time from your wrist, halfway across the room? Then the PRG340-1 is your watch.

The central numerals dominate the ProTrek’s display, which is somewhat smaller than its nearly 55mm length would indicate. Yet despite its size, the watch wears surprisingly well.

Its case rises 15.1 mm from the wrist, and the band dives down from the lugs with a comfortable grace. There’s also a model with a titanium bracelet, for an upcharge of $50.

Casio aimed to make the ProTrek equally as easy on the environment. The company website states that the PRG340 line uses biomass plastics that don’t sacrifice comfort.

Corn, you say? Well, I guess even a super-spy needs to have their vegetables. But as cushy as the band may be, I’m more impressed with the various gadgetry.

The PRG340-1 comes with three major sensors: a compass, a barometer, and an altimeter. This leaves out the atomic timekeeping found on its recently reviewed cousin, though the solar charging remains.

Each of these is available with a press of the corresponding button on the watch’s right-hand side. There’s also a two-way rotating bezel, something the analog/digital PRW6900YL-5 lacks.

But the star here is the screen. Per Casio, “The duplex LCD lays out separate layers for the compass graphics and the clock functions, enabling a larger compass display for better legibility and easier navigation in a design that is both functional and beautiful.”

It’s fairly impressive to see this layering in action, especially knowing that there’s a solar panel lurking somewhere behind. Some digital watches can be difficult to read at an angle, especially when driving or wearing sunglasses. Not so with the PRG340-1, despite its technical complications.

And speaking of brightness, check out its double LED.

From a technology standpoint, I think this ProTrek lines up with its price. Unfortunately, it’s let down just a bit by the plastics surrounding said tech.

I’m all for the use of environmentally friendly materials, and for this, Casio gets something of a pass. But there’s also a slight touch of button-wobble here, and the chassis feels similar to that of a basic Tough Solar Sport.

Are the biomass plastics better? Yes, I’d say so. But whether or not they’re $200 better is up to the buyer to decide.

Speaking of the number 200, it would be nice to see a higher water resistance here. Still, 100m is solid, and I understand that the sensors likely prohibit a better rating. And the PRG340 will do something that even most watertight G-SHOCKs won’t:

And all jokes aside, this is actually a nice feature. It means that you can set the watch on a table while fist-fighting with an assassin or terrorists, and still be able to glance at the time.

Reading through the product description, it’s clear that Casio is selling the PRG340-1 as an adventurous, outdoorsy watch. And truly, it is. But for me, this is secret-agent stuff all the way.

With its massive numerals, technical credentials, and intuitive layout and interface, the ProTrek PRG340-1 has all the makings of a long-term, go (almost) anywhere companion.

The use of biomass plastics is laudable, even if they leave the watch feeling just a touch on the side of toy-like. But in my book, the overall comfort and functionality make up for it.

Now, stand back — this review will self-destruct! 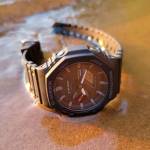 It’s not every day that you get to handle an icon. Still rarer are the times when, through some whim of the universe, you’re offered the chance to evaluate an upgraded version of a classic. Read more…