My dog snapped the leash attachment ring on her Fi Smart Collar less than 3 months after I got it. So I spoke with Fi to get to the bottom of it.

Editor’s Note: Since publishing this article, Fi has improved the attachment point of its collars. It now uses a heavier stainless steel ring that seems much stronger. See the photo of the new ring, below. The new ring is clearly superior to the old ones. It’s nice to see a company make improvements due to consumer feedback. That said, other comments note that the collar can break between the plastic and metal of the tracking device. At this point, we recommend using the Fi as a tracker only and using a second collar or harness for security.

The rest of the article below refers to the old collar style.

For a little under 3 months, I’ve been testing the Fi Smart Collar. The collar has some neat technology that allows you to track your dog’s GPS location with your cellphone. All that is well and good, and I wrote about it a ton on my first review, here.

But last weekend, the D-ring that attaches the collar to a leash snapped clean in half after a big tug from my overzealous (but only 40-pound) German shorthair pointer puppy.

Thankfully, we were in a park and she was also wearing a training collar, so I could recall her quickly. If it had happened near a busy road, the gear defect could easily have led to disaster.

I’m not going to go into the review of the Fi Smart Collar’s tracking and notification features here; I covered that in depth in an earlier review. But suffice to say it works well, and I really like the security it provides my pup.

And this is in part why I’m so disappointed.

Fi chose to use a zinc-based alloy called Zamak 2 for its D-ring on its collar. We reached out to the brand when the collar broke, and its CEO quickly (and politely) responded.

If you’re like me, you probably don’t know much about Zamak 2. Fi’s CEO, Jonathan Bensamoun, explained that the brand chose to use it for its collars because it “provided a good combination of resistance and design abilities. Zamak 2 is a very well-known metal that presents the strongest resistance for these use cases,” he wrote to me in an email.

That may be the case, but after looking into Zamak 2 on some metallurgy websites, I found it is weaker than stainless steel by just about every measure. More imporantly, the D-ring just seems thin compared with those in most professional-use collars. Compare it with the D-ring on the burly collar I got from a dog trainer, below.

In Fi’s defense, its D-ring is used on many collars at big brands like Petco, Bensamoun explained.

“The manufacturing line we use for these parts are the same used by Petco and other mass collar manufacturers. We would never work with a vendor that is not already proven in the marketplace and put dogs at risk,” he wrote.

Fi asked me to send the collar back so it can examine the broken D-ring. I will update this article with any more information from the brand once its investigation is complete.

How the Collar Broke

Even though my pup is still not very big, she’s spunky! I’m working hard to teach her proper casting with a whistle and check cord. I’m also working on her on-leash heeling. She’s doing well but still tugs hard from time to time. 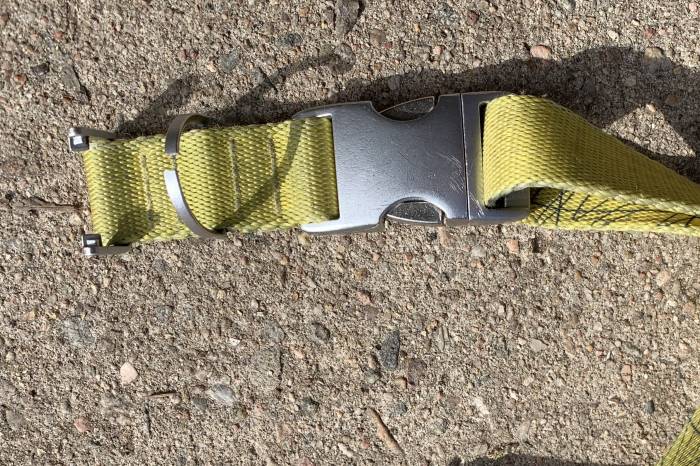 That was the case on Friday. After work, I took her to the park. Of course, there was a flock of 100 geese, and she wanted to get at them. All it took was one final tug, and the cord went limp. It felt like losing a fish. And then a bit of horror set in as my 7-month-old, modestly trained puppy bolted across the park in the middle of a city.

A few vibrations on her training collar got her attention, and within a minute I had her back at my heel. Good dog!

But I shuddered to think of what would have happened if the failure had occurred just a few minutes earlier as I’d crossed a busy city street. Out of all the tugs she’d put on the collar over 3 months, this one happened at one of the safest times.

I counted my blessings, cursed the collar, and headed home.

What’s Next for Fi

A dog collar is a safety device like a seatbelt. It keeps your dog safe when it wants to run, and it keeps other people safe from angry dogs. And it cannot physically fail.

Fi’s CEO noted that it’s very hard to have perfect quality control in manufacturing, and I appreciate that challenge. But the Fi collar I have been using didn’t strike me as defective when I received it. It just seemed weak, particularly in the D-ring. And while the brand pull-tests its collars to 100 kg in manufacturing, that really isn’t much force for a static impact. Climbing carabiners are rated into the thousands of pounds for a reason!

Fi made a very cool, techy product. But I’m leery of its ability to control a powerful dog. Given that I already paid for a year’s subscription, I’ll likely still use it as a tracker on my dog. But I’ll always use a different collar to attach a leash. And for $150 for the collar and another $100 for the subscription, this is a bummer.