The Fenix 3 by Garmin is made for the outdoors as well as fitness. Our contributing editor put it to a test last month on Mount Rainier. 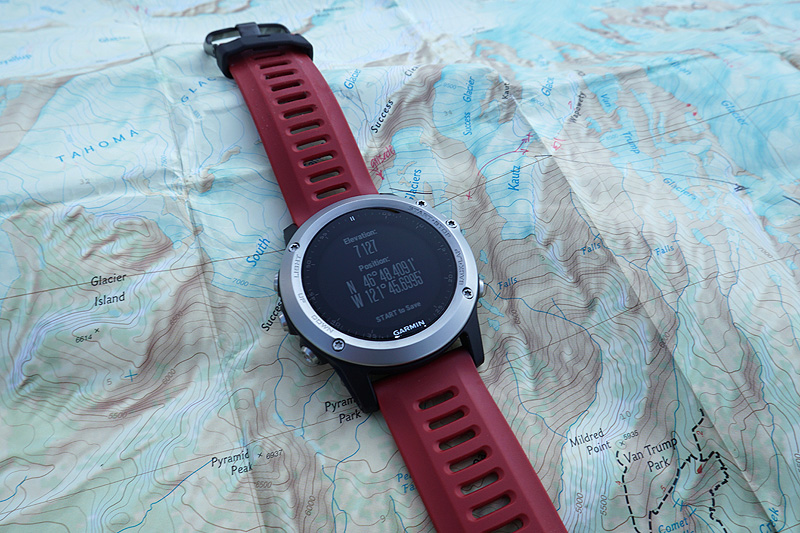 Not really lost, but unsure where to go next, a spiny ridge blocks our route. We have to drop down… but where are we precisely?

Before I left home to ski around Washington’s Mount Rainier, I had loaded our proposed 24-mile route into the Garmin Fenix 3. We’d been using the watch as a primary navigation tool with the map: Turn on the GPS, press a button, and smile as a calculus of latitude and longitude illuminate the watch, the pieces falling together to reveal our route.

The Fenix is Garmin’s outdoor GPS watch. This upgrade adds a silver-dollar size screen infused with Bauhaus utopian design. But under the elegant bezel, the watch packs a girth of features any outdoorsperson can count on for the mountain or the woods.

Who’s It For: Runners, swimmers, cyclists and general outdoor enthusiasts.

The Basics: The Fenix 3 is a little bit outdoors and a little bit sport. Fortunately neither is at the expense of the other, and it’s all pretty easy to access. Using the two left buttons, you scroll through a series of menus, including steps taken, altimeter, barometer, compass, and temperature. With Bluetooth enabled and the watch connected to a phone, you can also access music controls, weather info, calendar, and notifications on emails and texts. 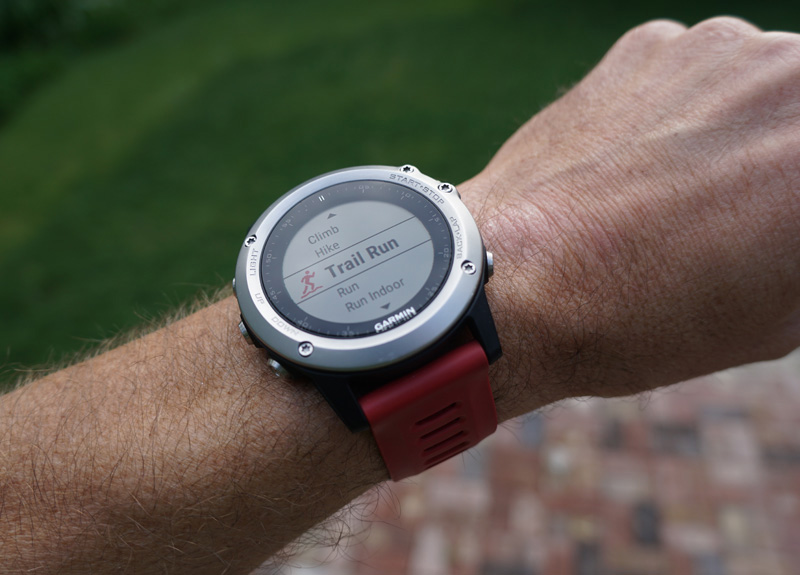 Each activity app comes with unique profile specific to that mode. So the climbing app will display elevation, ascent and descent profiles front and center, while the running app will show distance, timer and pace on the front screen. You can configure up to 10 additional screens to display data, such as distance, time, speed, and elevation, as you want to see it.

Pair the Fenix with ANT+ training sensors (like foot pods and HR monitors) and it can track additional bio or cadence metrics. I used Mio’s Link and had zero issues capturing data. Enable wifi and your stats will automatically load to connect when you step within range.

Apps For Your Watch

Garmin created an online app store for developers to post their own third-party apps. Here is a quick rundown on what this offers users: 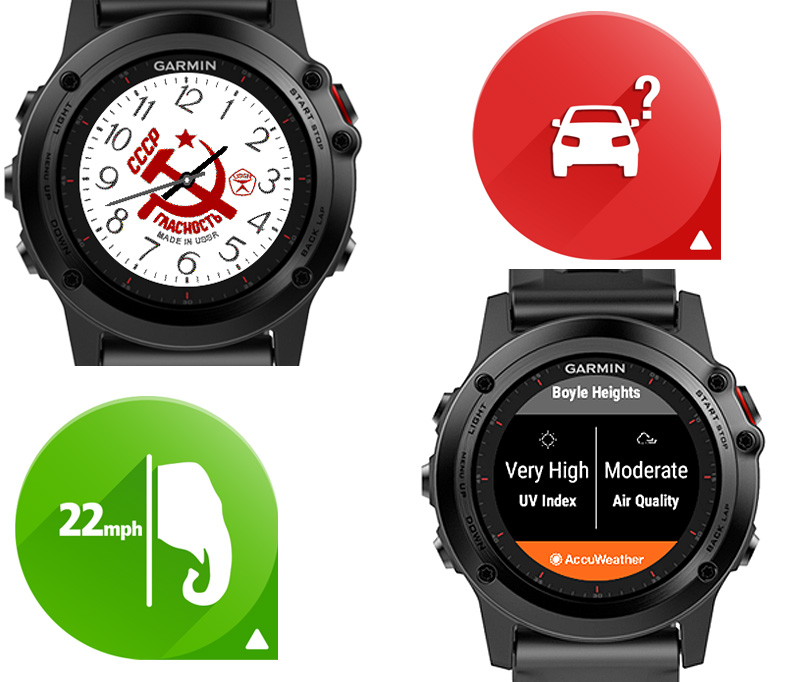 If you’re serious about training, you’ll want to analyze your data. And the Fenix 3’s true power is revealed when synced to the Garmin Connect portal. Connect is where users can upload training data and tease out stats and splits, including mph, cadence, pace, temperature, elevation profile … or if you’re feeling competitive, see how your stats measure against the best in the ‘hood.

I’ve shared a section of the data captured during a run below. Mile-by-mile my data is available under “splits.” 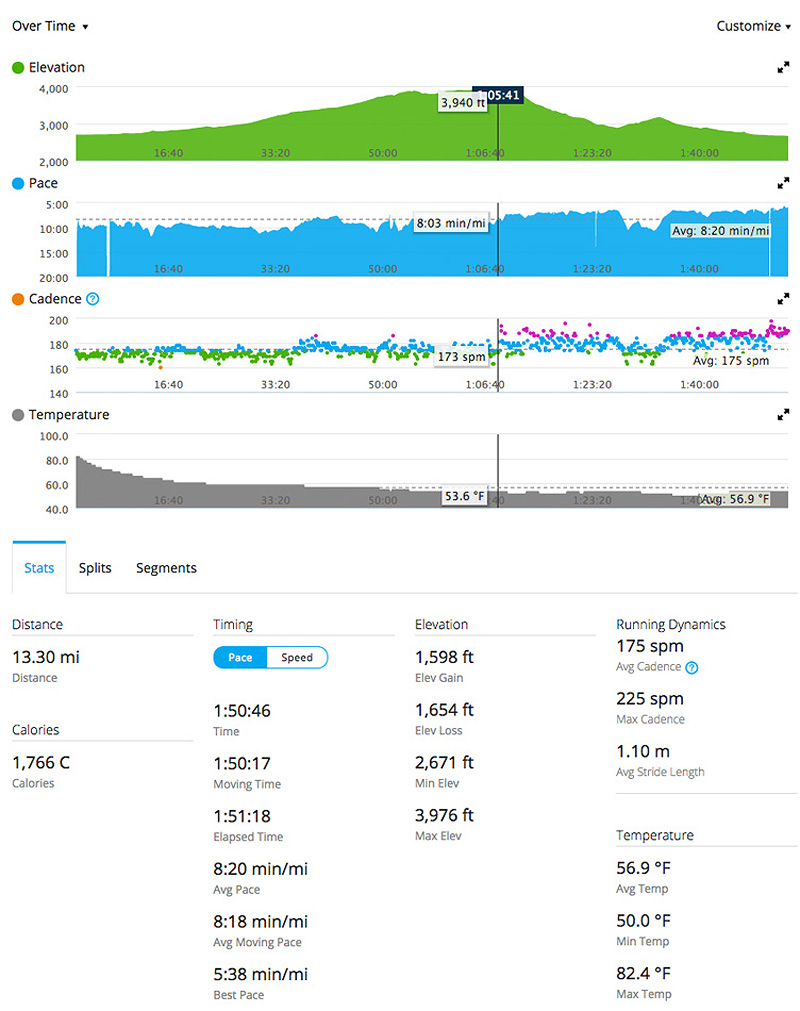 Garmin has integrated its new (and reputedly the strongest available) EXO antenna into the bezel of the watch. The company has also licensed the Russian navigation system GLONASS, which provides access to more (Russian) satellites. Together, this reportedly gives the Fenix location reads quicker and with more accuracy.

Curious about the upgraded navigation features, I snapped a 17.89-mile course through Garmin Connect and loaded it to the Fenix. Then I cross-checked my distance with three other devices on a run.

In other tests, I found the Fenix tracked a bit shorter on switchback trails and trails that duck under forested canopy. Not a big deal, and on par with other GPS tests in my experience.

What I Love About the Fenix 3

To my surprise, the Fenix 3 didn’t automatically adjust as I traveled across time zones. To my greater surprise, it autocorrected after two days in the field. I had to manually change the zone back.

The watch is unisex, with no women’s model. While the band fits almost any wrist, the face can appear huge on a smaller person.

Unfortunately, Connect IQ apps can’t access Garmin’s Connect data. This data is considered proprietary and apps, being 3rd party, don’t have access to it without paying a fee.

You can only run one app at a time, including the native sport mode apps. Third party apps leverage the same computation requirements that the native apps need to tap.

In a market where most smart watches transmit instant messages from your phone to your wrist, the Fenix 3 gives the facade of a mild manner business watch, concealing its weekend-warrior superhero persona. And that’s really the draw to the Fenix 3: It doesn’t look like a wrist-mongering dive watch or high-tech wrist computer. But with a simple press of the index finger, the Fenix 3 unleashes its inner beast and gets right to work.

Pairing its good looks with Garmin Connect, the Fenix 3 hits the hat trick between beauty, brawn and brain, bridging the gap between the heavy lifting required by outdoor activities and fashionable tech. And because it can interact with both IOS and Android phones (and can communicate to the internet and a desktop computer) we find it much more robust than its predecessors and much of the competition.

Who Should Buy It

People who want one device to wear to work, at the gym or in the hills. Users who like to geek out on data, tracking and splicing personal stats.

If you are looking for higher mapping quality, give Garmin’s newly released Epix a peek, which offers 100K full color topo maps. For more day-to-day smartwatch capabilities–and something with GPS but more comparable to the new Apple watch–the touchscreen Vívoactive ($250) is an affordable and useful entry point for the active lifestyle user.

Up Next: How Swedes Deal With Bears