Home » Travel » The Last Reindeer Riders: Expedition to the Tsaatan of the Taiga

The Tsaatan tribe in Mongolia lives in harmony with the reindeer they raise. They are among the last nomadic tribes rooted in this historic relationship. I traveled to Mongolia to learn more about their culture. 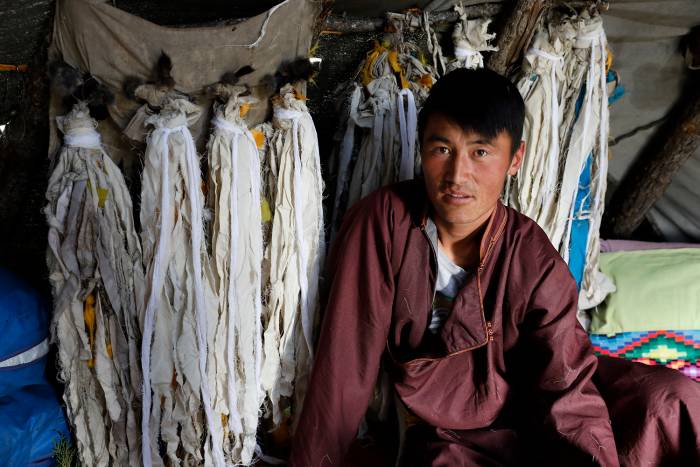 I raced in the world’s longest and toughest horse race, the Mongol Derby, in 2012 to follow a passion for exploring the world on the backs of spirited horses. While racing, I found Mongolia one of the wildest and freest places on the planet.

Curious to know more about the unique cultures within Mongolia, I came across a book by Jimmy Nelson, “Before They Pass Away.” A photograph of the Tsaatan tribe riding their reindeer captivated me. The photo compelled me to meet them for myself while their way of life still exists.

A year later, I returned to meet the last reindeer riders. Using skills honed from growing up on a horse farm in Missouri, I began leading expeditions to their camps.

Each passing year has led me deeper into their rare culture, giving me insight into the struggles they face living in one of the harshest environments on the planet, high up in the mountains that span the Mongolian-Russian border. Only around 44 families remain. 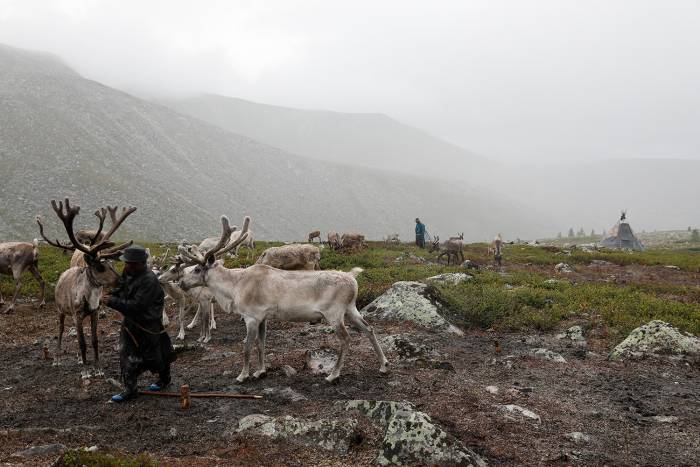 Aid to the Tsaatan

This summer, I set off with the goal of bringing support to the younger families. After a month and half of prep work, my team joined me. We had Tracy Stephens-Kelly, a veterinarian from Texas who brought medical aid to the animals, including surgeries, ointments, and product education.

Her daughter, Ragan Stephens-Kelly, an endurance horse rider, aided with veterinary services and wrangled horses. Roberta Macleoud, from Australia, served as a health consultant to the families. Ruby Klues, from Boston, aided in camp wrangling and meal prep. Finally, we had Byeronie Meir, from South Africa, an endurance horse rider who helped install solar units.

The journey involved a charter flight to the village of Murun, two days off-roading in a UAZ-452 Russian Furgon, and two days riding the semi-wild horses of the Darkhad people. I called my Trango 2 Tent home, thankful for the thickness of my HyperLamina Torch sleeping bag! Four days later, despite everything Mongolia could throw at us, we arrived high in the clouds at the summer camps of the Tsaatan with all our supplies in tow. 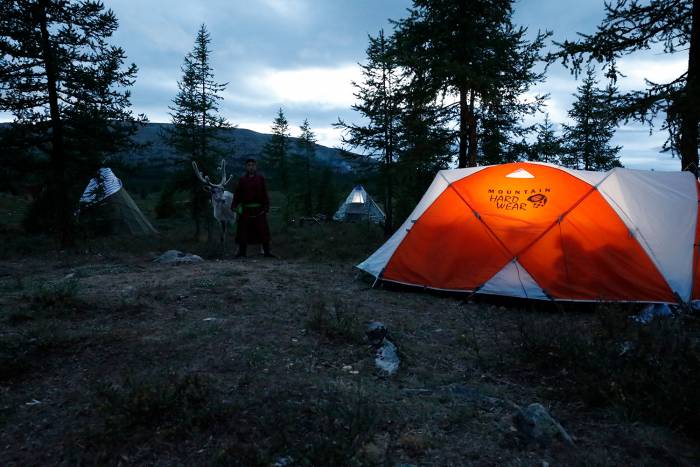 After meeting the families, we set to work. Tracy barely downed a cup of reindeer milk tea before she picked up her Leatherman and set out to work using the knife function performing cancer-removing surgeries on the reindeer. She explained the uses and applications of the different topical ointments she brought for them. The families then had a chance to ask her expertise on veterinary medicines available in their village. 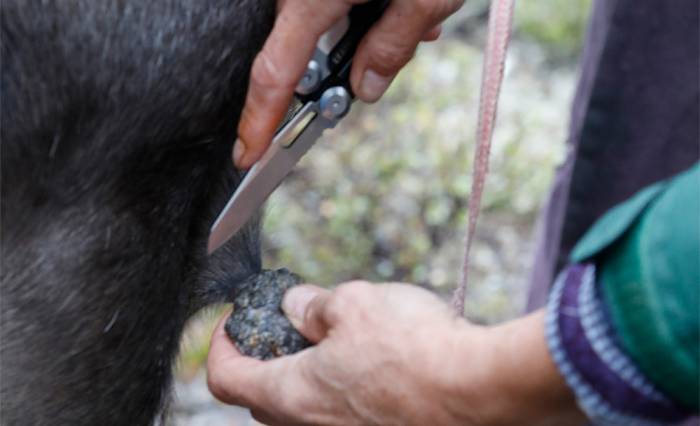 The culture of the Tsaatan is centered around their reindeer. The animals are at the core of their shamanistic beliefs to basic survival needs (milk, cheese, yogurt, meat, and transportation). They’re the only reindeer herders left in Mongolia. They are also the only people on the planet that still ride reindeer as their main form of transport.

When we asked Otgontsetseg which she prefers to ride, a reindeer or a horse, she replied, “A reindeer, of course. It’s like driving a Land Cruiser.”

On the Move With the Tsaatan

The tribe’s main goal is to increase the size of its reindeer herds. Their reindeer face many challenges: infections due to wolf bites, bleed-outs due to broken antlers, and a warming planet consequently forcing them to move higher and higher to cooler pastures each summer.

When the Tsaatan move, they pack literally everything they own atop their reindeer. Compatibility becomes a priority. I followed suit, using my Skarab 32 to efficiently carry my daily necessities. 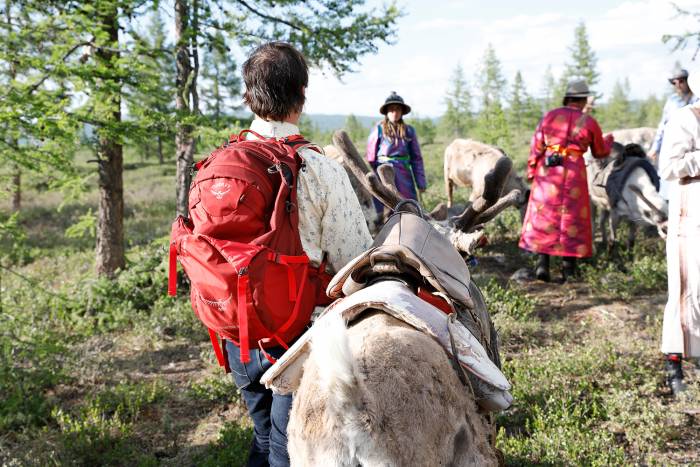 We brought a few of the families an upgrade to their current solar kits in the form of the BioLite SolarHome620. Prior to the BioLites, they were using candles and bulky solar panels hooked up to old car batteries. The BioLite is small enough to fit in a shoebox yet is powerful enough to light three teepees simultaneously.

Evenings, we joined the Tsaatan for a game of cards, illuminated by the daisy chain lights. The BioLite Smart Hub enabled Ganbat’s brother, Tulga, to charge his phone before making the two-day journey to the village for supplies. 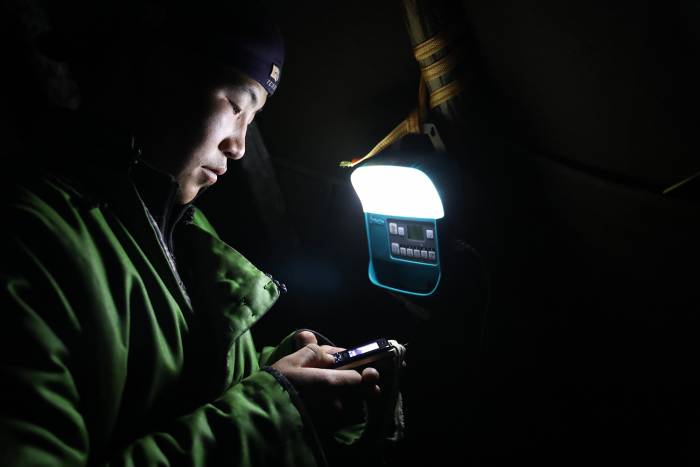 We spent half a day migrating with the Tsaatan to their winter pastures. Because the move involved dismantling their teepees, it became the perfect time to distribute the 20 Leathermans we brought. The Tsaatan hadn’t seen a tool like this before and made quick use of them — cutting wire with the Wave, dismantling teepees with the pliers on the Skeletool, and repairing the reindeer pack saddles the built-in screwdrivers. Once packed, we herded the loose reindeer as they darted between boulders and hid behind pine trees like alley cats.

It was raining when we arrived at the winter camp. I was grateful for my Finder Rain Jacket and waterproof Stretch Ozonic Pants from Mountain Hardwear. We presented Ganbat’s family with upgraded waterproof teepee fabric we sourced from Murun’s black market for about 800,000 Tughriks ($300). Together, we carefully constructed the new teepee, wrapping the fabric in layers around tree limbs to keep wind and water out.

True to tribal customs, we gathered inside the main teepee and listened as Otgontsetseg’s father, Tumruu, recounted stories of his youth growing up — evading bears, chasing wolves, and migrating across the Taiga with his reindeer.

According to Tumruu, much has changed since his youth. Though summers are hotter, and they have to climb higher, a rapidly modernizing Mongolia allows them to become more efficient through technology. Access to cell reception helps them to find safer routes and share information on illnesses affecting their herds. 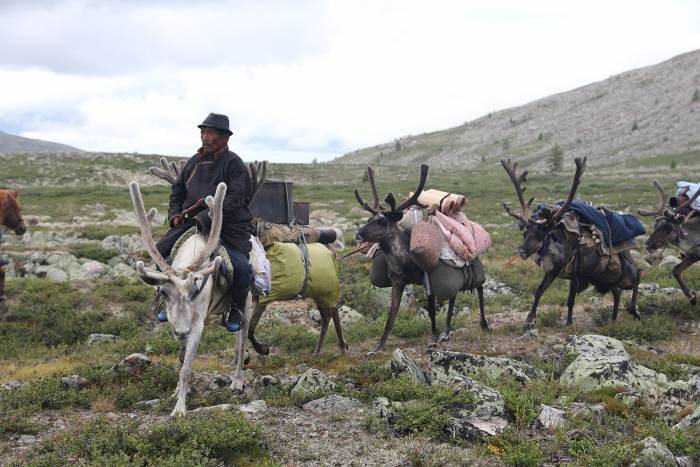 Though the Tsaatan people are evolving, their strength in unity remains. They tackle problems the way they always have — as a community. This summer was a cause for celebration as the tribe collectively amassed 2,000 reindeer, a goal they had been struggling to reach since I first met them. As a personal mission, I will continue leading expeditions to support the sustainability of this inspirational people.

Erik Cooper is a 34-year-old adventurer born and raised on a horse farm in Missouri. He is currently based in Los Angeles and works as a freelance correspondent for GearJunkie as well as an event manager at the Mongol Derby.

Up Next: Space-Saving Racks & Packing Hacks for Road Trippers